Did you and your family enjoy watching the World Cup this summer? Is your child eager to play soccer? If so, the following is information about Los Alamos Youth Soccer programs. We hope to see you out on the fields!

Programs range in cost from $75-$275. Players on either the Pre-competitive or Competitive teams must purchase uniforms separately on soccer.com. See the link for more information. http://www.laysl.org/general-information/overview-and-pricing

The amount of time involved increases as a player goes from the recreational to pre-competitive to competitive programs. Recently we’ve made changes ​to the ​Recreational​ Program. It is our largest program and spans the U7 through U12(Kst grade-4th-5th grade) age groups. ​It is cheaper! ​$75 for kinder for a full year, and $100 for all recreational players. ​Recreational programs include a shirt with registration fees.  ​

We have a separate kinder program, which has fun games and allows all players to touch the ball and have fun. We rarely have enough players for rec above u11 so we transition them to precomp teams when possible. There are no tryouts for recreational teams. Typically, the teams are coed and practice twice a week.

Teams have games once a week on Friday evenings in Los Alamos and White Rock. The season runs approximately one week after school starts until the end of October and picks up again in spring after spring break until late May.

Practices are either in Los Alamos at Barranca from 5:30-6:30 on Monday and Wednesdays and on Tuesday and Thursdays at Overlook Park for White Rock teams.

Pre-competitive​ teams are generally formed for the U9/U10, U11 and U12 (typically 3rd-5th grade) age groups, and sometimes the U13/14 age groups. ​The season usually runs when school starts in fall until mid November and then again in March until mid May.​

The pre-competitive teams are a nice transition into the competitive program. There are separate boys and girls teams in the pre-competitive program and they play in the Santa Fe Northern League with games in Santa Fe and Los Alamos on Saturdays. Practices are usually twice a week with one in Los Alamos and one in White Rock. Some scrimmages may also be scheduled in addition to practice. They may also play in tournaments throughout the year, typically in Santa Fe or the Bernalillo/Albuquerque area, but some may involve travel out of the state (e.g., Durango, Colo.).

Competitive​ teams play in the Duke City Soccer League, the most competitive league in the state. ​The season usually runs in August through late October during the fall season and resumes in the spring, from February through early May. ​Players are expected to commit to the team, to be focused and serious at both practice and games, as well as  genuinely wanting to improve their level of soccer play.

In addition to local teams from both Albuquerque and Santa Fe, teams also travel from as far away as Las Cruces, El Paso and Durango. Competitive teams typically play in several tournaments each year. Both the boys and girls Competitive program start at the U11 or U12 age level. Tryouts for the U11 through U14 competitive teams are held annually in mid May. Practices are usually 3 times a week for 90 minutes per session.

Location of practices are at the discretion of the coaches but are typically split between the Los Alamos and White Rock locations. Spring-only competitive teams are formed for high school players and the tryouts for the U15 through U18 age groups are typically held in November. Competitive club costs in many states can run into the thousands of dollars in terms of cost. 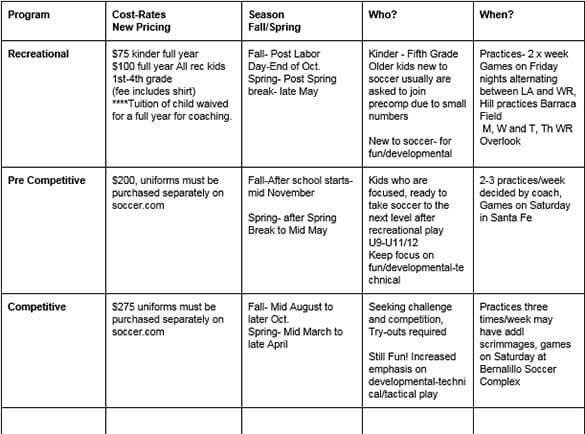 ** FYI WE ARE IN NEED OF COACHES FOR ALL LEVELS. COACHES GET FREE TUITION FOR ONE CHILD FOR FULL SEASON, HALF TUITION FOR FALL OR SPRING.