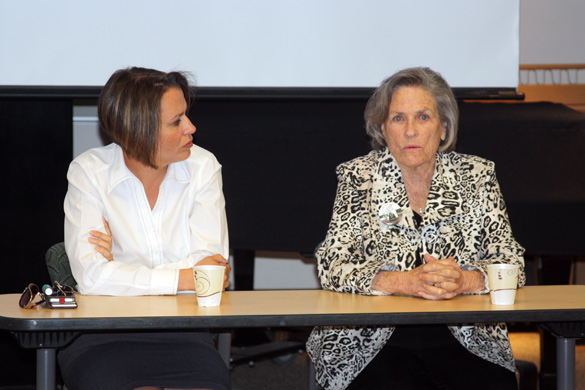 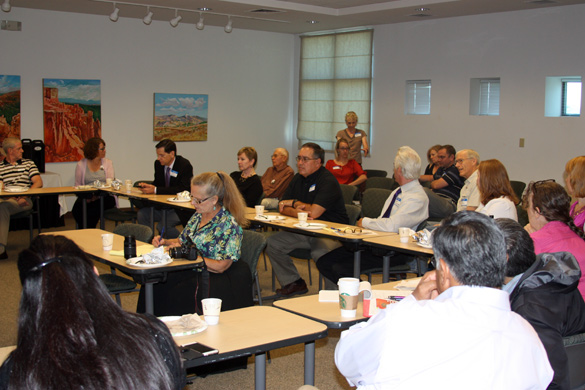 Papen and Richard serve together on the New Mexico Jobs Council, which Papen co-chairs.  The Council, formed in 2013 is a special legislative committee because it includes five members of the public, including representatives from business and labor, as well as legislators, Richard said.

The Jobs Council helped to draft the bipartisan jobs legislation signed by the governor  in June. It increases tax credits for companies involved in technology as well as incentives for investments in start-ups and other incentives intended to encourage both start-ups and existing businesses to come to New Mexico and to help existing New Mexican businesses.

The goal of the Jobs Council is to facilitate the creation of 164,000 jobs, Papen said. June marked the 32nd month of job growth in the state, however growth has been very modest so far, Papen said.

Bringing this kind of economic growth to the rest of New Mexico is hampered by lack of funds, Papen said. “Oil futures have gone down and we’re going to have to develop new sources of funds,” she said.

One area that requires investment if New Mexico is to compete for businesses is education. “We need an educated workforce,” Papen said.

Gillian Sutton of KRSN Radio asked Papen about vocational education. Richard and Papen said most of the education dollars are going to STEM (science, technology, engineering and math) education. Papen and Richard both expressed hope that community colleges can step in to fill the gap in vocational training.

“One of the best auto mechanics programs in the state is right across the street at the high school,” Steinhaus said. “When kids can see real jobs in all areas, it makes a huge difference.”

Carol Rutton of the LANL Community Programs Office said in a recent meeting that Laboratory Director Charlie McMillan made the point that he wishes to see skilled craft workers at the Lab receive the same respect as technical staff members.

“The Jobs Council needs to hear from educators like you,” Papen said.

Another needed change to recruit business is improvement to decaying roadways, Papen said. She suggests raising the gas tax to fund highway refurbishment.

County Councilor Pete Sheehey asked the speakers to carry the message to the legislature that “roads and education are part of economic development.”

According to the speakers, a third stumbling block to attracting and sustaining business is the current tax system. “We need a comprehensive overhaul of the tax system,” Richard said. Calling the tax code “Swiss cheese” because of the many loopholes, Papen said it was hard to get the legislature to work on the tax code because of benefits it gives to their various constituencies.

Jobs Council meetings are open to the public and interested persons are invited to attend, Papen said.