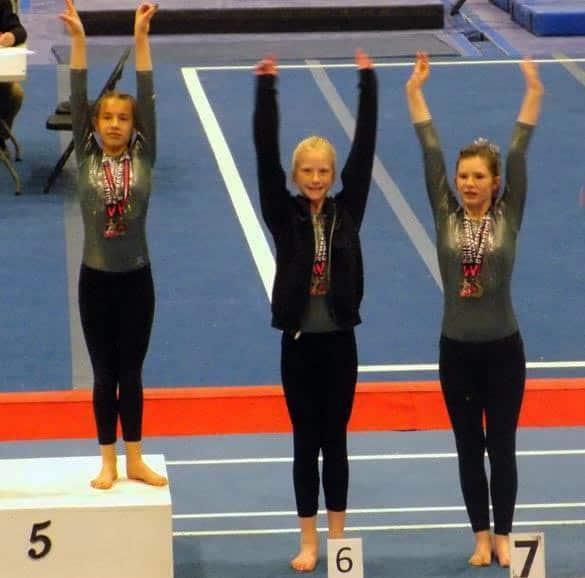 From left, Anika Lovato, Danielle Trellue and Sara Gardner at the podium. During the March Madness Meet at Xtreme Gymnastics in March, Lovato placed fifth all around, Trellue placed in the top 10 and Gardner placed seventh all around. Courtesy photo 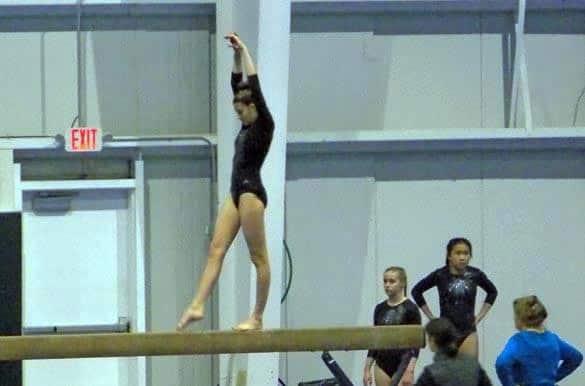 Los Alamos School of Gymnastics Gold, Platinum and Diamond teams travelled to Lafayette, Colorado (Denver) in March to compete against 15 Colorado teams in the March Madness Meet at Xtreme Gymnastics.

Layla Warner had the highest all around total for Los Alamos with a 36.40, which was good enough to take the bronze medal in the junior Gold division. Warner  also took a gold medal on bars with 9.35, and a silver medal on vault with 9.20. Teammate Caris Hatler took the bronze medal in the child’s gold division with 35.60.  Hatler also took a silver medal on vault with an 8.90. Both girls finished in the top 10 on all four events. Kylee Lovato took sixth in the gold child’s division with 34.95. She was fifth on bars with 9.20 and eighth on beam with 8.70.  Aria Warner competed in the gold senior division finishing eighth on vault with an 8.60 and tenth on beam with an 8.60. Ellie Reass also competed.

Los Alamos fielded five Platinum level gymnasts, all in the middle, or junior age division. Anika Lovato finished fifth all around with 35.00.  Lovato took a silver medal  on bars with 8.80, and finished seventh on both beam and floor. Danielle Trellue finished just behind Lovato as eighth all around with a 34.45 total.  Trellue finished in the top ten on all four events. Just behind Trellue, Sara Gardner took seventh all around with 34.35. Gardner took bronze medals on floor with a 9.20 and on beam with 8.85. She was 10th on bars. Megan Brown took the silver medal on floor with 9.40. She was also 10th on both vault and beam. Colette Bibeault took the bronze medal on bars with 8.55 and was sixth on floor with a 9.00. There were 13 teams with 110 platinum competitors, most of them juniors.

The Diamond competition was interesting for Los Alamos in this meet. There are only a few other Diamonds for Los Alamos to compete against in New Mexico. They include former level 7 and 8 JO gymnasts from Albuquerque. In this meet they saw an entire new field of competition. Diamond teams in Colorado consist of full teams of 6-10 girls who are former level 9 and level 10 JO gymnasts. It was fun to watch as gymnast, after gymnast, did triple giant swings into double back flip flyaway dismounts on bars. On floor there were lots of double back tuck flips and double twisting layout flips. There were aerials and back handsprings into back flips on the beam, with double flipping and twisting dismounts. Vaults included lots of tsukaharas and yerchenkos (flipping and twisting while flipping).  It was fun and exciting. It gave the Los Alamos team a good idea of what it will be up against at regionals and was a great experience.

Brianna Fryer was Los Alamos’ high finisher in the Diamond competition. Fryer finished 11th with 34.80. She took the bronze medal on floor with a 9.50, and finished fifth on vault. Chantel Bibeault’s highest finish was sixth on floor with 9.35. Hannah Gram was 10th on floor with a 9.10. Kayli Lincoln also scored a 9.10 on floor to tie Hannah, but received the lower place because she had a lower all around. Colorado has the fourth highest enrollment in the Xcel program nationally, their Xcel program has surpassed their JO program in numbers. The Xcel program is only five years old and growing exponentially. 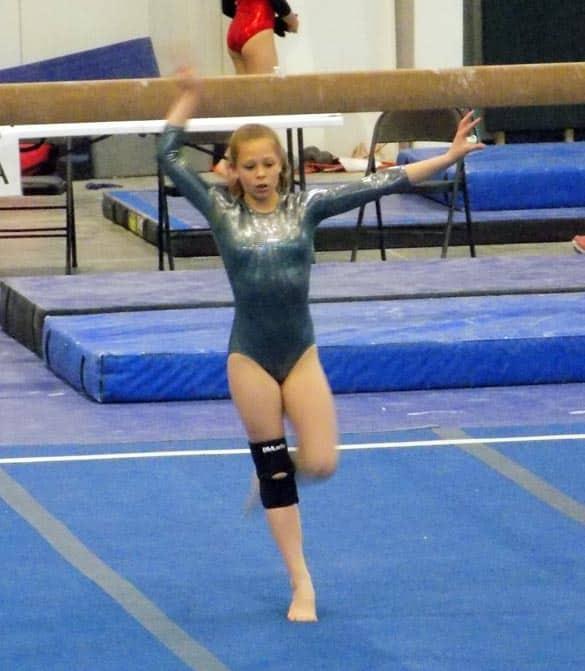 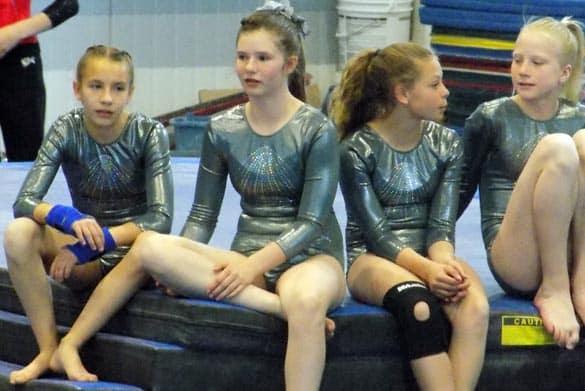 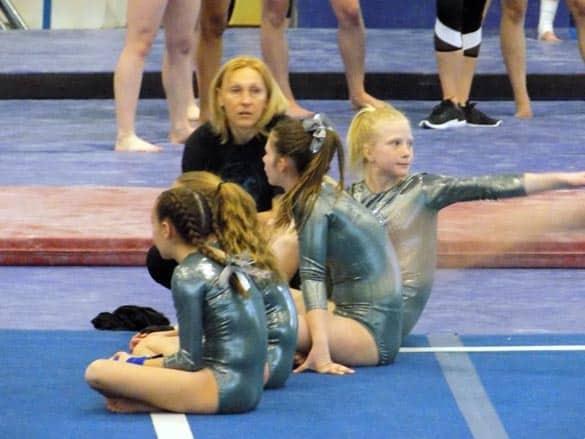 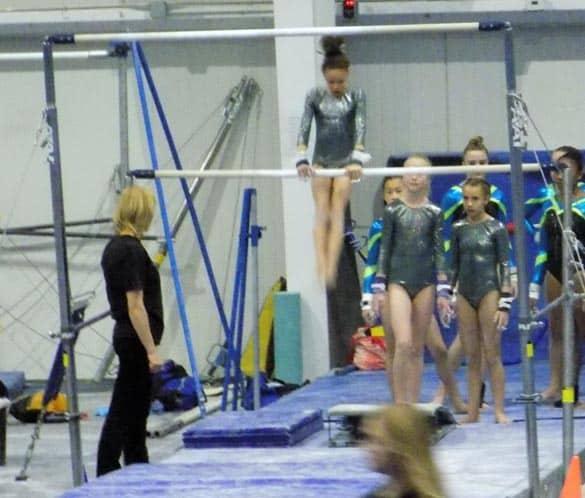 Los Alamos gymnasts warm up on the bars. Courtesy photo