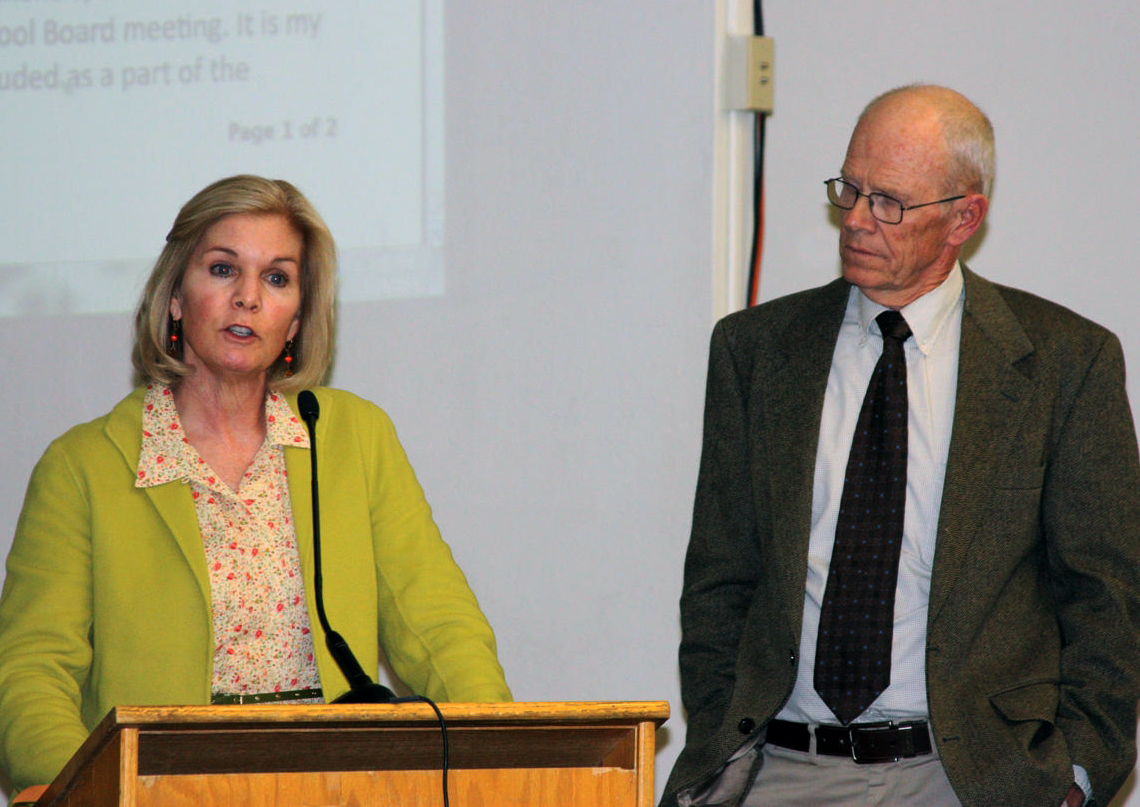 At the Jan.14 School Board Meeting, Board President Jim Hall and Vice President Judy Bjarke-McKenzie reported on a Dec. 20 meeting between Los Alamos School District officials and New Mexico Secretary of Education Hanna Skandera and her staff, and the responses the district has received from the Public Education Department (PED) following that meeting.

Superintendent Gene Schmidt, School Board President Jim Hall, Board Vice President Judy Bjarke-McKenzie and LAPS Director of Curriculum and Instruction Pamela Miller attended the meeting, which was held to discuss a letter sent to Skandera by the School Board outlining the District’s concerns about PED’s teacher evaluation process and the end-of-course exams used by PED to evaluate studen progress. One half of a teacher’s score is based on these test results. The letter was drafted by the Study Group for Teacher Concerns, a group of more than 40 teachers, with input from principals and District staff. The District’s teachers were polled on their support for the letter and 96.6 percent of the 66 percent of teachers who responded expressed support for its contents.

The meeting was cordial and he feels the District was listened to, Hall said. “We hit them at the right time and our theme of people work not paperwork resonated with them,” he said.

PED has been under pressure from a number of school districts to allow modifications to the teacher evaluation system.

“There is more flexibility than we had thought,” Hall said.

PED staff admitted that the roll-out of the new evaluation system has been bumpy, he said. Accomplishments from the dialogue include allowing Los Alamos to provide teachers with an option of two rather than three evaluations if they choose. With the first option, the teacher would be evaluated by two different evaluator, rather than one as with the second option. PED clarified that lesson plan presentation will be up to the District and that portions of the software reporting system Teachscape are optional.

Skandera asked the Los Alamos school officials to gather a year’s worth of data, using the PED’s teacher evaluation methods and return to PED with its requests and suggestions for changes. “We have an open door to develop a set of recommendations,” Hall said. “The process is still very much in flux. This could be a great opportunity of us.”

Board member Matt Williams said he thought the meeting had been valuable mainly for clarification of where the District has flexibility, rather than that PED had agreed to any substantive changes in their policy.

“PED did not capitulate a heck of a lot,” Hall agreed.

Director of Curriculum and Instruction Pamela Miller has been invited to join the statewide committee studying content for end of course exams, giving the district input on their content. Also, the district was invited to report back to PED with its suggests on the exam’s content.

Los Alamos High School World History Teacher John Pyle expressed frustration with the exam he must give in his class. Some of the questions are on the New Mexico Constitution, which he does not even teach, Pyle said.

Even though PED has said they will be open to reducing the weighting of  end-of-course test scores from 35 percent to 50 percent in teacher evaluations, being evaluated on subject matter he does not teach is still unfair, Pyle said.

Los Alamos American Federation of Teachers President Ellen Mills expressed concern about the “value added model” used to score student improvement based on standardized tests. The model is “a large piece of this evaluation process we are in the dark about,” Mills said.

Schmidt said that although he is optimistic about working with PED, he understands why teachers may have an attitude of “I’ll believe it when I see it.” They feel they have not been listened to, he said.