LAPS Custodians To Retain Jobs Despite Outside Contract 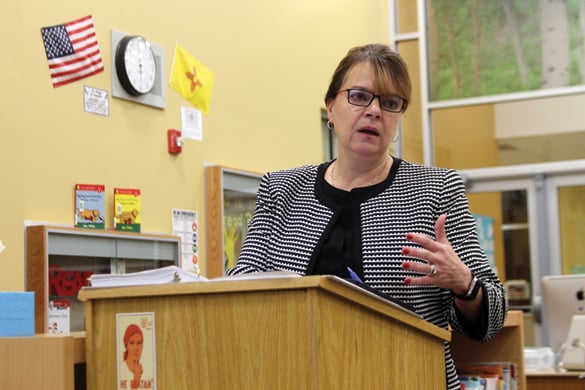 A contract for a Tennessee-based company to provide night-time custodial services for Los Alamos High School and Los Alamos Middle School will not result in the loss of jobs for Los Alamos Public Schools employees, according to Assistant Superintendent Lisa Montoya.

Montoya said she has met with custodial staff three times since the decision was made to find a contactor but there still seems to be concern about possible job loss.

“The Board would never allow jobs to be lost,” she said.

The Board voted unanimously Nov. 11 to approve the contract.

Montoya said because of the need for a quick turnaround, no request for proposal (RFP) was issued. She said the District found a company through TIPS, an interlocal purchasing system similar to the Cooperative Educational Service (CES), which also is used by the State. That company, SSC Services for Education, headquartered in Knoxville, Tenn., is a sister company to Chartwell, which provides food services for Los Alamos Public Schools.

SSC proposed providing 10 night-time custodians, cleaning supplies and cleaning equipment at a cost of $447,000, which Montoya said is $65,000 less than the District spent for 10 custodians.

Montoya said when she was appointed assistant superintendent for finance and operations in July, she went to all managers who were to be under her supervision to discuss what was good and where improvements could be made in their departments. At that point the District was experiencing problems hiring custodial staff and was short six to eight custodians.

Despite advertising in local and out of town newspapers, Montoya said only one application was received. At that point she said she consulted with Fernando Trujillo who holds a contract for cleaning services at the University of New Mexico-Los Alamos to find out how having an outside contractor clean a facility works. Montoya said that information from those discussions was regretfully shared and misinformation quickly spread.

Meanwhile, some existing custodial staff claim that when they approached their immediate supervisors, the idea of an outside contract was dismissed as rumor. They also feel that some of their questions have not been adequately addressed by the District and express concern that if a contractor can provide custodial services cheaper on the night shift, the contractor also may be able to provide services that cost less on the day shift.

Montoya said all LAPS custodial staff will continue to work for the District but some may be moved to the day shift at school sites where they are assigned or to a special team, which is being established to handle cleaning after events and more.