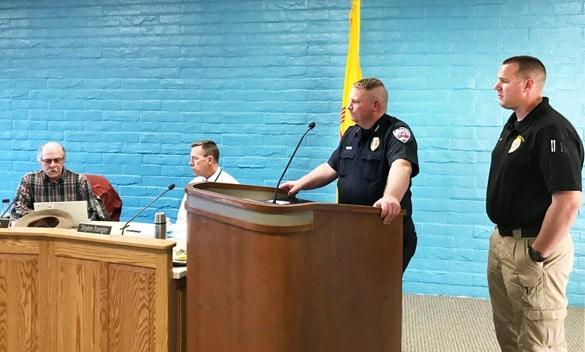 Ross, who is head of LAPD’s Community Liaison team, and Police Chief Dino Sgambellone addressed the board under an agenda item, “School Safety and Security Options”.

Chief Sgambellone said since the unfortunate events in Parkland, Fla., he has received a number of emails and phone calls from citizens, parents and students.

“What we have here is an opportunity not only to hear the ideas the police have but we have an opportunity to hear from the rest of the community and the student body on what their concerns are and what their expectations are moving forward,” he said. “As you look at safety and security from a broad perspective, there’s a lot of work to be done, not just here but in any district. And I just don’t want there to be a sense that it’s so overwhelming, that where would we even begin. We’ve already made great progress in many areas. I’d just like to continue the discussion and continue building on what we’ve got to date.”

Sgt. Ross began his presentation by saying the topic of safety and security has become more focused in the community in the last month or so but that from a police perspective, these are concerns, ideas and things LAPD has had for a while.

“The last time we had a child die in a school fire was in 1958, almost 60 years ago, at Our Lady of the Angels Catholic School in Chicago. Ninety two students and three nuns were killed in that fire. Basically, what I’ve read is that the school ignored a lot of the practices at that time for fire safety. After that fire, 16,500 school districts in the nation changed how they implemented fire codes within the schools. That’s almost 70 percent within one year,” Ross said. “Next year is going to be the 20-year anniversary of Columbine. One catastrophic fire and now we’ve gone 60 years without a child being killed at school by a fire.”

“They made a lot of changes that have been shown to be effective. We need to do the same thing as a community, as a nation, as a school district,” he continued.

In 15 years from 2000 to 2015, there have been 45 active shooter incidents within schools. Ross said the casualty number is what he looks at.

“I recommend we start to take this stuff very seriously because we can see it’s not slowing down. This calendar year alone, we’ve already had 23 kids killed on our campuses so that’s something we have to address. Any of these recommendations we put out there are not going to ever end these things. There always will be a threat but if we start looking at things in a layered approach, we can hopefully minimize our potential threat of being a victim,” Ross said.

Ross told the board that having a perimeter fence around schools is a requirement of the New Mexico Administrative Code. He said schools must be fenced not just for people but also for wildlife. He said when Poms and Associates, a risk management company used by the state Public Education Department, visited Chamisa Elementary School in December, it was their number one recommendation that the school grounds be fenced.

“This is the one argument I hear about fences. It’s going to feel like a prison. Our school is going to feel like a prison. In our community we already have fences at our homes, at our parks, at the pools we go to, Sullivan Field, the airport and all over the Lab. At any one of those locations, I don’t think anyone thinks they are in prison,” he said.

He went on to say that kids don’t even recognize there are fences at parks and pools, that they just have a great time.

Ross showed photos of the fencing at Sullivan Field saying some people may be surprised at the type of fencing around the facility for access control and to make sure people paid to get in to games. He also showed photos of a fence around a local pool and said he guarantees kids just have a good time there and don’t even think about the fencing. He said people don’t even realize Sullivan Field has a six-foot chain link fence with barbed wire on the top of it that goes three-quarters of the way around it.

Ross also showed an example of a fence that funneled people into the main access at a school, which enabled the school to know who was on or off campus and created access control.

“If we do perimeter security correctly, we create access control. We funnel everyone into one entrance so we know when parents are coming in, when visitors are coming in, when the maintenance crew is here. We need to have accountability, who’s in our schools, why they’re there and where they’re going. In the current set-up we have around our schools we don’t have that ability,” he said.

Ross also addressed key card access for access control, which he said would be one of LAPD’s last recommendations. He said the current system of using keys to lock doors is a hard thing to do. He said in a stressful situation when one loses their fine motor skills, keys are difficult to use.

In conclusion, Ross asked the board if they remembered what it was like before Sept. 11, 2001.

“What was it like going to the airport? You used to be able to walk your family right up to the gate, rarely going through a security screening. After that one incident, now look what we’ve done 17 years later. There’s not a single person here who would get on a plane if there was someone who hadn’t been checked in through security protocols,” he said.

“But if we go back to that, maybe Parkland, Florida is the schools’ Sept. 11. We haven’t had an incident yet in 20 years that’s made us do enough of these changes as a district and as a school. Let’s make Parkland be that incident. What we have to do is what’s right for our students. We’ve got to create that onion effect. We want to have a solid core. The more layers of security we have out there the stronger our core is going to be,” Ross said. “The less layers that we have the weaker the core is going to be.”

He said LAPD has already started working with the schools’ staff and some of the students training them on active shooter response.

“So we’re strengthening that core, strengthening those outer layers. That’s our recommendation to the school board. And I understand budget constraints – it’s just a priority. We’re getting ready for construction season for the schools, which is summertime. We can make this happen. This summer we can make it happen as long as we make it a priority,” Ross concluded.

Following the presentation, Sgambellone and Ross fielded questions from the board and members of the public. Board members applauded LAPD for their work to date on improving safety and security in the schools and for providing an additional resource officer for the elementary level.

Superintendent Dr. Kurt Steinhaus said Wednesday that the budget proposal for the 2018-2019 school year will include a line item for improving school safety, staff training and mental health. He said it will include the three items proposed Tuesday by LAPD.

“We are very appreciative of our partnership with the Los Alamos Police Department. They continue to provide outstanding training for our staff,” Steinhaus said.