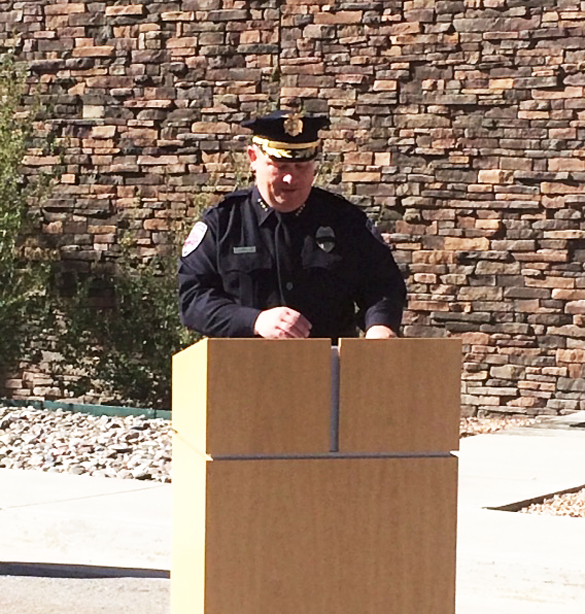 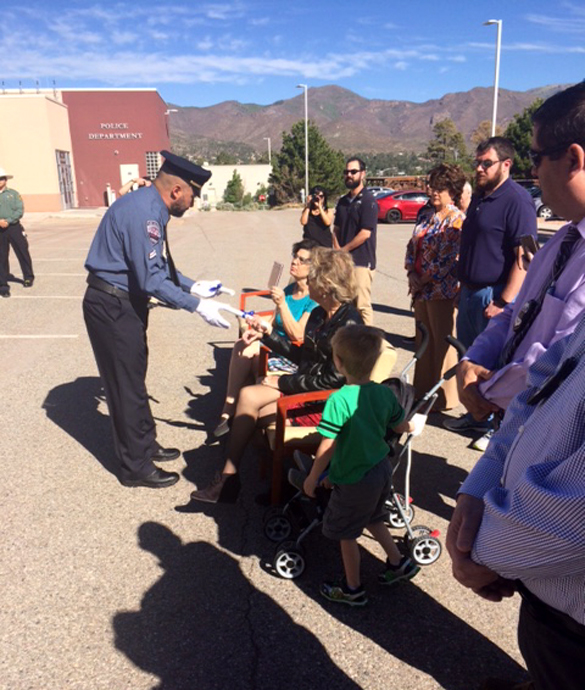 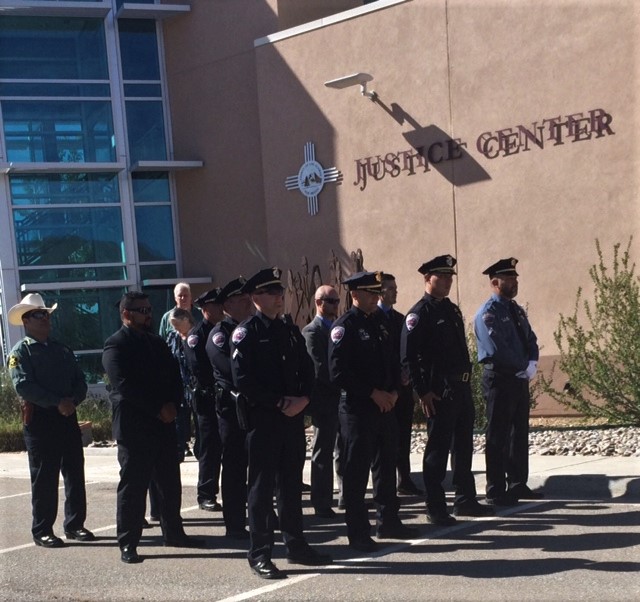 Los Alamos Police Chief Dino Sgambellone opened this morning’s Memorial Ceremony for Fallen Officers with a tribute to his assistant Connie Salazar who passed away in 2016 following a courageous battle with cancer.

“Although she wasn’t an officer, we lost one of our own in Connie Salazar. For those of you who knew Connie, you know what a wonderful, dedicated person she was. Her loss was not only a loss for LAPD but for the community of Los Alamos,” Sgambellone said.

Sgambellone called Salazar “truly one of a kind” and part of the LAPD family. He said she will always be missed and that the Department is thankful for all the wonderful memories shared with her.

“Connie was a special person and we continue to miss her,” he said.

Sgambellone went on to read a tribute to former LAPD Chief Gary W. Bequette, who passed away July 22, 2016. Bequette retired from LAPD as acting chief after 22 years. His daughters, Laura Hughes and Diana Bequette were present for the ceremony which included the unveiling of their father’s name on the LAPD memorial. Cpl. Pete Garcia presented them with scrolls with the imprint of the name plate.

Sgambellone said law enforcement fatalities climbed to their highest level in five years in 2016 with the loss of 135 officers, the highest number since 2011. He said firearms-related incidents were the number one cause of death in 2016, with 64 officers shot and killed throughout the United States compared with 41 officers in 2015. He said 28 officers died in automobile accidents, 15 officers were struck and killed while outside their vehicles and 10 were killed in motorcycle crashes.

Three officers were killed in the line of duty in New Mexico in 2016 and a final roll call was conducted for them at the event.

Hatch Police Officer Jose Chavez, 33, was shot and killed Aug. 12, 2016 while conducting a traffic stop. He had served with the eight-officer Hatch Police Department for two years and is survived by his wife and two children.

Alamogordo Police Officer Clint, 33, was shot and killed Sept. 2, 2016 during a foot pursuit following a traffic stop of a wanted felon. Despite being injured, he managed to return fire and killed the subject. Corvinus had served with the Department for four and a half years and is survived by his daughter and parents.

Valencia County Deputy Sheriff Ryan Thomas, 30, was killed in a single-vehicle crash while responding to a call for service when his patrol car left the road and overturned. He was a veteran of the U.S. Navy and the Colorado National Guard, and was with the Valencia County Sheriff’s Office for a year, having previously served with the Alamogordo Police Department for two years. He is survived by his wife and children.

Sgambellone said that given the adversity that faces law enforcement, it is surprising that people are still willing to wear the uniform and badge.

“I thank their families because I can tell you from personal experience that it’s not easy on the families,” he said.

He recalled the recent shooting death of Police Chief Stephen Disario of Kirkersville, Ohio, a town of only 1,000 residents.

“I bring that up because it can happen anywhere. We live in a great community, a very safe community and I hope it continues that way. Understand that when these officers go through their training, it’s all designed to keep them safe. Again, it can happen anywhere. That particular police chief had six children and another on the way,” Sgambellone said.

“So, thanks again to the families, and thank you for your support,” he said. “We enjoy great support throughout the County.” 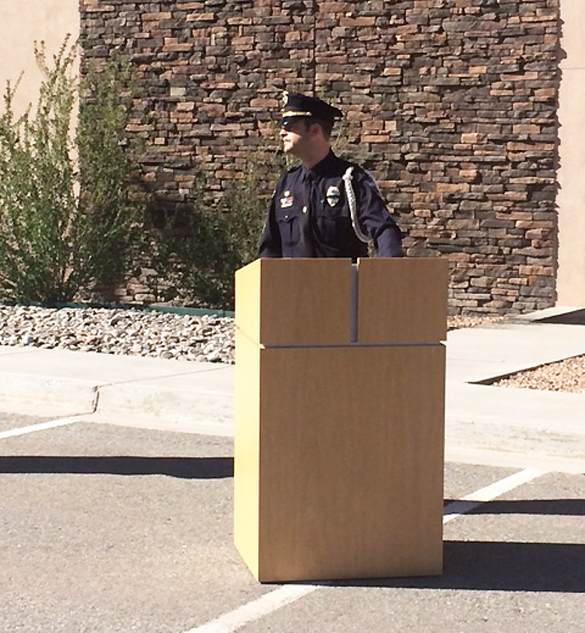 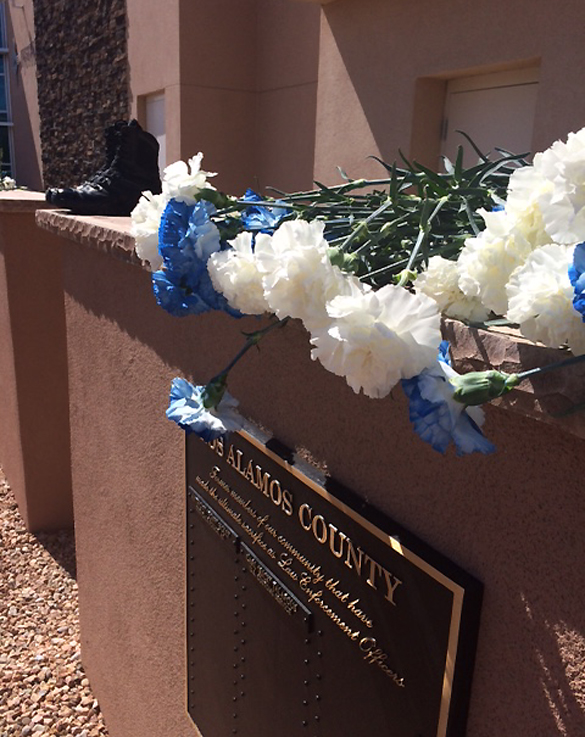 Carnations placed this morning on the memorials by LAPD officers and staff, County Councilors and members of the public. Photo by Maire O’Neill/ladailypost.com 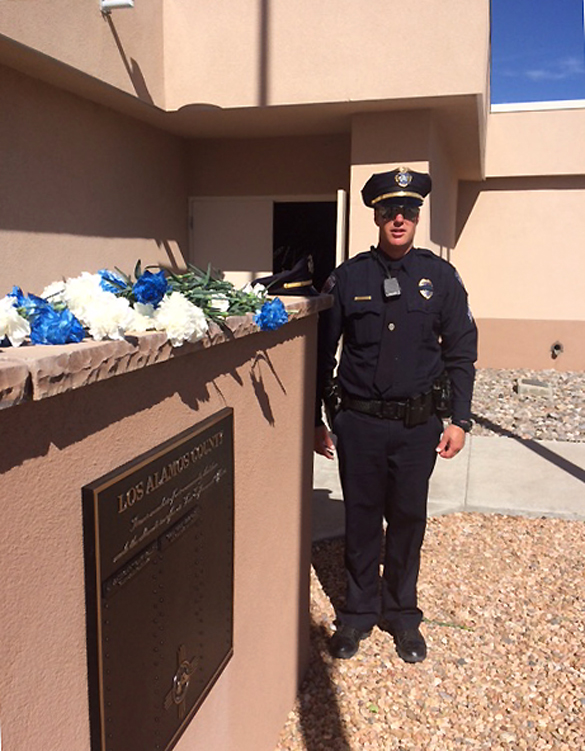 Sgt. Chris Ross stands next to the memorials to fallen officers this morning outside the Los Alamos Justice Center. Photo by Maire O’Neill/ladailypost.com 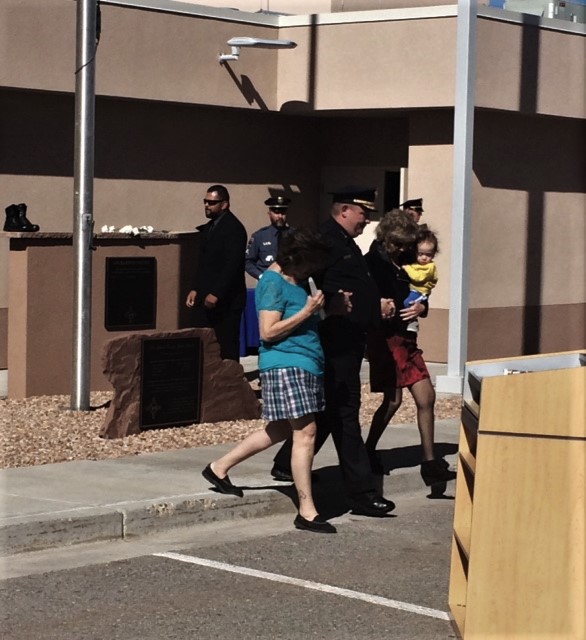 Police Chief Dino Sgambellone escorts Linda Bequette, left, and Laura Hughes, to their seats after they place carnations on the memorial to fallen officers. Photo By Maire O’Neill/ladailypost.com 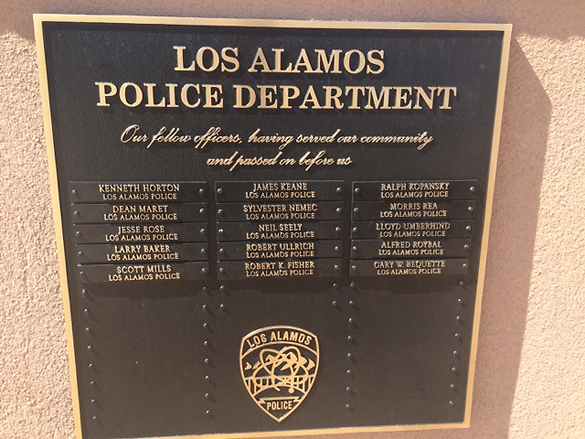 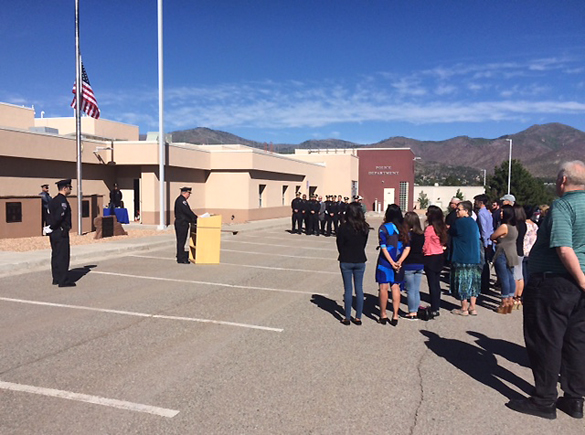 A large crowd attends a somber memorial ceremony for fallen officers this morning at the Los Alamos Justice Center. Photo by Maire O’Neill/ladailypost.com 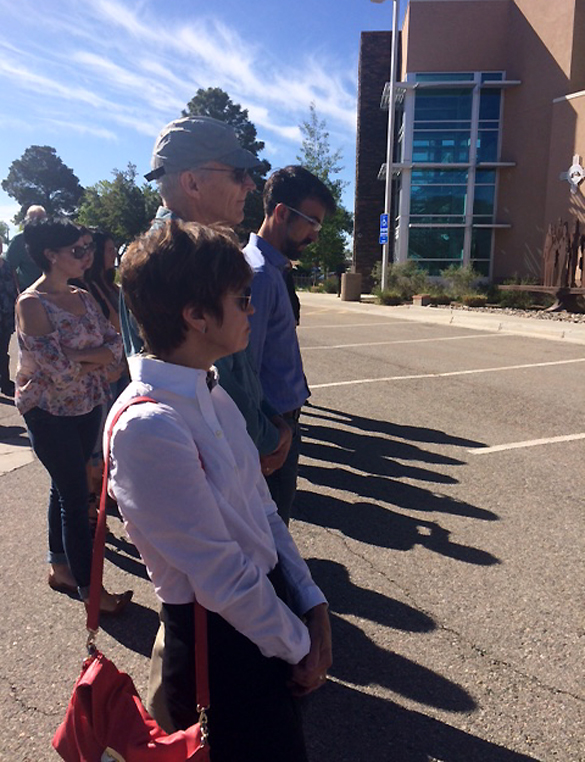 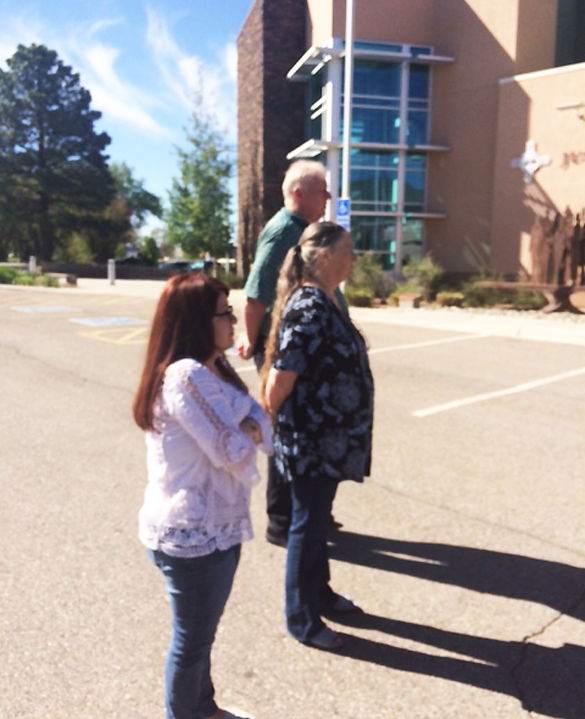 Municipal Court Judge Alan Kirk, Magistrate Court Judge Pat Casados, center, and Magistrate Court Manager Crystal Sanchez at this morning’s Memorial Ceremony. Photo by Maire O’Neill/ladailypost.com
President Donald J. Trump Issues Proclamation:
Peace Officers Memorial Day and Police Week, 2017
During Peace Officers Memorial Day and Police Week, we honor the men and women of law enforcement who have been killed or disabled in the course of serving our communities.  Police officers are the thin blue line whose sacrifices protect and serve us every day, and we pledge to support them as they risk their lives to safeguard ours.
Last year, 118 officers died in the line of duty, and of those, 66 were victims of malicious attacks.  These attacks increased by nearly 40 percent from 2015.  This must end.  That is why one of my first actions was to direct the Department of Justice to develop a strategy to better prevent and prosecute crimes of violence against our Federal, State, tribal, and local law enforcement officers.
In addition, my Administration will continue to further the efforts of the Department of Justice to improve the lives of law enforcement officers and their families.  This includes supporting the Officer Safety and Wellness Group, which improves officer safety on the job, and accelerating the processing of benefits through the Public Safety Officers’ Benefits Program, which provides vital resources to the families of fallen officers.
Our liberties depend on the rule of law, and that means supporting the incredible men and women of law enforcement.  By a joint resolution approved October 1, 1962, as amended (76 Stat. 676), and by Public Law 103-322, as amended (36 U.S.C. 136 and 137), the President has been authorized and requested to designate May 15 of each year as “Peace Officers Memorial Day” and the week in which it falls as “Police Week.”
NOW, THEREFORE, I, DONALD J. TRUMP, President of the United States of America, do hereby proclaim May 15, 2017, as Peace Officers Memorial Day and May 14 through May 20, 2017, as Police Week.  In humble appreciation of our hard-working law enforcement officers, Melania and I will light the White House in blue on May 15.  I call upon all Americans to observe Peace Officers Memorial Day and Police Week with appropriate ceremonies and activities.  I also call on the Governors of the States and Territories and officials of other areas subject to the jurisdiction of the United States, to direct that the flag be flown at half-staff on Peace Officers Memorial Day.  I further encourage all Americans to display the flag at half-staff from their homes and businesses on that day.
IN WITNESS WHEREOF, I have hereunto set my hand this fifteenth day of May, in the year of our Lord two thousand seventeen, and of the Independence of the United States of America the two hundred and forty-first.
Menu
Los Alamos
63°
Fair
7:21am6:17pm MDT
Feels like: 63°F
Wind: 3mph E
Humidity: 25%
Pressure: 30.08"Hg
UV index: 1
MonTueWed
70/46°F
52/34°F
54/36°F
Weather forecast Los Alamos, New Mexico ▸