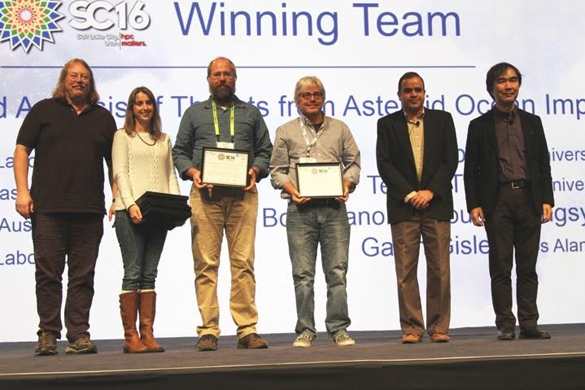 By ROGER SNODGRASS
Los Alamos Daily Post
For the second year in a row, a Los Alamos data visualization team won the Best Visualization and Data Analytics Showcase Award at Supercomputing 2016 in Salt Lake City last month.
The content of their 4-minute video illustrates varying degrees of threats from different types and sizes of asteroids landing in the ocean.
There’s a lot of traffic bustling about in the vicinity of Earth, not only the objects that orbit the planet, but also asteroids that orbit the Sun, which brings the objects into proximity with Earth.
NASA has identified and is now tracking 1,752 asteroids with a potential to make threatening approaches to earth, that is, to pass within 7,480,000 km (4,650,000 mi.) and are larger than 150 m. (500 ft.) in diameter. As new objects are discovered, the number of Potentially Hazardous Asteroids (PHAs) counted on NASA’s Near Earth Object Page has grown by 35 in the last four months.
Working part-time on an emerging security beat known as planetary defense, an unmanned spacecraft is now on its way to rendezvous with the asteroid Bennu. Mainly of interest because of asteroids’ left-over clues about the formation of the solar system and perhaps even the origin of life, the Osiris-Rex mission is also of interest to Earth’s astrophysicists because there is a very slim chance it might collide with Earth sometime in the next century.
Asteroid collisions are in general low probability events, but the consequences can be very large, as in the case of the event that created the Chicxulub crater on norther edge of the Yucatan Peninsula in Mexico. An asteroid or meteor 10 km (6 miles) across is believed to have struck there and caused the extinction of the dinosaurs 66 million years ago. Much closer to the present, a small meteor, thought to have been about 20 m. (66 ft.) damaged thousands of buildings and sent nearly 1,500 people to the hospital in Chelyabinsk, Russia in 2013.
It falls to NASA’s Office of Planetary Defense to figure out what to worry about and how much to worry. At a conference on Asteroid Threat Assessment this summer, scientists from Department of Energy high performance computing laboratories met with counterparts at NASA and NOAA to focus on a substantial piece of that problem.
Since 70 percent of Earth’s surface is water, asteroids are most likely to come down in the ocean but some fraction of asteroid collisions will generate tsunamis that can harm populations on shore and thus must be taken into account in constructing a risk assessment.
LANL’s high resolution visuals, designed for scientific peers and the general public, played a role in the discussions. They were based on simulations by a group of Los Alamos scientists led by astrophysicist Galen Gisler to weigh the potential for catastrophic damage of asteroids on the lower end of the scale. The question under deliberation was what is the cut-off size for asteroids that don’t need to be tracked?
John Patchett worked with the visualization team and was the lead author of a scientific paper, “Visualization and Analysis of Threats from Asteroid Ocean Impacts.” The paper asks the corollary question: “Is there a transition size above which one catalogs all the objects and below which NASA simply provides a warning?”
These are complicated questions that can’t be answered without a high performance supercomputer, running weeks to months to resolve complex hydrodynamic equations in hundreds of billions of computation cells, said Gisler, who has been working on asteroid impact issues for nearly 15 years.
“It takes a long time,” he added. “You come in and check on them once a week or so to make sure they’re running right.”
Patchett acknowledged the teamwork involved in the visualization. “We work with a team of experts – experts in large data management, supercomputing, visualization, rendering, art and science and of course physics – and the video is produced with the help of all these people,” he said.
While seemingly remote and abstract, the subject provides a challenging set of issues to test and demonstrate more widely applicable threat-reduction tools and high-performance computer skills. Problems involving the interaction of solids and liquids in motion are particularly hard to solve because there are so many different individual textures, factors, gradients and vectors that are constantly changing.
Menu
Los Alamos
57°
Sunny
7:16am6:23pm MDT
Feels like: 57°F
Wind: 0mph NNE
Humidity: 20%
Pressure: 30"Hg
UV index: 1
MonTueWed
73/48°F
73/48°F
73/48°F
Weather forecast Los Alamos, New Mexico ▸
Previous
Next