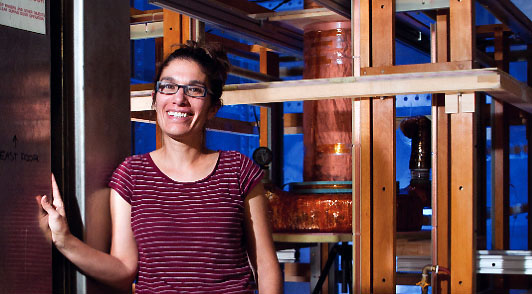 Michelle Espy, project leader at LANL, in front of the battlefield MRI, which uses ultra-low-field magnetic resonance imaging to create images of injured soft tissues, such as the brain. Courtesy/LANL

Los Alamos National Laboratory’s portable MRI was named one of the Top 10 Breakthroughs of the Year by Physics World, the member magazine of the Institute of Physics. Portable MRI, also called Battlefield MRI (bMRI), uses ultra-low-field magnetic resonance imaging to create images of injured soft tissues, such as the brain.

“Hospital-based MRI devices are big and expensive,” said Michelle Espy, the bMRI project leader. “And they require considerable infrastructure, like large quantities of liquid nitrogen and helium, and a lot of energy. bMRI doesn’t have those same requirements, making it a much lighter, less expensive and low-power alternative that can be deployed to hard-to-reach places like the battlefield and remote hospitals in poor countries.”

Currently, soldiers wounded in battle must be flown to a large hospital to undergo an MRI, and most people in emerging nations don’t have access to MRI at all.  “We’ve been in contact with doctors who routinely work in the Third World and report that MRI would be extremely valuable in treating pediatric encephalopathy, and other serious diseases in children,” said Espy.

Conventional MRI machines use very large magnetic fields that align the protons in water molecules to then create magnetic resonance signals, which are detected by the machine and turned into images. The large magnetic fields create exceptionally detailed images, but they are difficult and expensive to make.

Espy and her team wanted to see if images of sufficient quality could be made with ultra-low-magnetic fields, similar in strength to the Earth’s magnetic field. To achieve images at such low fields they use exquisitely sensitive detectors called Superconducting Quantum Interference Devices, or SQUIDs.

SQUIDs are among the most sensitive magnetic field detectors available, so interference with the signal is the primary stumbling block. “SQUIDs are so sensitive they’ll respond to a truck driving by outside or a radio signal 50 miles away,” said Al Urbaitis, a bMRI engineer. The team’s first generation bMRI had to be built in a large metal housing in order to shield it from interference.

By the end of the internally funded project the Los Alamos team was also working in the open environment without the large metal housing using a lightweight series of wire coils that surround the bMRI system to compensate the Earth’s magnetic field. In the future, the field compensation system will also function similar to noise-cancelling headphones to eradicate invading magnetic field signals on-the-fly.

“We’re very honored that Physics World has recognized bMRI as a Breakthrough of the Year,” said Per Magnelind, a scientist at Los Alamos who works on bMRI. “We’re hopeful that, with additional development through external follow-on funding, bMRI systems could become relatively easy and inexpensive to deploy.”