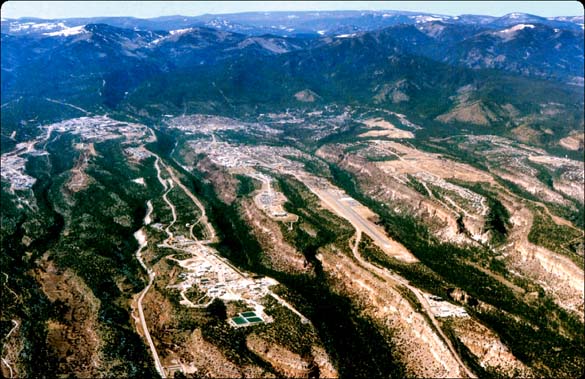 The Department of Energy and the National Nuclear Security Administration continue to move toward establishing a long-term manufacturing capability for producing plutonium pits, the nuclear triggers for thermonuclear weapons, at Los Alamos National Laboratory.

LANL has long played a crucial leadership role in investigating and handling plutonium materials and maintaining the nation’s nuclear weapons stockpile. A Los Alamos site report by the Defense Nuclear Facilities Safety Board, written for the week ending Dec. 18, 2018, noted a recent DOE approval of a four-part plan for meeting a congressional mandate for developing a national production capacity of 50 to 80 plutonium pits a year by 2030.

The plan commits to solving an increasingly urgent problem at the 72-year-old nuclear weapons laboratory, which is how finally to withdraw operations from the antiquated Chemistry and Metallurgy Research building which was built in 1952. The deadline for the move is currently 2019.If the cessation of activities continues to be delayed, LANL Director Charlie McMillan has said, “I am concerned that we will miss the target date to terminate program operations in CMR by 2019.” If CMR operations are terminated before they can be transferred, he added, “our ability to execute plutonium missions will be jeopardized.”

The new plan, which has been discussed in broad terms in Congressional testimony and in other public forums in recent years, is to move the CMR operations, primarily employed in analytical chemistry and materials characterization, into new quarters. Ideally the new location would share facilities or would at least be in proximity to the pit manufacturing activities.

When a laboratory spokesperson was asked for comments and input from a subject matter expert about plans for plutonium pit production, he said LANL’s instructions were to direct questions to NNSA headquarters, or refer questioners to three years of annual Stockpile Stewardship Management Plans.

The plan for fiscal 2016, 314 pages, specifies that parts of the Radiological Laboratory Utility Office Building (RLUOB),would be reconfigured and equipped to accommodate the capabilities currently centered in CMR. The plutonium-processing facilities at PF-4, adjacent to RLUOB, would be rearranged to make way for new equipment for the production and certification process. Additional production space would be provided as modular additions to PF-4, for the longer term purposes.

According to the DNFSB site report, however, a new subproject has recently been added to the former plan, which called for increasing the original radiological limit in RLUOB from 8.4 grams of plutonium-equivalent material to 38.6 grams. This fourth subproject calls for another increase, this one to 400 grams of plutonium-239-equivalent material. “Plutonium-239-equivalent” is a standardizing measure for expressing the degree of exposure by different kinds of radioactive materials. The over-all 100-fold increase in exposure was criticized last week by Concerned Citizens for Nuclear Safety and Nuclear Watch New Mexico and will certainly be challenged as the project unfolds.

LANL has been supporting the production of new pits, the implosion-device triggers for nuclear weapons, since the demise of the Rocky Flats plutonium processing facility near Denver in 1989. An article in the lab’s National Security Magazine, tells the story of how LANL developed its first “Qual-1” pit in 2003. “Qual-1” meant that it was the first pit good enough for quality control and testing. Several years later, in August 2011, the program delivered 29 plutonium pitsfully certified for use as replacements in the W88, a U.S. Navy weapon mounted on Trident II submarine-launched ballistic missiles

Congress bailed on LANL’s last full-scale, consolidated effort in 2011, known as the Chemistry and Metallurgy Research Replacement (CMRR-NF) nuclear facility. After the increasingly controversial project’sbudget ballooned from under a billion dollars to over six billion dollars, congressional appropriators, in the midst of a major recession and lacking confidence in the budget and schedule, deferred CMRR for five years. Soon, LANL and NNSA officials took a step back, consulted with stakeholders in the Defense Department and came up with what seemed to be a less expensive plan.

There are already numerous objections to the new pit-making initiative from opponents of nuclear weapons. There are questions about the need for pit production at a time when the numbers of nuclear warheads should be declining under the 2010 New Start Treaty with Russia and arguments over claims thatlife extension programs for nuclear weapons and modernizing improvements will actually reduce the nuclear stockpile.

According the Nuclear Non-proliferation Treaty (NPT), nuclear weapon States are obligated, under Article VI, to “pursue negotiations in good faith on effective measures relating to cessation of the nuclear arms race at an early date and to nuclear disarmament, and on a treaty on general and complete disarmament under strict and effective international control.”

The Department of Energy will also be asked to respond to an apparent legal restriction, thata production rate of only 20 plutonium pits per year is permissible under the current National Environmental Protection Act record of decision.

Meanwhile, the Plutonium Facility, where most of the work would take place has been shut down since June 2013, while building safety and work procedures were overhauled. Los Alamos officials haveacknowledged deficiencies in program management and hazardous operations to the extent the current management contract will expire, barring a special arrangement, in 2017.