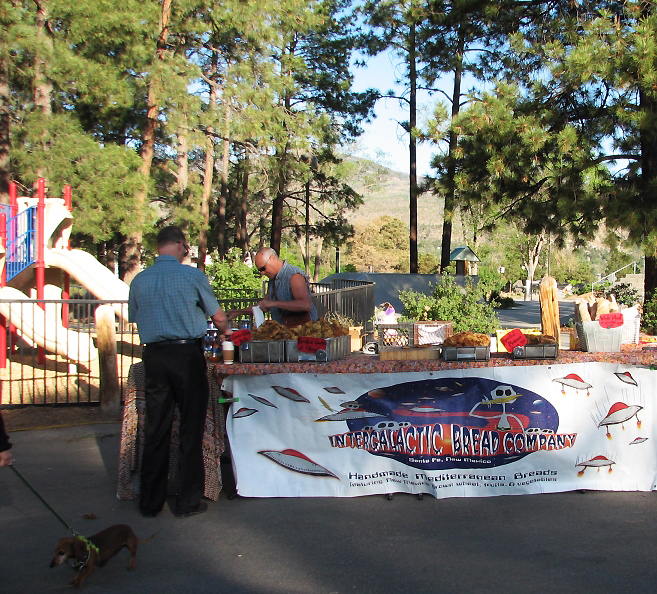 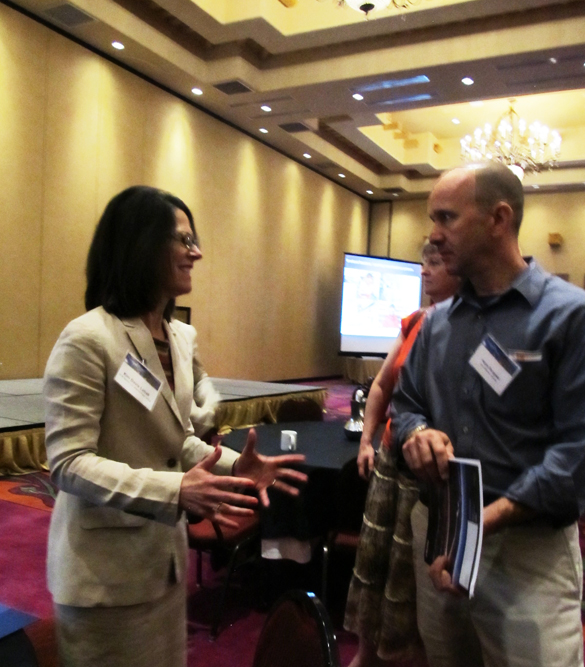 It was a time for looking ahead rather than back, for celebrating relative stability and appreciating positive indicators as evidence of better days ahead. 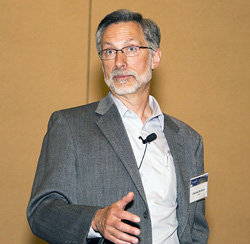 The Lab is a network of partnerships and mutual support, LANL Director Charlie McMillan said in his opening remarks, setting the theme for the morning. As he had mentioned at the last update, McMillan said, a major shift is occurring in the laboratory workforce.

“We expect about one-third of our workforce to either retire or leave for other reasons,” he said. “When I look at the expected attrition from the Lab, it’s really across all segments, from scientists and engineers to the craftsmen and everybody in between. There are going to be opportunities over this time period across the whole spectrum of the laboratory’s work.”

Considering the large percentage of the workforce that traditionally comes from Northern New Mexico, he said, that means an unusual opportunity for students at all levels in the state. “The next five years are going to shape the work force of the Laboratory for the next 30 years,” he added.

For the last several years, as part of a community commitment plan, required under its contract with the Department of Energy, the partnership that manages LANL, Los Alamos National Security, LLC, has been making direct investments in workforce development, including a pipeline jobs program for computer scientists. This has included investments in New Mexico Highlands University in the Computer Science Department and other science and technical training programs at UNM-LA, Northern New Mexico College and Santa Fe Community College.

McMillan said a thousand students have taken computer courses so far and 170 have graduated with a bachelor’s degree or master’s degree in computer science.

“If you read the news as I do, there are a lot of opportunities in computer science and computer security,” he said. “We’re going to have to functionally think about computer security in a different way, and what better time than when students are in school and working with an organization like the Laboratory where — no surprise — computer security is a big, big deal.”

Other Lab partnerships include college scholarships, math and science academy training, an academic consortium, technology assistance to businesses, food drives and funds from lab employees  to United Way with matching funds from LANS.

McMillan introduced two of his most immediate partners, Kim Davis Lebak, the National Nuclear Security Administration Field Office manager, and Christine Gelles who is the manager of the Department of Energy’s Environmental Management Field Office. They in turn talked about their partnerships with the other parts of their federal organization and other governmental entities.

Lebak described the community commitment partnerships required in the contract her office supervises, and said, the Lab “is hitting it out of the park, well above what’s required from a NNSA perspective.”

She also had some good news for the local construction industry. “NNSA is expensing more capital dollars at the Los Alamos site than any of our other NNSA sites, investing in nuclear waste facilities to replace facilities that in some cases are older than I am, plus we’re doing some equipment upgrades,” she said. “So the construction portfolio right now is very good for LA and will continue over the next few years.”

Her take on the federal budget process was that LANL would be getting about $1.9 billion in the next fiscal year from DOE and NNSA, which meant the total considering funds from other federal sources, was likely to be more than $2 billion. “I think that’s a very good report to bring you,” she said.

Her partner Gelles reported on the status of an administrative transition that will be carving out the environmental management function that is now under the Lab’s contract. Work remains to be done on the first phase, which is to establish a stand-alone contract for the work with LANS before developing a competitive process for a new contract or contracts “maybe two years from now.”

The transition was brought on by a number of management problems last year, including the lab’s responsibility for a serious radiological incident that shut down the Waste Isolation Pilot Plant repository in Southern New Mexico.

When the environmental function has been extricated from the current contract, the Lab will lose that funding, which has run about $200 million yearly and a little more in recent years, Gelles said.  The administration requested $186.6 million for 2016.

“We’ll probably go down about 250 people,” McMillan said. “That money is in the Lab right now.” Other than that, the situation is relatively stable, he said during the question and answer period at the end of the update.