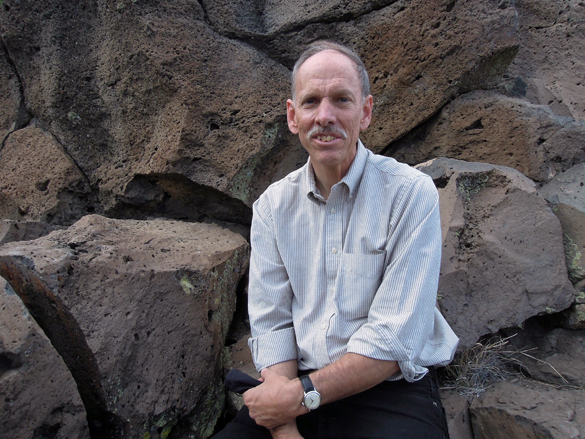 TenCate, who leads the Modeling and Simulation Team in the Geophysics Group in the Earth and Environmental Sciences Division (EES), was honored for his contributions to nonlinear acoustics of earth materials.

“Jim’s research over the years has been critical to our understanding of nonlinear acoustics, which affects many applications, including more efficient energy production, earthquake prediction and nuclear threat detection,” EES Division Leader Jim Bossert said. “We are thrilled to see Jim receive this recognition from the acoustics community for his efforts.”

TenCate’s research focuses on nonlinear acoustics and elasticity, seismology and nonlinear imaging. “Nonlinear” indicates that the change in one factor (such as stress) is not proportional to the change in another (such as strain); therefore such change is less predictable. Nonlinear acoustics can be applied to the formation of shock waves, harmonic distortion and even paths to chaos. TenCate performs nonlinear elastic wave experiments that reveal the peculiar behavior of rocks and geomaterials. His work supports nonproliferation, more efficient fossil energy production, geophysics, nondestructive testing, general linear and nonlinear acoustic diagnostics and the Los Alamos Seismic Network. A specialized experimentalist, TenCate also works with elastic waves.

TenCate began his career modeling wave propagation of sonic booms and then transitioned to using underwater acoustics (including large sound waves) for detecting submarines. He joined Los Alamos in 1994 to work on the geophysics of oil and gas reservoirs. Now he works with acoustic signatures as well as using nonlinear acoustic imaging for both non-destructive testing and evaluation and imaging for oil and gas research.

TenCate holds a doctorate and master’s degree in mechanical engineering with a specialization in physical acoustics.

About the Acoustical Society of America

The ASA named nine fellows this week, elected by the association’s executive council at its spring meeting in Salt Lake City. International members of this association, which was founded in 1929, work in a variety of fields related to sound, including Earth and life sciences, engineering and the arts. Learn more about the ASA Fellowships (http://acousticalsociety.org/content/new-fellows-2016).