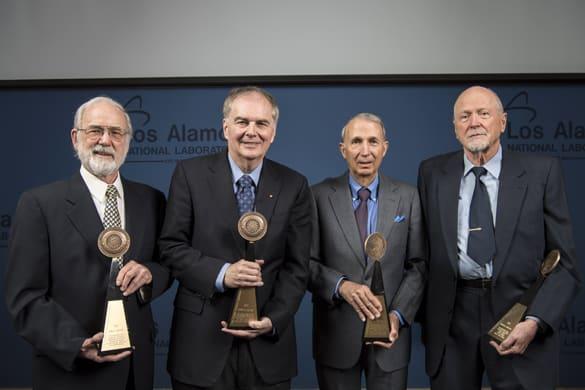 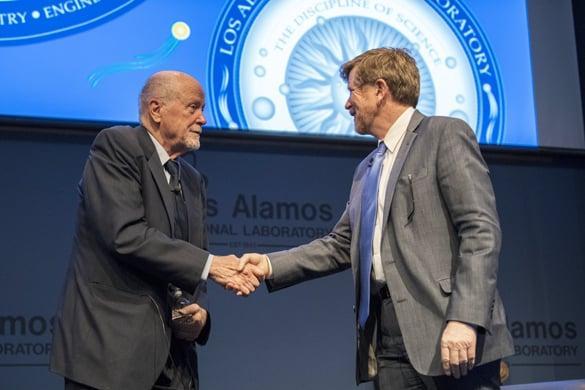 Four Los Alamos National Laboratory scientists were honored at the Los Alamos Medal ceremony Thursday, April 12, for their distinguished achievements that have impacted the success of the Laboratory, and consequently the nation, either through mission accomplishments or enhancing the Laboratory’s distinction.

The Los Alamos Medal is the Laboratory’s highest distinction.

“There have been only 13 awardees since the Medal was established 17 years ago,” LANL Director Terry C. Wallace, Jr. said. “And today’s medal winners are the first since 2014.”

Past medal winners include Hans Bethe and Harold Agnew.

This year, the Medals were awarded to Howard Menlove, who helped establish the Laboratory’s technical expertise in nuclear safeguards and nonproliferation that became the foundation for international nonproliferation programs; and three members of the Human Genome Project team at Los Alamos—Scott Cram, Larry Deaven, and Robert Moyzis—who were instrumental in motivating the Department of Energy to formally initiate the Human Genome Project in 1987.

“Today’s awardees … all exemplify the full breadth of the Laboratory’s contribution to the nation, from basic research to applied missions,” Wallace said, “and it’s a privilege to be here today to honor them.”

Menlove began his career at the Laboratory in 1967, when work to develop technical expertise regarding nuclear safeguards and nonproliferation was just beginning. Menlove would become “the single greatest worldwide contributor to the field of safeguards measurements in the last 50 years,” said Nancy Jo Nicholas, principal associate director for Global Security at the Laboratory.

Menlove developed neutron nondestructive assay methods that are still used around the world today by International Atomic Energy Agency (IAEA) inspectors, nuclear facility operators, and nuclear regulators. He also continues to serve as a premier scientific leader and technical advisor and is often called upon by the U.S. government.

“In particular, Howard has provided technical advice for decades on the seemingly intractable proliferation challenge represented by North Korea,” Nicholas said. “When the IAEA was conducting inspections in [North Korea], Howard personally led the charge to identify and develop verification strategies and instruments to apply safeguards to North Korea’s nuclear program.”

Cram, Deaven and Moyzis were honored for their collective efforts to establish the Human Genome Project, which resulted in the complete sequencing of all 3 billion DNA base pairs and locating each human gene.

“Not only did the Human Genome Project accelerate biomedical science and the understanding of human disease,” said Babs Marrone, a senior scientist and project leader in the Bioscience division of the Laboratory, “it fundamentally transformed the way that science is conducted today as multidisciplinary, collaborative efforts with open information sharing that integrates experiment, computation and analytics of big data.”

Cram developed the technology for analyzing and sorting human chromosomes and founded the National Flow Cytometry and Sorting Research Resource funded by the National Institutes of Health for more than 30 years.

Deaven developed the technology to make “libraries” or collections of DNA fragments from specific human flow-sorted chromosomes and was the Los Alamos leader in the joint Los Alamos/Livermore DOE National Laboratory Gene Library Project that distributed these libraries to researchers worldwide studying the genetic basis of disease.

Moyzis, an expert in genome organization and function, was the first director of the Los Alamos Center for Human Genome Studies and led the discovery of the unusual DNA sequence–the telomere­–that caps the ends of all human chromosomes, a discovery that was foundational to the fuller understanding of genomics.

In all, the four awardees tangibly demonstrate “what the Laboratory values: our people and the extraordinary talents they bring to accomplish our mission,” Wallace said. 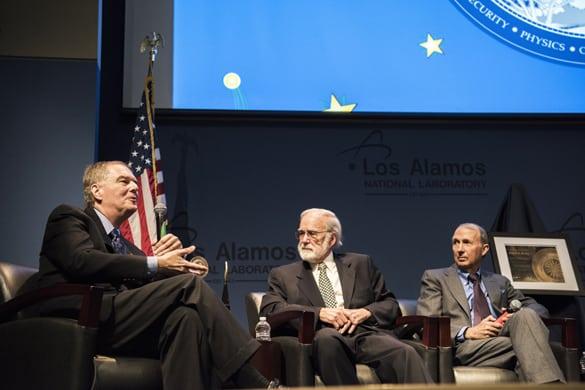