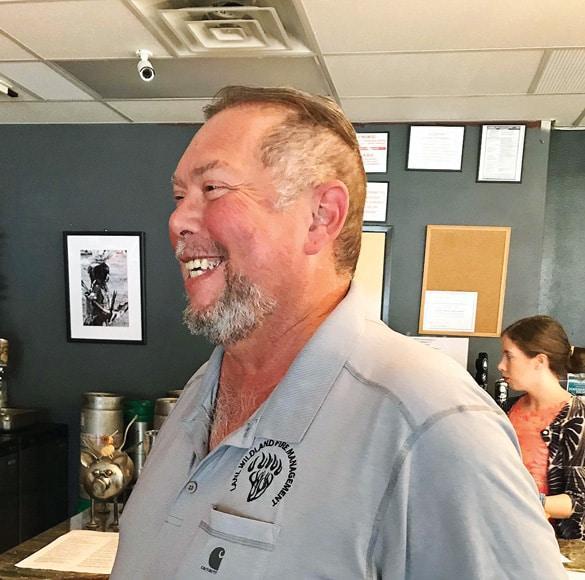 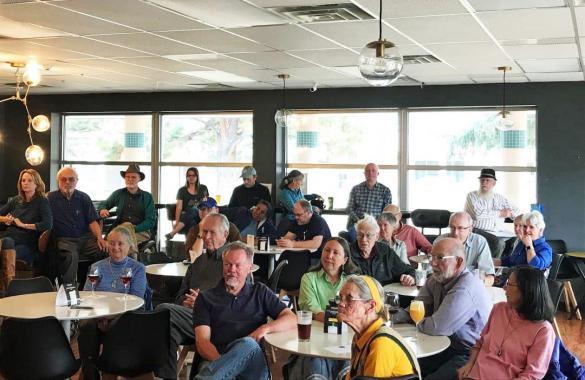 “I don’t think I’m going to surprise anybody when I tell you what the current conditions are,” Los Alamos National Laboratory Wildland Fire Manager Manny L’Esperance said Monday evening at a Science on Tap event at UnQuarked in Central Park Square.

“We’re in the midst of a drought that appears to be getting worse and I don’t know what you folks think about climate change but this drought, every year we hear it’s getting worse. We are seeing fire behavior that we have never seen before and this year’s no different,” he said.

L’Esperance has had more than 200 deployments as an incident commander and involved in more than 1,000 emergency response actions over 34 years. He is responsible for the development, management and implementation of the LANL Fire Program.

L’Esperance said starting out early, it looks like fuel moistures are down in the 60s whereas normally at this time of the year they should be around 120.

“Our heavy fuels that we use as an indicator of really what the potential is, they’re in the single digits. When they burn down on the controlled burns that we’ve had this year, they’re burning down to fine white ash which is pretty much unheard of,” he said.

L’Esperance said the smoke seen in Los Alamos is coming from two fires near Grants, one is an escaped prescription fire in the Bluewater area. He mentioned a large fire burning in Oklahoma, which has already caused the death of a heavy equipment operator and burned some 400,000 acres and said the fire is severe and continuing to get worse.

“We’ve done a lot of good work on the Laboratory in cooperation with some of our land management agencies. We did some thinning work after the Cerro Grande Fire and after the Las Conchas Fire, but we’ve got to understand that the fuel situation is not static, it’s dynamic so what we’re looking at is we’ve renewed some of the overstory, thinned some of those heavy fuels in the area but we haven’t eliminated the fire danger,” he said. 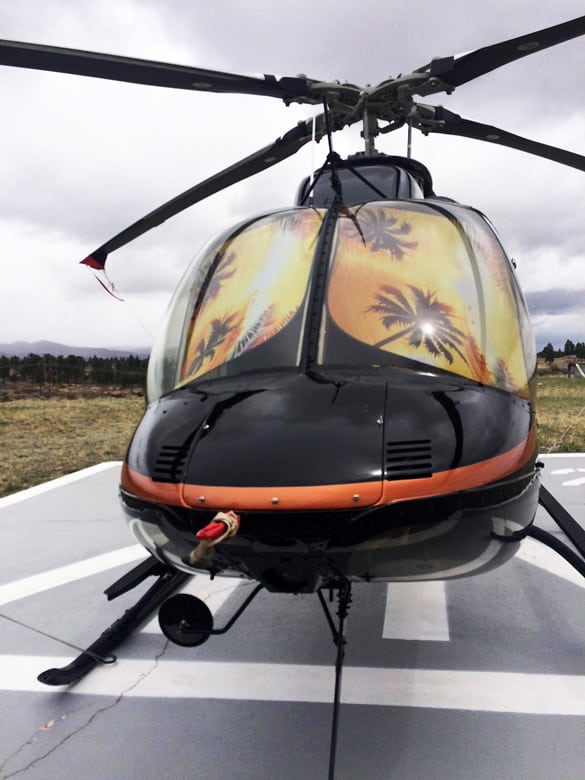 L’Esperance said LANL has changed the type of fire they can expect.

“What we’re looking at now is a perhaps a lower intensity ground type fire fueled by fine fuels. We had that weather anomaly last year where we had the wet summer right in the middle of the drought. We were hoping that was the end of the drought, however what it did was it created this re-generation of fine fuels throughout the area, so we’ve got those tall standing fuels and we have no snow,” he said.

He said the snow packs down those fuels and they’re not available to burn but that because of the lack of snow, there are tall-standing fuels in the area.

“We didn’t get the winds or the snow, so the leaves even on the oak are still standing and what we ended up with is an elevated fuel bed which is more available to burn in a much more rapid rate. Those fine type fires actually kill more people than those crown fires,” L’Esperance said. “It’s a dangerous situation and it’s widespread. Resources are going to be stretched – we already know that.”

He said the fire season readiness review has been started 30 days early to try to make sure to be prepared.

“When you think about our fire department here, we have a 130-man fire department with 40 people on staff at any one time. So, if you take that and figure an engine is going to occupy at least three people and it’s probably going to take two people to defend each structure, so we can defend probably effectively five structures at one time. So that doesn’t leave us a lot of room,” L’Esperance continued.

He said what he prefers as a term is “survivable space”.

“The work that we like to do at the Laboratory is focused on a survivable space -where we can create something that has that dead fuel reduced to the amount that the fire can burn right up to the site, close to the site, drop to the ground and then creep up and not actually involve the structure,” he said. “That’s what we tune our models to. That’s what we try to achieve whenever we’re doing those fuel mitigation treatments.”

L’Esperance also discussed SimTable technology which he said is part of the cohesive work the Laboratory with the National Park Service and Santa Fe National Forest does at the Jemez Interagency Fire Base at TA-49.

“All the fire managers for the region are housed in one location so we coordinate face to face on a daily basis so when I come up with a hair-brained scheme, I walk down the hallway and talk to somebody who really knows and get some good sound advice,” he said. “The other thing we do is we tie into each other’s projects. If Bandelier is conducting an operation, a thinning project or a burn operation, we can review those plans and see how we can best enhance those on the Laboratory and possibly make them more effective. And we have been successful in doing that.”

He said with the Las Conchas Fire, Bandelier was planning a burn on the south side of the highway beforehand.

“We looked at that plan and we decided that there was one spot where that could possibly jump and come onto Laboratory property, so we treated that area of about 300 acres and that was the one spot where the fire did jump the highway. We were able to contain it and keep it down to less than three acres.  Sometimes it just pays better to be lucky than good. It worked that time,” L’Esperance said.

He said since then, the Laboratory has changed its strategy so instead of cherry-picking different sites they were able to come up with a plan to surround the Laboratory with a border or greenbelt.

“You can see that as you travel around East Jemez Road, West Jemez Road and State Road 4. You’ll notice some of those prescriptions are a little bit different. If you look at the prescription that we’ve employed on the East Jemez Road, you’ll see that there’s no heavy fuels next to the road for 150 feet,” L’Esperance said. “The reason for that is that I’ve had to evacuate this Laboratory many times, I know it takes 2 and a half hours to do that. I can’t have you sitting in your vehicle next to a burning tree, so we removed those fuels to eliminate that hazard. Those are our primary evacuation routes.”

“If you look at the State Road 4 treatment, you’ll see a few more trees. We want to maintain some type of a natural environment. It’s not all about killing trees. Our goal is to return the forest to a pre-1900 condition. We want to make it look like a natural forest and we want to make it a sustainable and survivable forest,” he continued.

L’Esperance described how SimTable technology has changed how fires are managed greatly from the days of using a sandbox and a little army of figures.

“Now we have automated that and are able to project down the topography, shape that sand very quickly. We can project down the infrastructure, the utility landcover of the roadways, gas lines, anything that may be relevant to the fire. We can project it onto the screen and we can modify it,” he said. “We can run a model against it showing if you do this, this is going to happen. We’ve done literally thousands of models. With this technology, I can run 150 models a day and I validate my prescriptions.”

L’Esperance said SimTable technology is “really kind of neat stuff” that was developed in Santa Fe with a grant from LANL.

“We have been working with them now for a little over 10 years, just a little bit at a time, tweaking the program, and they have been able to work with us customizing the product, making it do what we want it to do,” he said, adding that SimTable creates a common operating picture and that it is unreal when you see it all functioning together.

L’Esperance answered questions after his presentation for those attending Science on Tap and invited the community to visit the Jemez Mountain Interagency Fire Agency.

Science on Tap is a project of the Los Alamos Creative District and happens every third Thursday of the month. Hosted by the Bradbury Science Museum, “Science On Tap” begins with an informal 15-minute talk followed by a lively group discussion. For more information, call 505.667.4444.