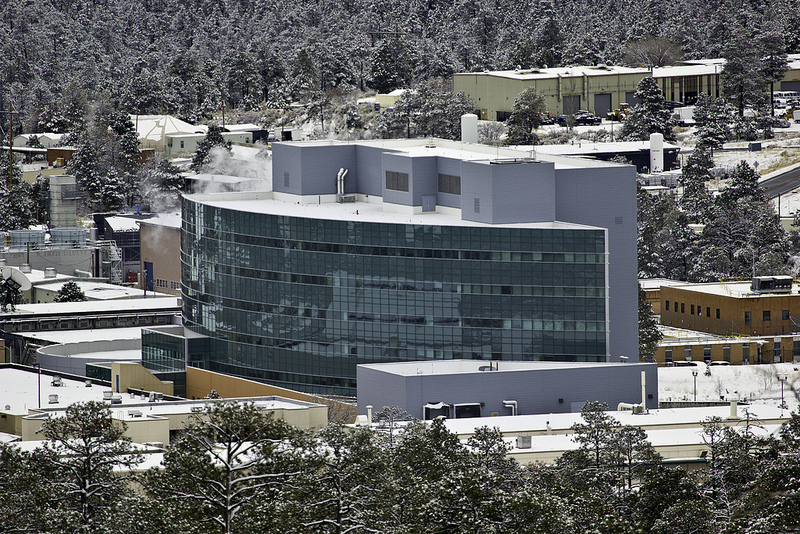 Top science stories for the year traveled from the canyons of Mars to the high desert forests of New Mexico, from cosmic particles to the structure of proteins and enzymes. Courtesy/LANL

Los Alamos National Laboratory made its scientific mark in a wide variety of areas, and the stories that caught the public’s attention and that of the science community reflect those broad capabilities.

Top science stories for the year traveled from the canyons of Mars to the high desert forests of New Mexico, from cosmic particles to the structure of proteins and enzymes.

Computer models of wildfires, and nuclear magnetic resonance signatures of plutonium, it all was fascinating for those following Los Alamos’ science news.

Los Alamos played a significant role in the success of the Mars Science Laboratory mission and its six-wheeled wonder, the Curiosity rover.

The international team of space explorers involved with the mission is relying in part on an instrument originally developed at Los Alamos called ChemCam, which fires an extremely powerful laser pulse to briefly focus the energy of a million light bulbs onto a pinhead-sized area on targets up to 23 feet away from the rover.

ChemCam reads the resultant flash of light to determine the composition of the target, and is part of a suite of 10 instruments aboard the SUV-sized mobile laboratory that is determining the Red Planet habitability. (YouTube story: http://ow.ly/ggCgj)

Los Alamos also has roles in other aspects of the Mars Science Laboratory. The Lab developed crucial aspects of another instrument called CheMin, which uses X-ray diffraction to determine the composition of mineral samples collected and dropped into a funnel on the Curiosity rover. (Youtube video: http://ow.ly/ggCiZ)

“Because of the talent, intellect, creativity and determination of the scientists, engineers and technicians at Los Alamos, and across the NNSA’s nuclear enterprise, we have been able to deliver on the promise of Stockpile Stewardship for 20 years without full-scale testing,” said Laboratory Director Charlie McMillan. “It is our most important job, one that will continue well into the future.”

Combine the tree-ring growth record with historic information, climate records and computer-model projections of future climate trends, and you get a grim picture for the future of trees in the southwestern United States. That’s the word from a team of scientists from Los Alamos National Laboratory, the U.S. Geological Survey, University of Arizona and several other partner organizations. In a paper published in Nature Climate Change, “Temperature as a potent driver of regional forest drought stress and tree mortality,” the team concluded that in the warmer and drier Southwest of the near future, widespread tree mortality will cause forest and species distributions to change substantially.

Separately, in the world’s two largest drought experiments, both based in New Mexico, Nate McDowell seeks to determine specifically why and where trees are dying. McDowell’s large Los Alamos team is working to create a global monitoring system to determine where trees are dying, in order to improve predictions of future tree mortality. The team wants to determine how the rapid death of these trees—long-term carbon reservoirs—might create a significant new carbon source that could exacerbate the very climate change that’s driving the accelerated pace of forest mortality in the first place. (Youtube story: http://ow.ly/ggCno)

In a related story, a high-tech computer model called HIGRAD/FIRETEC, the cornerstone of a collaborative effort between the U.S. Forest Service Rocky Mountain Research Station and Los Alamos , provides insights that are essential for front-line fire fighters. The team is looking into levels of bark beetle-induced conditions that lead to drastic changes in fire behavior and how variable or erratic the behavior is likely to be. (YouTube story: http://ow.ly/ggCpi)

Los Alamos National Laboratory scientists devised a method to use cosmic rays to gather detailed information from inside the damaged cores of the Fukushima Daiichi nuclear reactors, which were heavily damaged in March 2011 by a tsunami that followed a great earthquake.

Cosmic-ray radiography (also called muon radiography) uses secondary particles generated when cosmic rays collide with upper regions of Earth’s atmosphere to create images of the objects that the particles, called muons, penetrate. The process is analogous to an X-ray image, except muons are produced naturally and do not damage the materials they contact. Researchers compared two methods for using cosmic-ray radiography to gather images of nuclear material within the core of a reactor similar to Fukushima Daiichi Reactor No. 1. The team found that Los Alamos’ scattering method for cosmic-ray radiography was far superior to the traditional transmission method for capturing high-resolution image data of potentially damaged nuclear material.

“We now have a concept by which the Japanese can gather crucial data about what is going on inside their damaged reactor cores with minimal human exposure to the high radiation fields that exist in proximity to the reactor buildings,” said Konstantin Borozdin of Los Alamos’ Subatomic Physics Group. The research appeared in Physical Review Letters.

Heat-pipe technology—a sealed tube with an internal fluid that can efficiently transfer heat produced by a reactor with no moving parts—was invented at Los Alamos in 1963. Using heat pipes in tandem with the simple, closed-loop technology of Stirling engines allowed for creation of a reliable electric power supply that can be adapted for space applications.

DUFF is the first demonstration of a space nuclear reactor system to produce electricity in the United States since 1965. The experiment was taken from concept to completion in six months for less than a million dollars, and was made possible through Los Alamos’s Laboratory-Directed Research and Development Program (LDRD), which is funded by a small percentage of the Laboratory’s overall budget to invest in new or cutting-edge research. (YouTube story: http://ow.ly/ggCsh)

The newest supercomputer at the Laboratory, Cielo, is sometimes used to do fascinating science when a computer model is so large that it can’t be run on a smaller platform. One example that ran recently on Cielo—a 1.35 petaflop/s machine built by Cray—is a model by Robert Weaver of Theoretical Design Applications Physics that looked at how a 1-megaton nuclear energy source might affect the granular asteroid Itokawa as a way to prevent a potential asteroid impact with Earth. (YouTube story: http://ow.ly/ggCvl)

The basic problem is that conventional high explosives and insensitive high explosives behave very differently upon detonation. The experiments were designed to see if there is a way to use insensitive explosives without changing certain conditions needed to initiate a nuclear trigger.

An international research team, including Los Alamos scientists, discovered molecular oxygen ions in the upper-most atmosphere of Dione, one of 62 known moons orbiting Saturn. The instruments aboard NASA’s Cassini spacecraft enabled the research. These observations are definitive examples of a process by which a lot of oxygen can be produced in icy celestial bodies that are bombarded by charged particles or photons from the Sun or whatever light source happens to be nearby. Perhaps even more exciting is the possibility that on a moon with subsurface water, such as Jupiter’s moon Europa, molecular oxygen could combine with carbon in subsurface lakes to form the building blocks of life.

Los Alamos scientists helped develop the special cameras used by the Interstellar Boundary Explorer (IBEX) spacecraft to sample interstellar atoms—raw material for the formation of new stars, planets and even human beings. IBEX directly sampled material carried from outside our solar system across the galaxy by solar and stellar winds.

Laboratory expertise in radiation detection and shielding is poised to help scientists better understand a mysterious region that can create hazardous space weather near Earth. The Helium Oxygen Proton Electron analyzer is one of a suite of instruments that was successfully launched as part of the Radiation Belt Storm Probe mission—an effort by NASA and the Johns Hopkins University’s Applied Physics Laboratory to gain insight into the Sun’s influence on Earth and near-Earth space by studying our planet’s radiation belt. Understanding the radiation belt environment and its variability has important practical applications in the areas of spacecraft operations, spacecraft and spacecraft system design, and mission planning and astronaut safety. The ability to design and build an instrument to provide precise measurements under demanding high-energy conditions enables the mission and can provide useful expertise for future intelligence applications.

The Los Alamos Lujan Center’s Protein Crystallography Station (PCS) forms the core of a capability for joint neutron and X-ray macromolecular structure and function determination. Neutron crystallography is a powerful technique for locating hydrogen atoms that can be hard to detect using X-rays. The PCS provides unique information about hydrogen’s involvement in the function of biological macromolecules. This information is needed to understand the details of enzyme mechanism, drug binding, or protein hydration and dynamics.

How drugs bind to their enzyme targets is revealed: Scientists used the PCS to determine the first neutron structure of a clinical drug binding to its human target enzyme. Neutrons offer the only direct observation of the charged state of drugs when they are bound to their targets. This information yields clues for optimizing specific chemistries involved with binding. A detailed understanding of structure and drug binding in the enzyme’s active site provides a new avenue for rational, structure-based drug design.

Los Alamos and Japanese scientists detected the unique Nuclear Magnetic Resonance (NMR) signature of Pu-239. Scientists have sought the Pu-239 NMR signal for more than 50 years. This signal could help decipher the complex atomic-scale electronic properties of the element. These properties have a decisive role in the metallurgy and chemical reactivity of Pu alloys and compounds. The discovery could revolutionize the understanding of Pu solid-state physics, chemistry, biology and materials science.