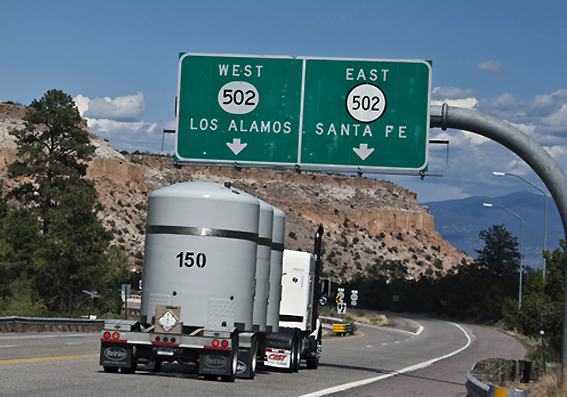 In the first year of an effort to accelerate shipments of transuranic (TRU) waste to the Waste Isolation Pilot Plant (WIPP), Los Alamos National Laboratory shattered its own record with 59 more shipments than planned, and became one of the largest shippers of this type of nuclear waste in the country.

In an agreement between the New Mexico Environment Department and the Department of Energy, Los Alamos has committed to removing 3,706 cubic meters of TRU waste stored above ground by June 30, 2014.

“We plan to build on the success of our first year and more than double the amount of waste that we ship in 2013,” said Dan Cox, deputy associate director of environmental programs at Los Alamos.

“A lot of people have worked together to make the first year of this effort a success, including the state, the Department of Energy, WIPP and the Laboratory,” said Pete Maggiore, assistant manager for environmental operations at the NNSA Los Alamos Site Office. “We exceeded our goals and are on track to double both volume and shipments this coming year.”

Transuranic elements such as plutonium have an atomic number greater than uranium, so they are labeled transuranic, for “beyond uranium” on the periodic table of elements.

About 90 percent of the current TRU waste inventory is a result of decades of nuclear research and weapons production at the Laboratory. It is often referred to as “legacy” waste.

The DOE Waste Isolation Plant facility is designed to safely isolate defense-generated TRU waste from people and the environment.

Waste temporarily stored at sites around the country is shipped to WIPP and permanently disposed in rooms mined out of an ancient salt formation 2,150 feet below the surface.

WIPP began waste disposal operations in 1999. The facility is located 26 miles outside of Carlsbad.