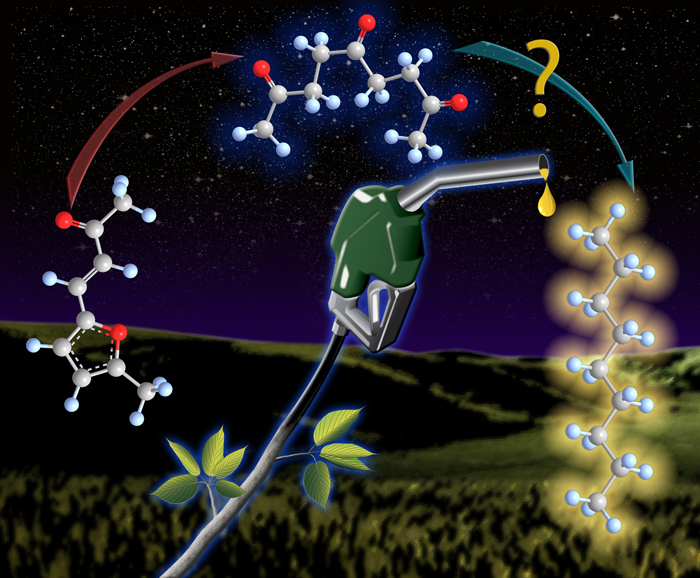 Artist’s conception of the process: Researchers open up a component of the biofuel molecule, called a furan ring, to make it easier to chemically alter. Opening these rings into linear chains is a necessary step in the production of energy-dense fuels, so these linear chains can then be converted into alkanes used in gasoline and diesel fuel. Image by Josh Smith/LANL

Scientists made a major step forward recently towards transforming biomass-derived molecules into fuels.

The team led by Los Alamos National Laboratory researchers elucidated the chemical mechanism of the critical steps, which can be performed under relatively mild, energy-efficient conditions.

“Efficient conversion of non-food biomass into fuels and chemical feedstocks could reduce society’s dependence on foreign oil and ensure the long-term availability of renewable materials for consumer products,” said John Gordon, one of the senior Los Alamos scientists on the project.

“Also, efficient conversion could decrease the production of greenhouse gases. However, current technologies to convert biomass into fuels require extreme conditions of high temperatures and high pressures, both of which make the conversion process prohibitively expensive.”

The study provides important insight into a critical step in biomass fuels synthesis and it may enable the design of better, non-precious-metal catalysts and processes for large-scale transformation of biomass into fuels and commodity chemicals.

The Ring of Simplicity

For more than a century, chemists focused on a “more is better” approach, adding functionality to molecules, not removing it. For this breakthrough, however, researchers applied the opposite strategy and aimed for simplicity, opening up a component of the molecule to make it easier to transform. They perfected a method for “direct-ring opening” of the furan rings, which are made of four carbons and one oxygen atom, and that are ubiquitous in biomass-derived fuel precursors.

Opening these rings into linear chains is a necessary step in the production of energy-dense fuels, said Gordon, because these linear chains can then be reduced and deoxygenated into alkanes used in gasoline and diesel fuel. The reaction requires relatively mild conditions using the common reagent hydrochloric acid as a catalyst.

The researchers tested the process on several biomass-derived molecules, and they performed calculations to study the selectivity and mechanism of reaction. This information is key to designing better catalysts and processes for biomass conversion.

The Los Alamos researchers include Christopher Waidmann of Nuclear and Radiochemistry; John Gordon of Inorganic, Isotope and Actinide Chemistry; Aaron Pierpont, Enrique Batista, and Richard Martin of Physics and Chemistry of Materials; L. A. “Pete” Silks and Ruilian Wu of Bioenergy and Biome Sciences. The Los Alamos Laboratory Research and Development program funded the work.