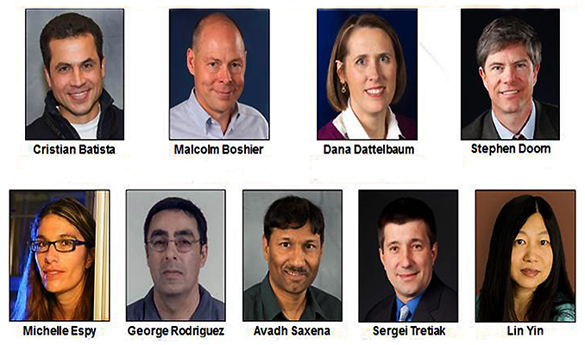 “Selection as American Physical Society fellows is de facto proof of the vibrant engagement Los Alamos scientists are having with the larger technical community,” LANL Director Charlie McMillan said. “I am proud of the contributions Los Alamos scientists bring to these professional societies through papers, scientific conference attendance, and other professional interactions. Collaboration and the exchange of ideas through affiliations within societies such as APS play an important role in fueling the scientific innovation required to accomplish our national-security mission.”

Malcolm Boshier was selected for his work in high-precision laser spectroscopy of hydrogen and muonium, and for advancing the state of the art in cold atom manipulation. He was nominated by the Division of Atomic, Molecular and Optical Physics. Boshier is part of the Laboratory’s Applied Modern Physics group.

Dana Dattelbaum, of the Laboratory’s Shock and Detonation Physics group, was recognized for pioneering studies of dynamic properties and excited state behavior of materials using advanced diagnostics techniques and for her leadership and service to the Society and the Shock Physics community. She was nominated by the Topical Group on Shock Compression of Condensed Matter.

Stephen Doorn, of the Laboratory’s Center for Integrated Nanotechnologies, was nominated for his pioneering accomplishments in defining, shaping and leading the field of spectroscopic characterization of carbon nanomaterials, including single-walled nanotubes and graphene. He was nominated by the Division of Laser Science.

Michelle Espy, also of Applied Modern Physics, was nominated for her work on the application of nuclear physics techniques to biomedical research and national security challenges including pioneering work in the application of ultra-low field nuclear magnetic resonance to functional brain imaging and non-invasive identification of materials for national security. She was nominated by the Division of Nuclear Physics.

George Rodriguez was nominated for his outstanding leadership in the development of ultrafast laser-based and high-speed optical instrumentation and his creative application of these diagnostics to the impactful measurement of materials, systems, and devices. He was nominated by the Topical Group on Instrument and Measurement Science. Rodriguez is also part of the Center for Integrated Nanotechnologies.

Avadh Saxena works in the Laboratory’s Physics of Condensed Matter and Complex Systems group and was nominated for foundational contributions to phase transitions in functional materials and nonlinear excitations in low-dimensional electronic materials. He was nominated by the Division of Materials Physics.

Sergei Tretiak was selected for seminal contributions to the theoretical chemistry of excited state dynamics in nanoscale materials and nonlinear optical response of molecular systems. He was nominated by the Division of Chemical Physics. Tretiak works in the Laboratory’s Physics and Chemistry of Materials group and Center for Integrated Nanotechnologies.

Lin Yin, of the Laboratory’s Plasma Theory and Applications group, was nominated for scientific leadership and landmark discovery in the theory and complex kinetic modeling of nonlinear laser-plasma interaction physics, including stimulated Raman scattering and laser-driven particle acceleration. She was nominated by the Division of Plasma Physics.

The American Physical Society is a non-profit membership organization working to advance and diffuse the knowledge of physics through its outstanding research journals, scientific meetings, and education, outreach, advocacy and international activities. APS represents more 50,000 members, including physicists in academia, national laboratories and industry in the United States and throughout the world.