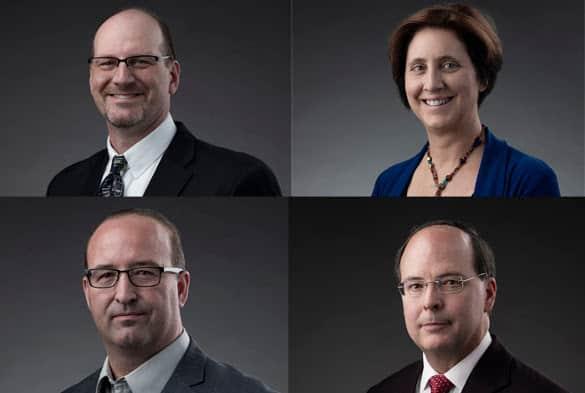 The American Physical Society Fellows inductees, top left to right), Brian Albright and Jennifer Hollingsworth and bottom left to right, Brian J. Jensen and Brian Kendrick. Courtesy photo
LANL News:
The American Physical Society (APS) has selected the Society’s 2018 Fellows, four of which are Los Alamos National Laboratory scientists: Brian Albright, Jennifer Hollingsworth, Brian J. Jensen and Brian Kendrick.
“I congratulate Brian, Jennifer, Brian, and Brian on their selection as American Physical Society Fellows,” said John Sarrao, principal associate director for Science, Technology and Engineering at Los Alamos. “These individuals highlight the breadth of scientific innovation and expertise that support the Lab’s national security mission. Recognition of their accomplishments by the American Physical Society demonstrates the vibrant engagement that the Laboratory’s physicists have with the external scientific community and their contributions to physics research.”
“On behalf of the APS, I’m pleased to congratulate all of the Society members who have been recognized by their peers through their selection as 2018 APS Fellows,” APS Chief Executive Officer Kate Kirby said. “It’s particularly gratifying to see that so many of the Fellows elected this year are women.” Of the 155 new APS Fellows, 23 percent are women; a 77 percent increase in the fraction of women Fellows over the 2017 class.
The Los Alamos honorees come from a wide range of organizations at the Laboratory:
Brian Albright (X-Theoretical Design Division) was nominated “for outstanding contributions to the theory and modeling of kinetic plasmas, including pioneering work in laser-driven ion acceleration, laser plasma instabilities, high energy density physics and particle-in-cell simulations.” He was nominated by the APS Division of Plasma Physics. Albright has received four DOE Defense Programs Awards of Excellence and four Distinguished Performance Awards. He is a 2017 recipient of the LANL Fellows Prize for Leadership in Science or Engineering and he has written 104 articles in the unclassified literature, which have been cited 5,125 times. He has also written 97 classified articles and reports. He serves as the Lab point of contact for Boost Science for Stockpile Applications as well as a project leader with the Advanced Simulation and Computing, Experimental Sciences, and Inertial Confinement Fusion programs.
Jennifer Hollingsworth (MPA Center for Integrated Nanotechnologies) was nominated “for the discovery and development of non-blinking giant quantum dots (gQDs), spanning pioneering contributions to materials chemistry, the photophysics of excited-state processes in nanomaterials and applications in optoelectronics.” She was nominated by the APS Division of Material Physics. Of her 100 publications (more than 10,800 citations, h-index of 42), she has, as principal investigator or in close collaboration with colleagues, detailed her gQD research in a series of more than 35 papers (more than 3,200 citations), including two invited review articles. Her initial work on this topic led to a US patent for both the novelty of the QD structure and the resulting photophysical properties. Moreover, the implications of the novel gQD performance behavior have been demonstrated for a range of applications from solid-state lighting to 3D single-molecule tracking in live cells and nanoscale thermometry. Lastly, through the CINT User Program, her uniquely photostable quantum emitters are enabling the work of materials physicists around the world. Hollingsworth received the LANL Fellows Prize for Research in 2013 and became a Laboratory Fellow in 2016.
Brian J. Jensen (Shock and Detonation Physics Division) was cited “for technical leadership in the physics of materials at high pressures, for technical advances in dynamic x-ray diffraction and phase contrast imaging, and for sustained leadership and service to the American Physical Society and the shock physics community.” Nominated by the APS Shock Compression of Condensed Matter Topical Group, Jensen received a Ph.D. in Physics from Washington State University. He joined the Lab in 2004. Areas of research include dynamic, multiphase equation of state for metals, including phase transitions, melting and temperature measurements; x-ray diffraction and phase contrast imaging under shock loading conditions; and dynamic experimental facility and advanced diagnostic development. He has received five NNSA Defense Programs Award of Excellence.
Brian Kendrick (Theoretical Division) was cited “for the development and application of new computational methods to include the geometric (Berry) phase in molecular collisions and spectra using the gauge potential approach.” Nominated by the APS Division of Atomic, Molecular and Optical Physics (DAMOP), Kendrick has published over 70 peer reviewed journal articles which include Nature Communications, Physical Review Letters and The Journal of Chemical Physics. Other honors include LANL Distinguished Achievement Award (Weapons Systems Engineering Division, 2015), LANL Distinguished Achievement Award (Theoretical Division, 2013), Distinguished Performance Award (DOE Energy Innovation Hub CASL, 2013), and Leon Heller/LANL Postdoctoral Publication Prize in Theoretical Physics, 1998.
The APS Fellowship Program was created to recognize members who may have made advances in physics through original research and publication or made significant innovative contributions in the application of physics to science and technology. They may also have made significant contributions to the teaching of physics or service and participation in the activities of the Society.
Menu
Los Alamos
70°
Showers in the Vicinity
5:48am8:24pm MDT
Feels like: 70°F
Wind: 5mph N
Humidity: 40%
Pressure: 29.85"Hg
UV index: 0
SatSunMon
86/63°F
90/66°F
84/59°F
Weather forecast Los Alamos, New Mexico ▸