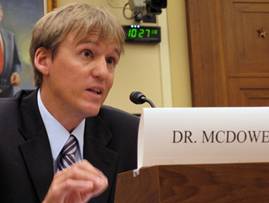 The Los Alamos Master Gardeners and Los Alamos Extension Office are sponsoring a program by Nate McDowell, a staff scientist in the Earth and Environmental Sciences Division at Los Alamos National Laboratory.

McDowell will share his research methods and results with the community at 7 p.m. Thursday, Nov. 1 at Fuller Lodge.

McDowell studies the inter-dependency of plant and ecosystem water and carbon cycles and their response to climate and disturbance.

What are the exact physiological mechanisms that lead to tree death during prolonged drought and rising temperatures?

These are the questions that scientists are trying to answer at a Los Alamos National Laboratory research project called SUMO.

SUMO stands for SUrvival/MOrtality study; it’s a plot of land on the Lab’s southern border that features 18 climate controlled tree study chambers and a large drought structure that limits rain and snowfall.

Scientists are taking a wide variety of measurements over a long period of time to determine what happens during drought and warming, and what the connections and feedback loops might be between tree death and climate change.

McDowell has published approximately 65 papers since 2000 and has raised $20 million in grant funding during his tenure at LANL.

He was awarded both LANL’s and DOE’s Distinguished Mentor Award for advising undergraduates in 2008 and 2010, respectively, DOE’s Early-Career Award in 2010 and testified before Congress regarding DOE’s climate change research in 2009.

Click this link to view a LANL video of the project: http://www.youtube.com/watch?feature=player_embedded&v=6-eyL1AlMoM