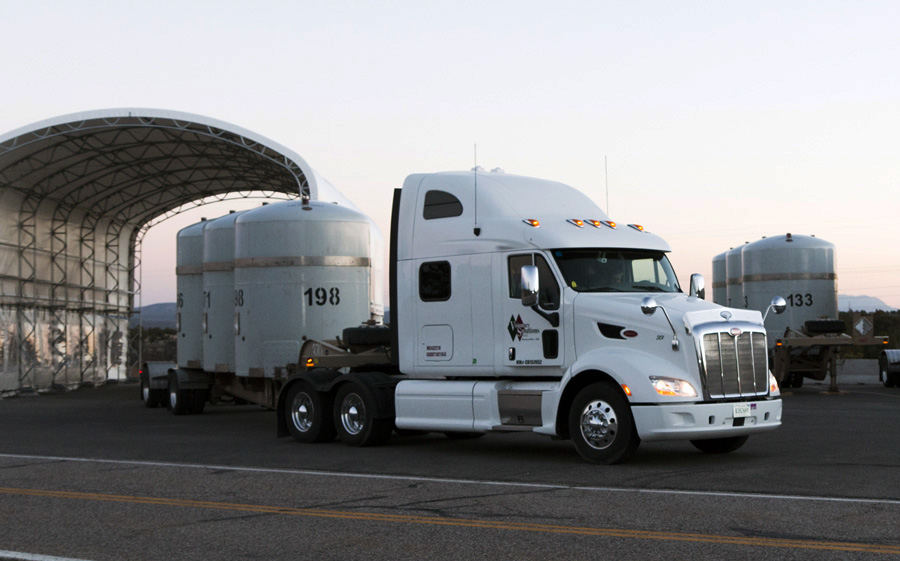 The shipments are part of an accelerated shipping campaign to remove 3,706 cubic meters of transuranic waste stored aboveground at Area G by June 30, 2014. Nearly 3,200 cubic meters of the waste have already been removed since the 3706 campaign began in January 2012.

The waste was received at Waste Control Specialists (WCS) in Andrews, Texas, where it will be temporarily staged until it can be shipped to the Waste Isolation Pilot Plant (WIPP) near Carlsbad for final disposal. Shipments to WIPP ceased following a Feb. 5 underground truck fire and a Feb. 14 radiological event.

The temporary staging arrangement is part of an agreement between WCS and Nuclear Waste Partnership, the management and operating contractor at WIPP. The transuranic waste from Los Alamos to be stored at WCS meets their license requirements and has been coordinated and approved by the appropriate regulatory authorities.

“Our commitment to the State of New Mexico is to remove the waste stored aboveground so it would not pose a risk in the event of another wildfire in Los Alamos,” said Pete Maggiore, manager of the environmental programs office for the Department of Energy’s National Nuclear Security Administration Los Alamos Field Office. “Staging the waste at WCS is the best option available to ensure the Lab meets its commitment without delay.”

Los Alamos has been ahead of schedule since the campaign began and estimates that approximately 100 shipments remain. After an initial ramp up, as many as 10 shipments per week will be scheduled to complete the campaign.

Transuranic waste consists of clothing, tools, rags, debris, soil, and other items contaminated with small amounts of radioactive elements, mostly plutonium. Each of these man-made elements has an atomic number greater than uranium.

About 90 percent of the current transuranic waste inventory is the result of decades of nuclear research and weapons production at the Laboratory.