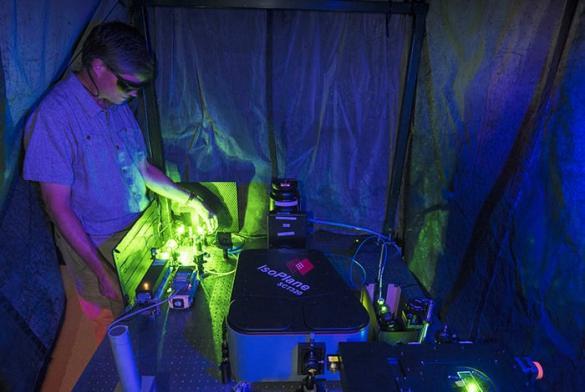 “Observing this behavior in carbon nanotubes suggests there is potential to detect and control a similar response in more complex, multi-layered semiconductor and semiconductor-metal heterostructures,” said Stephen Doorn, of the Center for Integrated Nanotechnologies at Los Alamos and a coauthor of the study, recently published in Nature Communications.

Carbon nanotubes are cylinders of graphene with their atoms arranged in hexagons. They are of interest as near-infrared light emitters and nanoscale semiconductor materials for electronics and optoelectronics applications.

Excitons effectively carry energy in carbon nanotubes as tightly bound pairs of negative and positive charge (electrons and holes). Excitons are created when light is absorbed by the material. Interactions between individual elements of nanomaterials can give rise to new emergent behaviors, such as exciton condensation. Carbon nanotube intertube excitons—those excitons that tunnel between tubes—add to the range of observed exciton behaviors.

In the study, a collaborative research team from Los Alamos National Laboratory, the Center for Integrated Nanotechnologies and the National Institute of Standards and Technology showed that Raman spectroscopy (a form of light scattering) can provide more extensive characterization of intertube excitons. The team used chemical separations to isolate a sample of a single type of carbon nanotube structure. The nanotubes in these samples were then bundled to force interactions between individual nanotubes.

To profile the carbon nanotube exciton energies, the team measured the intensity of Raman scattered light as they varied the wavelength of light. Surprisingly, the team found a previously unobserved sharp feature in the Raman profile of the bundled carbon nanotubes. This unexpected feature was not found for non-interacting individual carbon nanotubes.

Theoretical analysis showed that the unique packing geometry produced in bundles composed of a single carbon nanotube structure results in chains of closely interacting carbon atoms. These chains promote the formation of intertube excitons. Further analysis showed that the intertube excitons by themselves cannot interact with light in a way that generates the sharp feature. Instead, an interaction between the intertube excitons and intratube excitons leads to an exciton scattering process that is accompanied by a quantum interference. Such an interference results in a sharp asymmetric feature known as a Fano resonance that was identified in the Raman measurement.

The team’s findings now generalize this behavior to a new class of exciton response in carbon nanotube assemblies, suggesting such behaviors may be found in a broader class of 2-dimensional quantum composite materials.

Funding: This work was supported in part by the Laboratory Directed Research and Development program and was performed in part at both the Center for Integrated Nanotechnologies (a Department of Energy Office of Science user facility jointly operated by Sandia and Los Alamos national laboratories) and the National Institute of Science and Technology in Gaithersburg, MD.