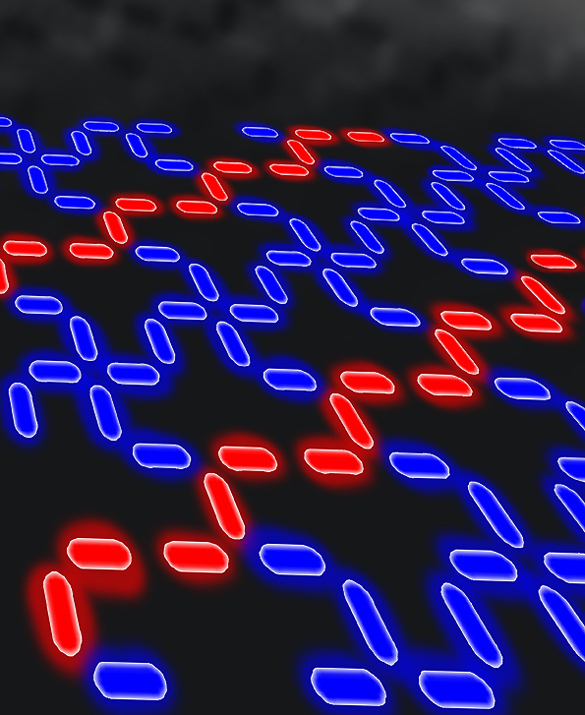 Researchers have created a nanoscale, artificial magnet by arranging an array of magnetic nano-islands along a geometry that is not found in natural magnets. As temperature is reduced, magnetic nanoislands (in blue) reach a one-dimensional static, ordered state, while those in red keep flipping thermally. The material decomposes into an alternation of ordered/disordered stripes. Courtesy/LANL

Scientists from Los Alamos National Laboratory, in collaboration with a group at the University of Illinois at Urbana-Champaign, the Lawrence Berkeley National Laboratory’s Advanced Light Source and with other researchers nationwide, have realized a nanoscale, artificial magnet by arranging an array of magnetic nano-islands along a geometry that is not found in natural magnets.

“Each nano-island is similar to a refrigerator magnet, with a north and a south pole at its tips,” Los Alamos physicist Cristiano Nisoli said. “Unlike a refrigerator magnet, however, it can change its magnetization by flipping north and south, through use of either applied fields or thermal fluctuations. But because these islands are brought together, they interact, and this interaction induces a collective behavior that can be exploited for emergent properties.”

Applications might range from general magnetism, such as developing sensors, to information encoding.

“This magnet is explicitly designed to exhibit dimensional reduction: in this case going from a two-dimensional behavior to a one-dimensional one,” Nisoli said. “As temperature is lowered to room temperature, the magnet crosses over from being a ‘standard’ magnet into a new and exotic state where it exhibits so called ‘dimensional reduction’ with alternating ordered and disordered stripes, with distinct kinetic behaviors among the two. The ordered stripes are static, while the disordered ones flip thermally.”

Interestingly, the behavior is not random, Nisoli notes, as the stripes and their behavior can be predicted via a 1D Ising model –the very first tool to understand phase transition, which theoretical physicists have been studying for about 80 years—he said.

Magnetic materials that exhibit exotic/useful behaviors are rare, found by chance in nature, and most of their interesting properties happen at temperatures that are so low as to limit technological applications.

Fabricating magnets with desired properties that are functional at useful temperature ranges is thus relevant for science, technology and national security. “This work belongs to an effort toward bottom-up design of magnets whose desired properties and emergent behaviors can be designed,” Nisoli said.

While this effort has provided a basic science advance by illustrating how emergent behaviors can be explicitly designed into a nanostructure, it can also lead to a material-by-design approach to magnetism that exploits the collective behavior of nano magnets.

This research is part of an effort that started in 2006, noted in a cover story in the journal Nature [Nature 439 (7074), 303-306 January 19, 2006]. At that time considerable research had been already performed on the magnetic properties of isolated nano-structures of different shapes.

“Our idea was to put these nano magnets together and make them interact to exploit their collective behavior and create artificial magnets that do not exist in nature,” said Nisoli.

Results were encouraging and but the team immediately encountered various challenges: how to randomize these systems, how to produce consistent magnetic ensembles,  and so on. The work was noticed around the world and more scientists began working on these new structures (so far there are groups in USA, Germany, Switzerland, England, Italy, France, Spain, Australia, Russia, Brazil, working on this), which was particularly useful, Nisoli noted, as it lead to faster development and new ideas.

Recently, with new experimental protocols that allowed for thermally active materials, [Nature 500 (7464), 553-557, 2003] Nisoli began designing dedicated topologies based on a new level of frustration [New Journal of Physics 15 (4), 045009, 20013]. Indeed frustration is an essential ingredient in the design of these materials.

The project called on the expertise of several illustrious science institutions: The geometry of the material was designed and studied at Los Alamos, by Muir Morrison (formerly a Los Alamos student, now a graduate student at Caltech), Tammie Nelson (a Los Alamos Feynman Fellow) and Cristiano Nisoli (a staff member in the Theoretical Division).

The magnet was designed explicitly, along with other geometries, for realization in the context of a longstanding collaboration with the group of Dr. Peter Schiffer (Professor of Physics and Vice Chancellor for Research at the University of Illinois at Urbana-Champaign [Illinois]).

The team nano-fabricated it from samples grown by the group of Prof. Chris Leighton at the University of Minnesota, and they performed the experiment at the Advanced Light Source at Lawrence Berkeley National Laboratory in collaboration with Dr. Andreas Scholl. Funding for the research, including the work led by Schiffer at Illinois, was provided by the US Department of Energy Office of Science. Work performed at the University of Minnesota (UMN) was supported by the National Science Foundation through the UMN MRSEC, as well as by EU Marie Curie IOF project. The Advanced Light Source is a DOE Office of Science User Facility.