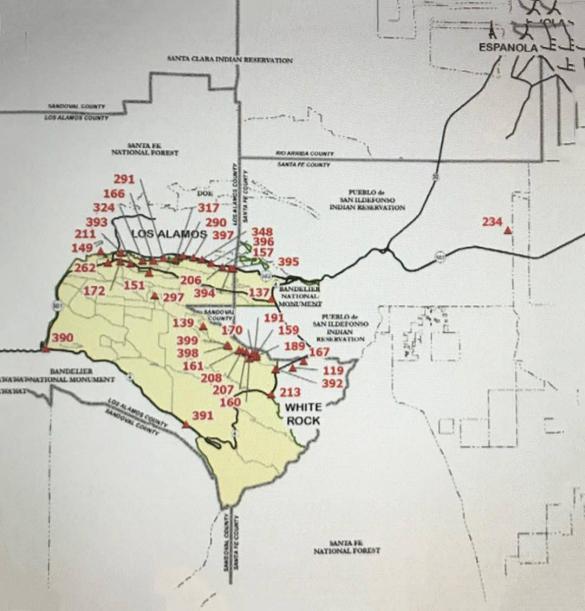 Los Alamos National Laboratory has released its 2017 Radionuclide Air Emissions report, which indicates that the highest effective dose equivalent (EDE) to an off-site member of the public for last year was 0.47 mrem. The annual limit is 10 millirem per year as established by the U.S. Environmental Protection Agency.

The information in this report is being submitted to EPA Headquarters and EPA Region 6.

All measured air emissions are modeled to a single location, known as the Maximally Exposed Individual (MEI). This year’s highest EDE was measured at an Airnet monitoring station at 2101 Trinity Dr.

“We are always looking for ways to lessen the impact of Laboratory operations on our environment. We’re pleased that our emissions are well below EPA requirements and we will continue to look for ways to reduce these levels even further,” a Lab spokesman told the Los Alamos Daily Post Monday.

The 2017 report states that to provide information for dispersion modeling and dose assessment, LANL maintains and operates meteorological monitoring systems from which a comprehensive evaluation is conducted to calculate the MEI dose for the Laboratory. The MEI can be any member of the public at any off-site location where there is a residence, school, business or office.

Last year’s MEI location was a cluster of businesses at 2101 Trinity Dr. on the rim of Los Alamos Canyon and since there are other receptors in the immediate area, all emissions were modeled to the adjacent Airnet Station 324 , the “Hillside 138” station. The report indicates that the primary contributor to the .47 mrem dose is the resuspension of legacy contamination on the hillside below the Airnet station. It states that cleanup activities in this legacy contamination area of the Los Alamos townsite as contaminated soil was removed from the south-facing slopes of Los Alamos Canyon resulted in increased resuspension in 2017.

The contaminated soil was caused by legacy outfalls and surface disposal during the Manhattan Project and early Cold War operations. Specialized equipment was used to access the steep slopes and uneven terrain of the Canyon and the work was completed July and August 2017.

The report noted slight increases in emissions from the LANSCE particle accelerator facility due to the increase in operational hours there and a general increase in radioactive materials handling at LANL’s minor sources.

“Overall, the MEI dose in 2017 is similar to levels in recent years and well below the EPA’s 10 millirem per year limit,” the Lab spokesperson said.