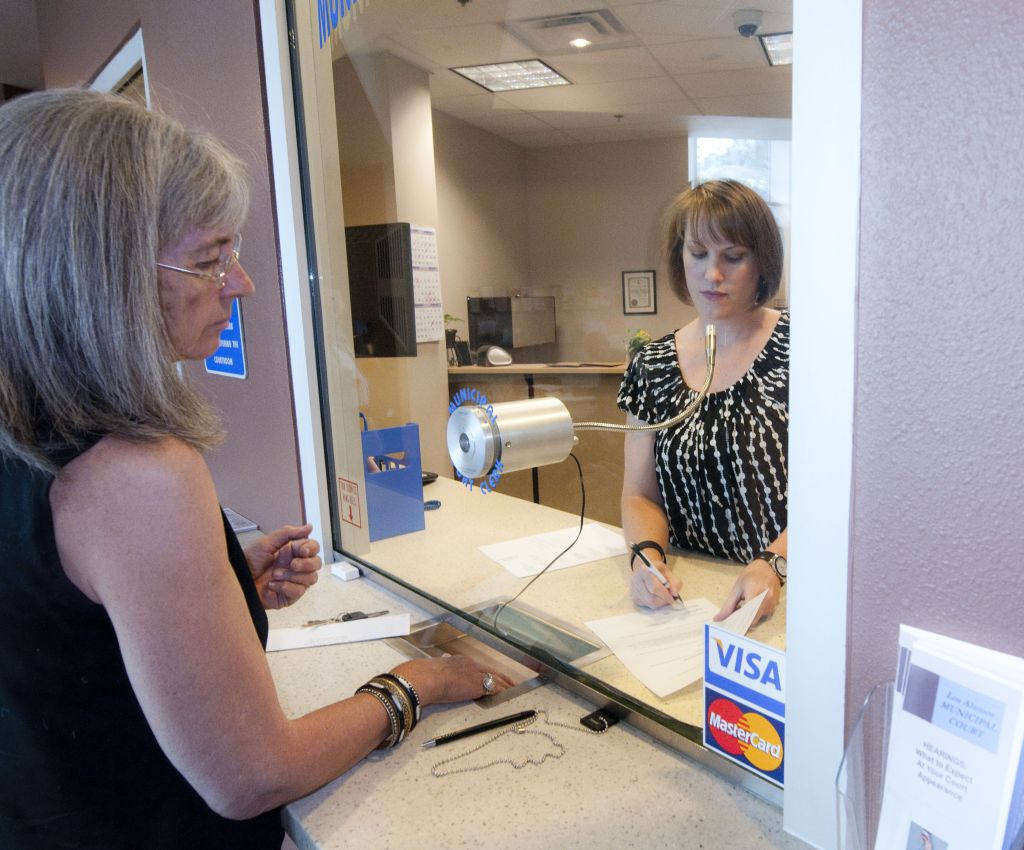 Each charge carries a potential fine of $500 and/or 90 days in jail.

Santa Fe attorney Jeffery Haas entered a motion on behalf of the protesters to excuse Kirk from the case. Haas indicated that believes Kirk’s impartiality is in question as a result of his prior role as Los Alamos police chief.

Haas stated in a written Notice of Excusal that, “this case will involve the credibility of Los Alamos County police officers with whom the judge is likely to know personally and he may well have a personal bias against the defendant[s] and in favor of the complaining witness.”

After today’s arraignment, Haas said that he felt that it was likely that Kirk would deny the excusal motion and a date for trial would be set within 60 days.

Following the court hearing, Alaric Balibrera ended his 25 day hunger strike by breaking bread with other protesters under the cooling shade of an Ashley Pond cottonwood tree.

“I would like to call upon one of the great spiritual laws, ‘as above so below,’ and to say that in order to change Los Alamos, what we need is a consciousness revolution inside our own hearts because no one else ever changed because we hated them,” Balibrera said. “They changed because we loved them. What I would like to do now is take a few moments and create that love for Los Alamos in our hearts and send it to Los Alamos to create light, to light up this dark corner of the world.”

Haas thanked Balibrera for bringing light to the Lab and went on to say, “we (must) realize that the security threat is not going to be resolved with nuclear weapons. The security threats to the world are climate change and the deprivation of the water, air and arable land. If the Lab used its resources to solve those problems, it would do a lot more toward the security of all of us.”

Although Balibrera has ended his 25 day fast, the hunger strike continues. The loosely organized group plans to continue the strike until next year’s Hiroshima day protest returns to Los Alamos.

Members of the group plan to fast in succession for a short period of days and then pass the strike on to another member of the group, unbroken over the next year.

The group envisions volunteers from across the globe fasting for a day or two or a week and then passing the strike on to other strikers in order to draw attention to their anti-nuclear message. 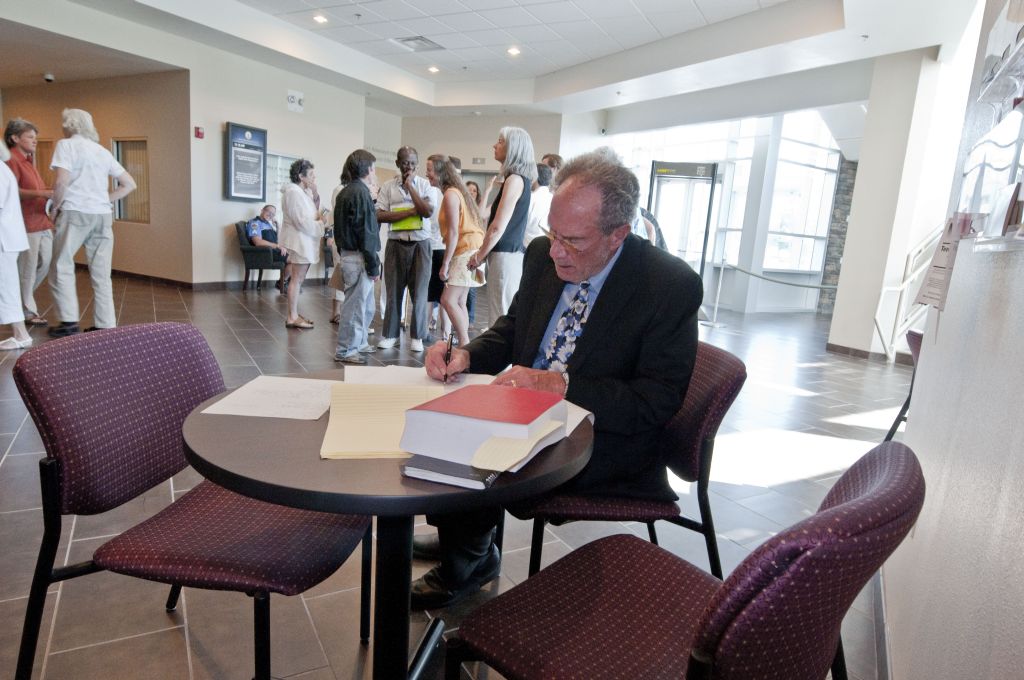 Santa Fe attorney Jeffery Haas makes adjustments to a “notice of excusal” after this morning’s arraignment for his clients at Los Alamos County Municipal Court, 2500 Trinity Drive, Suite C. Anti-nuclear protesters and others can be seen in the background in the Justice Center lobby. Photo by Greg Kendall/ladailypost.com 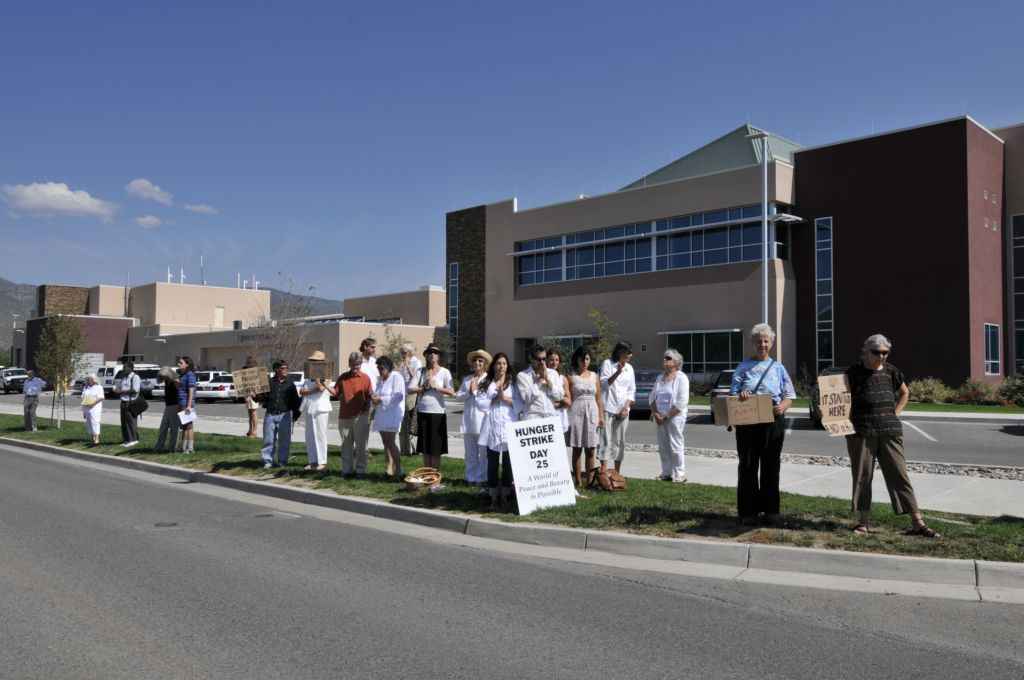 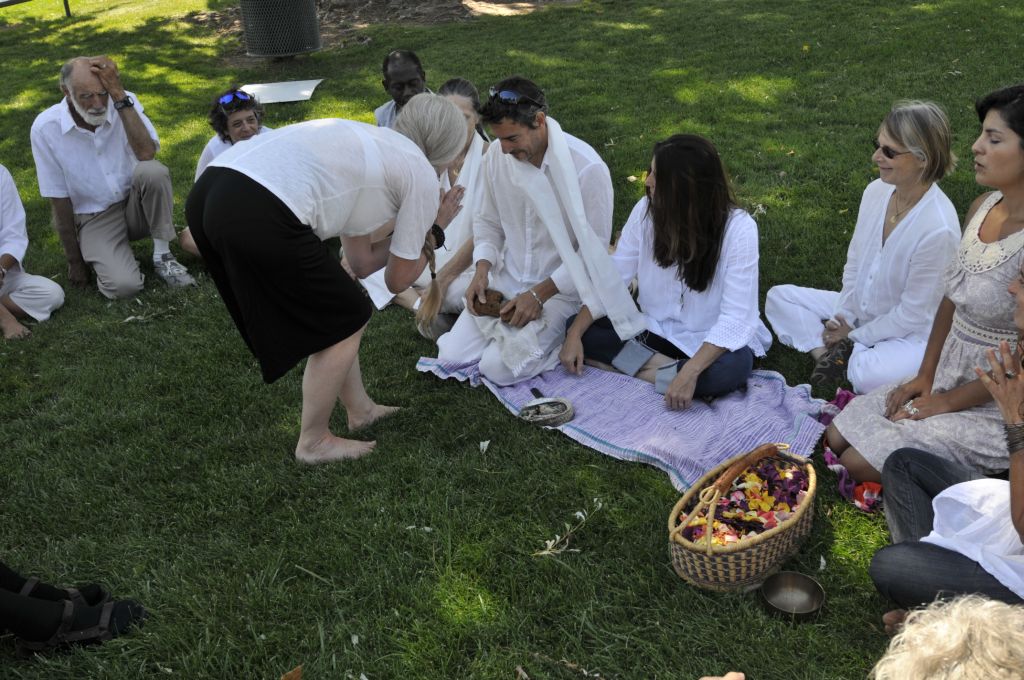 A ceremony was held that included five minutes of meditation, a prayer, sage burning and the ringing of a bell. Alec Balibrera, center, breaks bread and shares it with other anti-nuclear protesters moments before ending his 25 day hunger strike. Photo by Greg Kendall/ladailypost.com 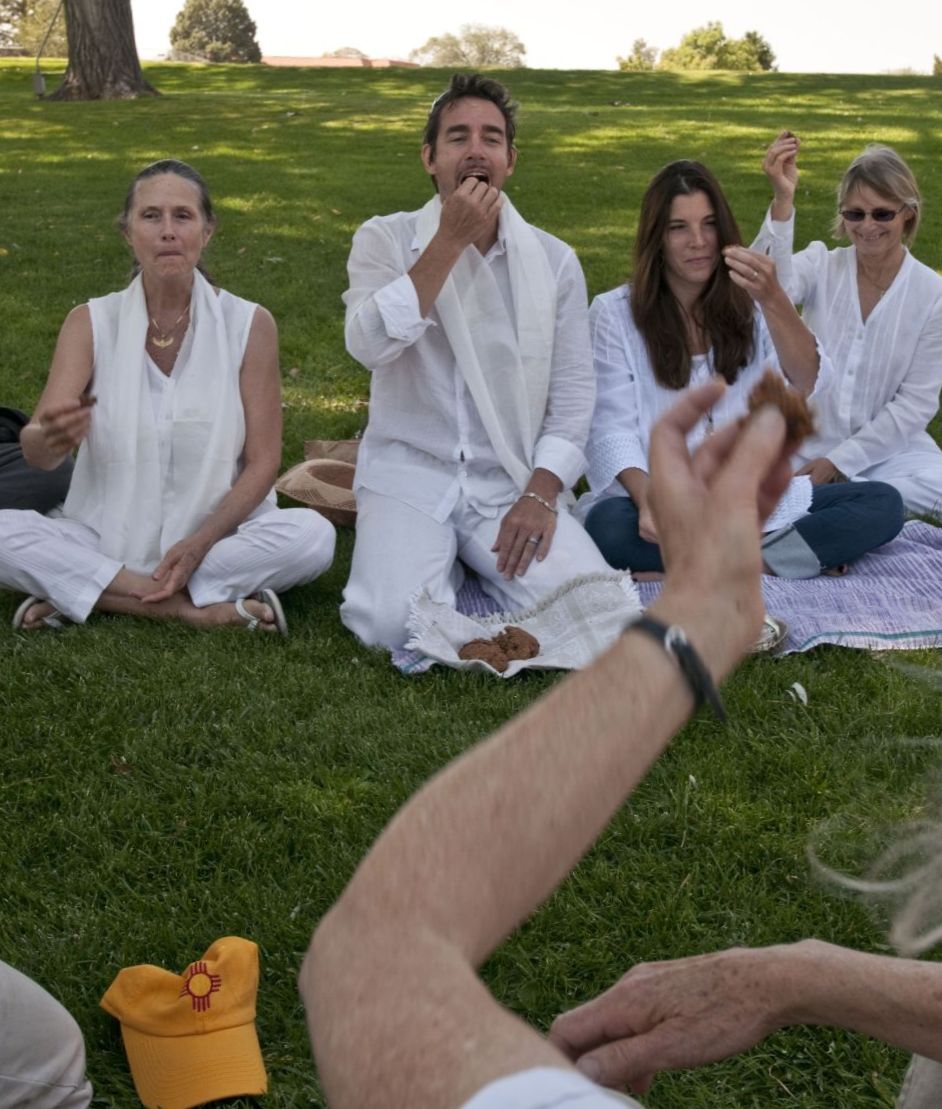 Alaric Balibrera, center, eats his first solid food in 25 days. Balibrera’s wife, Katherine Patton, sits to his right.  Patton is a supporter of both the hunger strike and the organization “Nuke Free Now.” Patton noted that she and Balibrera were both tired but that the collective energy of everyone was so strong that it kept their energy up during the strike, even though there were days when they were both exhausted. Photo by Greg Kendall/ladailypost.com 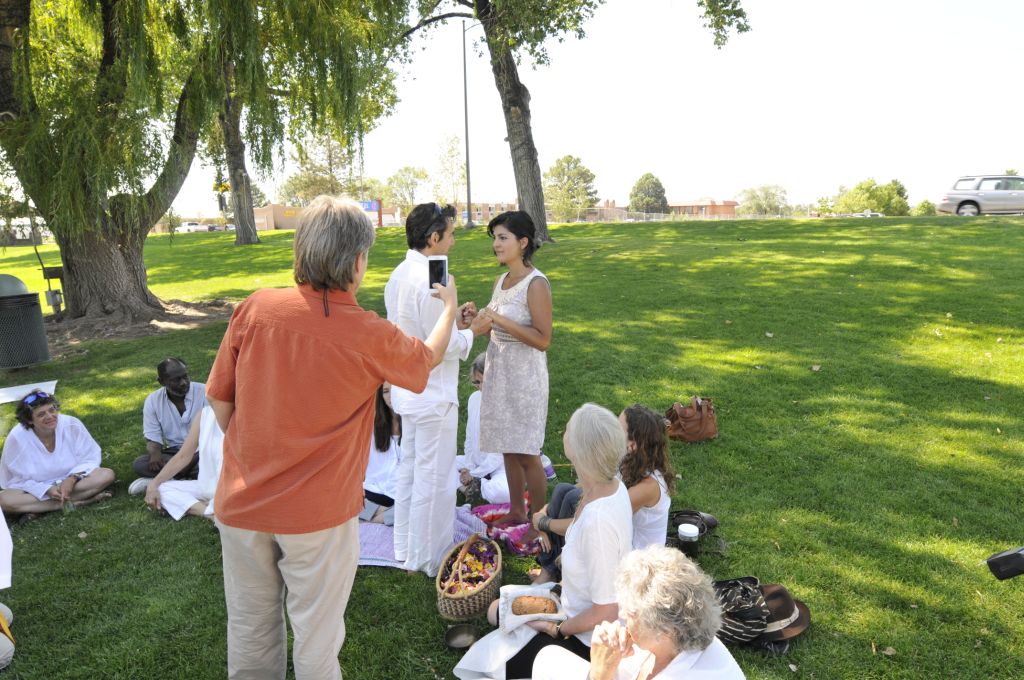 Alaric Balibrera, center, passes the hunger strike effort on to Maria Jose Ugalde, who plans to continue the strike and then pass it on to another member of the anti-nuclear protest group. “This is about the shields and barriers we all have to be broken down so we can be moved by love,” Ugalde said. “It’s the barriers that we have that let us do the things that we do, that let us hurt the earth and hurt each other. If those can be surmounted and we can restore sensitivity, then we can start doing things that are in congruence with that.” Photo by Greg Kendall/ladailypost.com 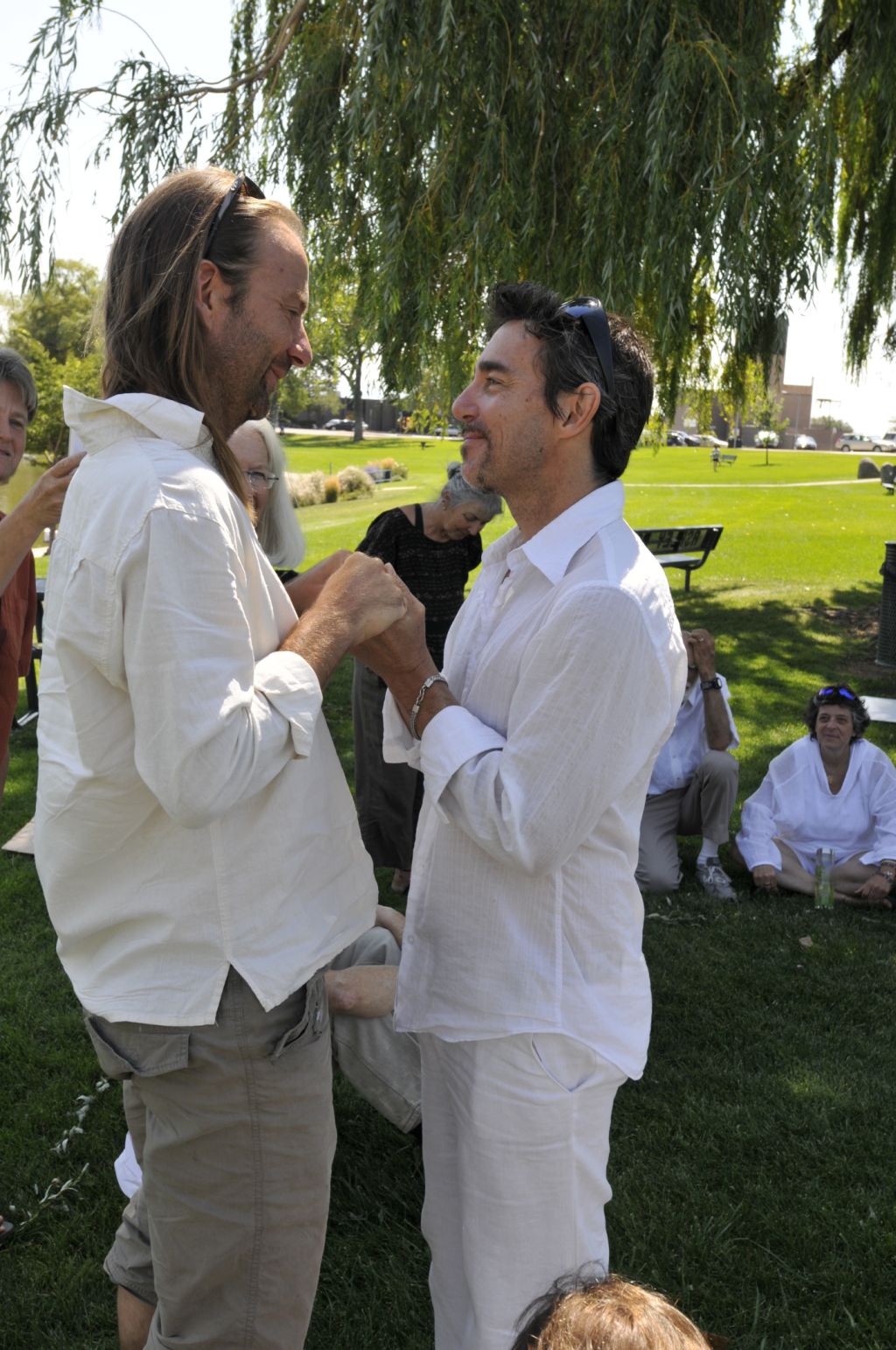 Alaric Balibrera, right, passes the hunger strike effort on to Thomas Jaggers who will strike for a period of days and then pass the effort on to another member of the anti-nuclear protesters group. Photo by Greg Kendall/ladailypost.com