LANL Profile: The Play’s The Thing…

Sheryl Bailey of Los Alamos National Laboratory’s Acquisition Services Management Division Office sits at a table surrounded by actors with diverse personalities. Her soft eyes and captivating smile make her easily approachable, but it is the intensity behind those eyes and smile that will bring together this group of talented actors to produce an appealing and highly charged new play for a Santa Fe theater.

“Ever since I was a little kid I’ve been drawn to the theater,” Bailey said. “Acting, writing, producing and directing—I was captivated by everything it took to create something for the stage.”

After receiving her Bachelor of Fine Arts in Acting/Directing in 1988, Bailey tackled various roles as an actress, but she soon discovered that her true passion was in theatrical direction.

“I really wanted to direct new plays, those that have never been produced before,” she said. “I really like the freedom of directing specifically for the theater, not film or television. There’s just so much freedom in this type of work.”

Having found her focus, Bailey took on various theater-related positions. She served as associate managing artistic director for the Western Stage, staff producer for the Mark Taper Forum, and special events producer at Chaminade College Preparatory. As she acquired experience in theater production and direction, she was invited to serve as guest lecturer at the California Arts Institute and to teach theater arts at Hartnell College and Carmel Ballet.

Bailey came to Los Alamos in the early 2000s because her husband had been hired at the Lab. She quickly settled into the role of stay-home mom.

“Life happens,” she said, “and after my husband and I divorced I found myself looking for a job. I have extensive contract knowledge from my work in theater, and I used this expertise to secure a position at the Lab, originally in Human Resources.”

“It’s fascinating to me that many scientists responsible for some of the biggest breakthroughs all have art in their backgrounds. While science and engineering are definitely important, I think it’s vital also to embrace the arts, including theater. I feel imagination and creativity are keys to scientific discovery.”

In ancient Greece, playwrights typically directed their own plays. The author-director was known as a didaskalos, the Greek word for “teacher.” To this day, one of the roles of a theater director is to instruct actors with the staging of their work. It is the director who breathes life into the playwright’s words and ideas through the actors.

Bailey’s latest directorial effort is “Daphne’s Dive,” written by Pulitzer Prize laureate Quiara Alegría Hudes and produced for Teatro Paraguas in Santa Fe. In a review published in Talkin’ Broadway, Mark Dunn notes that Bailey has a knack for staging effective scenes with actors who can deliver enticing moments—this is a hallmark of a modern didaskalos. Says Dunn in his 2018 review of Daphne’s Dive: “[Sheryl] certainly knows how to make special moments pop and tug at the heartstrings.”

One of Bailey’s biggest passions is new play development, which involves working on stories not previously produced for the stage. Through the years, she has brought to life plays such as “Pigmentation Blues” by Betty K. Bynum through the New York Negro Ensemble, “Baby Jane’s Shangra-La”  by Kira Arné for the Mark Taper Forum and “Time Enough” and “Warm Ashes” through the Los Alamos Theater Project.

“Working to develop these new plays is very exciting because here I have a chance to work with a playwright on setting the ground rules for what the play will look like in the future,” Bailey said. “In our initial meetings and rehearsals, the actors bring substance to their characters individually, but it’s up to me as director to take these individual performances and meld them into one, along with the supporting materials, such as costumes, props, music, sets and whatever else is needed to make the work come alive.”

In 2017, Bailey made her debut in Santa Fe at Teatro Paraguas with “Still in the Game,” a play written by Robert F. Benjamin, a retired Laboratory Fellow and research physicist from Los Alamos.

“This was a play-development piece,” Bailey said. “It was an opportunity to work with Robert from the very beginning. I started by reading the play and offering suggestions about characters and their individual motivations. He then made modifications to the play based on my notes. Early drafts focused on making sure the characters sounded authentic—that they spoke like real people. I needed to make sure that they did not sound like they were mimicking each other—the dialogue needed to reflect different backgrounds and different ages.”

Bailey noted that it is also critical for a director to make a special connection with a playwright’s work.

“For Still in the Game, I found that the principal theme was of death and dying. Having suffered the loss of a loved one after a long fight with cancer, I was able to connect with the material at a very personal level. This connection is what makes it possible for me to bring a play from being a flat set of scripted pages to an authentic and fully realized performance for others to enjoy.” 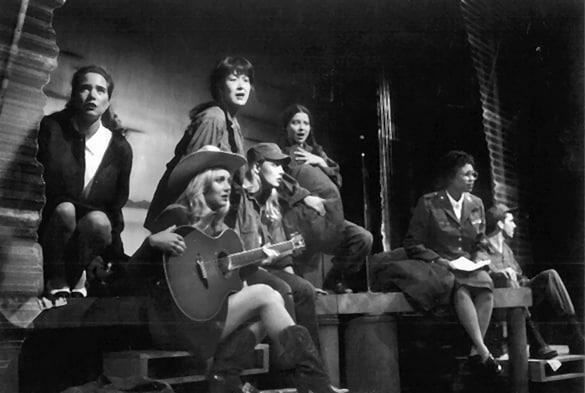 Sheryl Bailey, right, performs in the Western Stage’s production of ‘Piece of My Heart’, a play about the women of the Vietnam War. Courtesy/LANL