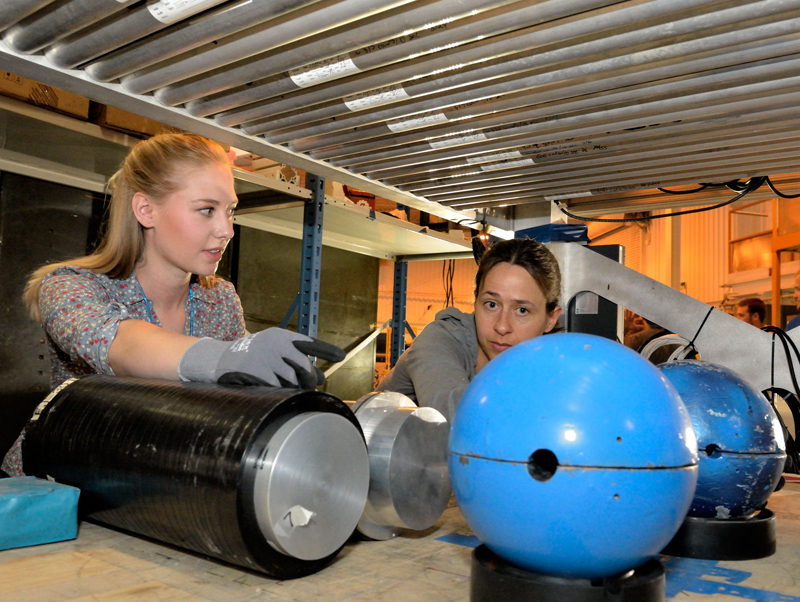 Los Alamos National Laboratory postdoctoral researcher Elena Guardincerri, right, and undergraduate research assistant Shelby Fellows prepare a lead hemisphere inside a muon tomography machine, which can peer inside closed containers and provide detailed images of dense objects such as nuclear materials or other items of interest. The detector, developed at Los Alamos, uses muons — tiny particles generated when cosmic rays interact with Earth’s atmosphere — to do its work, providing a simple, passive system that can be used to thwart nuclear smugglers or look inside the cores of damaged nuclear reactors, such as those at Fukushima Daiichi in Japan. The long tubes above the researchers record incoming muons, while a similar array below the target detects the muons as they penetrate the detector area. Using sophisticated computer software, researchers can determine the type of material penetrated by the naturally-occurring muon shower as well as other information. Courtesy/LANL 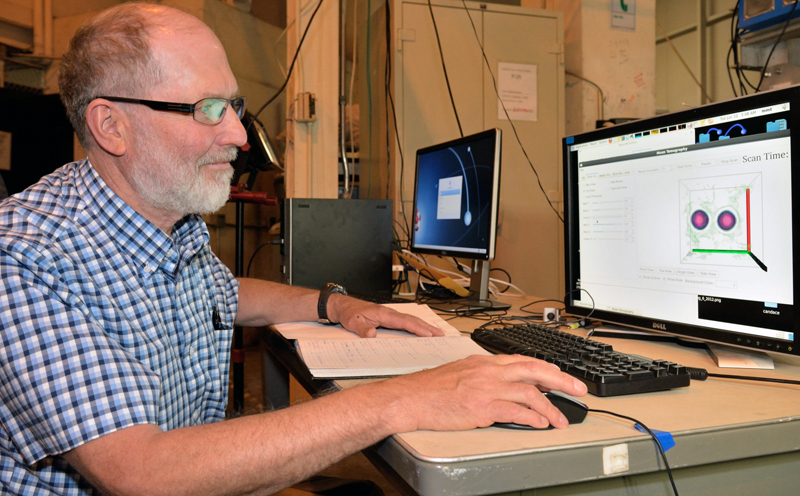 Christopher Morris, leader of Los Alamos National Laboratory’s Muon Tomography Project, watches an image of two dense hemispheres of lead develop on a computer screen after just over a minute of exposure to muons — naturally occurring particles generated with cosmic rays interact with Earth’s atmosphere. Morris and colleagues have developed a method to use muons to peer inside closed containers, even very dense ones, to detect smuggled nuclear materials or to peer inside damaged nuclear reactor cores, like those at the Fukushima Daiichi complex in Japan. Courtesy/LANL

Los Alamos National Laboratory today announced an impending partnership with Toshiba Corporation to use a Los Alamos technique called muon tomography to safely peer inside the cores of the Fukushima Daiichi reactors and create high-resolution images of the damaged nuclear material inside without ever breaching the cores themselves. The initiative could reduce the time required to clean up the disabled complex by at least a decade and greatly reduce radiation exposure to personnel working at the plant.

“Our recent technical work has clearly shown that the muon scattering technique pioneered at Los Alamos provides a superior method for obtaining high-resolution images of nuclear materials inside structures, and this will allow plant operators to establish the condition of reactor-core material without the need to actually get inside,” said Duncan McBranch, Los Alamos’s Chief Technology Officer. “One of the most challenging, time-consuming and potentially dangerous tasks in cleaning up after a reactor accident is determining the condition and location of the core material, especially when the material itself may have melted and flowed to a different part of the building. Invasive techniques such as video endoscopy or introduction of robots run the risk of releasing radiation. Furthermore, those techniques at best offer a partial view of material location. Muon tomography will enable plant operators to see the location of the nuclear material inside, determine its condition, and provide crucial insight that can inform the design of a safer and faster cleanup. We are hopeful that our partnership with Toshiba will assist the Tokyo Electric Power Company and the Japanese government in their efforts to accelerate cleanup operations in the safest way possible.”

Muon radiography (also called cosmic-ray radiography) uses secondary particles generated when cosmic rays collide with upper regions of Earth’s atmosphere to create images of the objects that the particles, called muons, penetrate. The process is analogous to an X-ray image, except muons are produced naturally and do not damage the materials they contact. Muon radiography has been used before in imaginative applications such as mapping the interior of the Great Pyramid at Giza, but Los Alamos’s muon tomography technique represents a vast improvement over earlier technology.

In developing muon tomography, Los Alamos researchers found that by placing a pair of muon detectors in front of and behind an object, and measuring the degree of scatter the muons underwent as they interacted with the materials they penetrated, they could gather detailed images. The method works particularly well with highly interfering materials (so-called “high Z” materials) such as uranium.

Because the muon scattering angle increases with atomic number, core materials within a reactor show up more clearly than the surrounding containment building, plumbing and other objects. Consequently, the Los Alamos muon tomography method shows tremendous promise for pinpointing the exact location of materials within the Fukushima reactor buildings.

“Los Alamos researchers began working on an improved method for muon radiography within weeks of the 2011 earthquake and tsunami that damaged the Fukushima reactor complex,” said Christopher Morris, chief scientist and leader of the Los Alamos Muon Tomography Team. “Within 18 months we had refined our technique and published a paper showing that the Los Alamos method was superior to traditional muon radiography techniques for remotely locating and identifying nuclear materials, and that it could be employed for field use.”

As part of the partnership, Los Alamos will assist Toshiba in developing a Muon Tracker for use at the Fukushima plant.

Los Alamos’s muon tomography technology also has the potential to be deployed in locations around the world to help detect smuggled nuclear materials. In fact, Los Alamos previously granted an exclusive license to Decision Sciences International Corporation for broad commercialization of the Los Alamos technology. The company has successfully deployed portal monitors that use muon tomography at a major seaport for cargo-container scanning as well as at other locations under their licensing agreement.

Muon tomography and development of its application at Fukushima was made possible in part through Los Alamos’ Laboratory-Directed Research and Development Program (LDRD), which uses a small percentage of the Laboratory’s overall budget to invest in new or cutting-edge research. The U.S. Department of Energy supported contacts of the Los Alamos team with other research groups, including several Japanese institutions and the University of Texas.