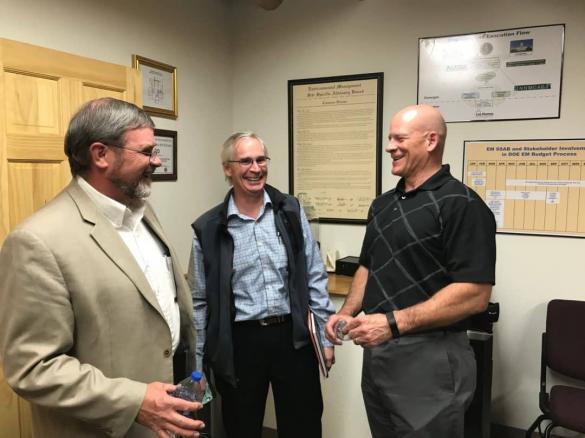 In February 2014, a LANL drum breached underground at the Waste Isolation Pilot Project (WIPP) in Carlsbad. The drum contained nitrate salt waste that was remediated incorrectly with an organic absorbent which was improperly added during repackaging to absorb liquids and to reduce the oxidizing potential of the nitrate salts.

The Accident Investigation Board for the incident identified some 40 judgments of need and identified weaknesses in the areas of process engineering/configuration control, safety and federal oversight.

Erickson and Funk told the NNMCAB members that the essential ingredients for success during the treatment program included having great leaders working as a team, building a strong safety culture in the workplace, having a strong technical basis for treatment, having robust procedures, training and qualification, and strong use of quality control as well as internal and federal oversight.

Examples of a healthy culture seen in observations and interviews described to the NNMCAB subcommittees included sustained line management involved in the field, operational learning being incorporated immediately and the fact that team interaction reflected cohesion, trust and communication.

Treatment of the drums involved removing the waste from the drums and mixing it with water and zeolite to render the waste non-reactive. The resulting mixture is in solid form and repackaged in new drums in accordance with EM-WIPP requirements.

Some of the debris waste proved more difficult to process than anticipated mostly because unexpected materials such as respirator cartridges earmuffs were encountered but also because of consistency of some of the waste, which was harder than expected.