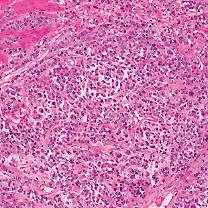 New research at LANL and the Wellcome Trust Sanger Institute shows a molecular fingerprint in stomach cancer that shows it can be treated with platinum drugs and/or molecular inhibitors known as PARP. Courtesy/LANL

New research from a multidisciplinary team shows that a molecular fingerprint, termed “signature 3,” is found in stomach cancer, opening the door to potential treatment with therapies such as platinum drugs.

This finding has the potential to save thousand of lives a year by delivering a more effective, targeted treatment for cancer patients.

Documented in a paper published today in the journal Nature Communications, “A mutational signature in gastric cancer suggests therapeutic strategies,” [Link: http://www.nature.com/ncomms/index.html] the team performed a large-scale computational screen across 36 different tumor types. They confirmed the previously noted presence of signature 3 in breast, ovarian, and pancreatic cancers, but unexpectedly found new evidence for the presence of this same signature in stomach cancer.

“Gastric cancer is the third-most common cause of cancer-related deaths worldwide, and we have potentially identified a new treatment methodology for some of these patients,” said Ludmil Alexandrov, a Los Alamos National Laboratory researcher, corresponding author and principal investigator on the project.  “Overall, this study demonstrates that approximately 30 percent of ovarian cancer, 27 percent of breast cancer, 10 percent of stomach cancers, and 8 percent of pancreatic cancer patients may benefit from targeted therapy with platinum drugs and/or PARP (poly ADP ribose polymerase) molecular inhibitors,” he said.

“This is an extremely exciting finding which shows the importance of genomic sequencing for personalized healthcare in the future,” said Professor Sir Michael Stratton, corresponding author and Director of the Wellcome Trust Sanger Institute. “In years to come, routine genomic analysis of cancers could show which have the signature 3 fingerprint and inform and transform treatment of thousands of patients with these specific breast, ovarian, pancreatic and gastric cancers.”

For a variety of reasons, the genome of cancer cells can exhibit specific mutation types, and that is what the team targeted for exploration. “Exposure to exogenous or endogenous mutagens, abnormal DNA editing, the incomplete fidelity of DNA polymerases, and failure of DNA repair mechanisms can generate distinct combinations of somatic mutation types in cancer genomes,” the team noted.

“We previously termed such patterns ‘mutational signatures’ and developed an approach for extracting mutational signatures from cancer genomes. Our analysis has revealed more than 30 distinct base-substitution signatures across the spectrum of human cancer.” Importantly, previous studies have shown that pancreatic cancers harboring signature 3 are complete responders to platinum therapy.

The results of this study provide the first comprehensive large-scale survey of mutational signature 3 across human cancer. Additional work, involving larger cohorts of samples with carefully curated clinically based information, coupled with detailed histological data and complimented by functional analysis, will be necessary to further elaborate the connection between signature 3 and clinical response in gastric cancer, the researchers noted.