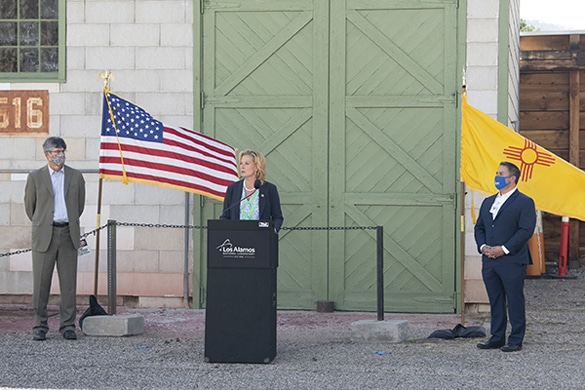 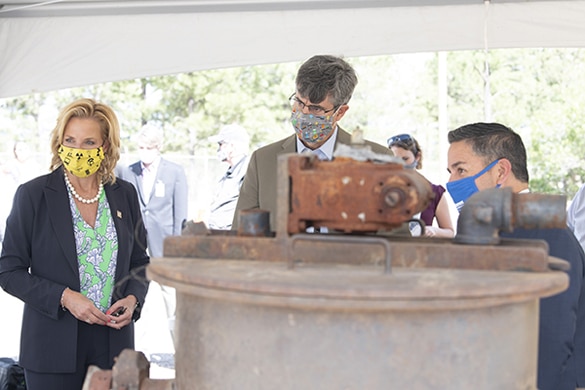 NNSA Administrator Lisa Gordon-Hagerty views artifacts from the Manhattan Project at the historic V-Site at LANL along with Director Thom Mason, center, and Rep. Ben Ray Luján. V-Site consisted of a cluster of wooden buildings built in January 1944 as a high explosives handling and assembly facility. Courtesy/LANL

To mark the 75th anniversary of the testing of the nuclear bomb, known as the Trinity test, Los Alamos National Laboratory (LANL) officials along with representatives from the National Nuclear Security Administration (NNSA) gathered at V-Site located in the LANL campus Thursday afternoon to honor the milestone that led to the end of World War II.

V-Site was a fitting venue. Before the “Gadget” or the prototype of the nuclear bomb “Little Boy,” exploded in the Alamogordo desert July 16, 1945, it was pre-assembled and had some early testing done at V-Site.

LANL Director Thom Mason and U.S. Under Secretary of Energy for NNSA Lisa Gordon-Hagerty spoke during the event, which was also attended by U.S. Rep. Ben Ray Lujàn, although he did not make a presentation.

Mason described what happened in the Alamogordo desert as “momentous” for not only Los Alamos but for the U.S. and the world.

While only a few individuals were admitted into V-Site due to COVID-19, Mason said the public could participate in honoring and recognizing the enormous scientific milestone that occurred 75 years ago by visiting www.lanl.gov. The website features testimonies, videos, articles and photographs of the Trinity test.

“Everyone can participate in the recognition because it is online,” he said.

During her speech, Gordon-Hagerty said she couldn’t recapture the “magnificence of the moment” that occurred 75 years ago in Alamogordo.

However, to give participants a picture of this moment in history, the Bradbury Science Museum as well as the LANL Research Center provided artifacts from the Manhattan Project area to be displayed for the event. These included J. Robert Openheimer’s desk chair, drawings of the nuclear bombs’ designs and even a life-size model of the nuclear bomb known as “Fat Man”.

“Hopefully they provide you with a sense of connectivity to the past,” Gordon-Hagerty said of the artifacts. “While I stand here today speaking about an event that occurred 75 years ago, and perhaps seemingly neglect so many of the incredible achievements of Los Alamos and the rest of our nuclear security enterprise this afternoon, I do not hesitate for a moment to acknowledge that every single person, no matter their position, contributed to the end of WW2 and those serving our great nation to this day, deserve special recognition for keeping us safe and secure which is why we are the land of the free and home of the brave.”

“Los Alamos has applied its expertise in nuclear sciences in other important ways well-outside national security,” Gordon-Hagerty said. “Millions of people are affected by illnesses such as heart disease and cancer, whether directly themselves, or indirectly by the shattering consequences upon loved ones. Let us make it our goal to keep the world safe for the next 75 years by fully using the tools from the past, present and those we have yet to dream of.”