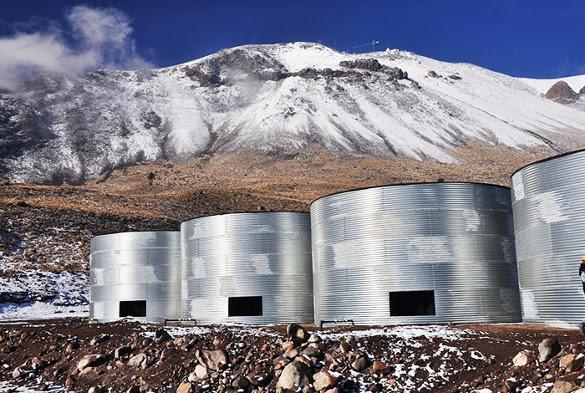 The High Altitude Water Cherenkov (HAWC) Gamma-Ray Observatory, 13,500 feet above sea level on the slopes of Mexico’s Volcán Sierra Negra. Courtesy/LANL
LANL News:
The first-ever detection of highly energetic radiation from a microquasar has astrophysicists scrambling for new theories to explain the extreme particle acceleration.
A microquasar is a black hole that gobbles up debris from a nearby companion star and blasts out powerful jets of material.
“What’s amazing about this discovery is that all current particle acceleration theories have difficulties explaining the observations,” said Hui Li, a theorist in Los Alamos National Laboratory’s Theoretical Division who served on the team. “This surely calls for new ideas on particle acceleration in microquasars and black hole systems in general.”
The team’s observations, described in the Oct. 4 issue of the journal Nature, strongly suggest that particle collisions at the ends of the microquasar’s jets produced the powerful gamma rays. Scientists think that studying messages from this microquasar, dubbed SS 433, may offer a glimpse into more extreme events happening at the centers of distant galaxies.
The team gathered data from the High-Altitude Water Cherenkov Gamma-Ray Observatory (HAWC), which is a mountain-top detector in Mexico that observes gamma ray emission from supernova remnants, rotating dense stars called pulsars, and quasars. Los Alamos, funded by Department of Energy Office of High-Energy Physics, helped build HAWC, which was completed in 2015.
Now, the team has studied one of the most well-known microquasars, which is about 15,000 light years away.
Quasars are massive black holes that suck in material from the centers of galaxies, rather than feeding on a single star. They actively emit radiation visible across the universe. But most are so far away that the majority of the detected quasars must have their jets aimed at Earth, making them easier to spot, like looking directly into a flashlight. In contrast, SS 433’s jets are oriented away from Earth, which makes them more difficult to observe. However, HAWC was able to detect similarly energetic light when viewed from the side, allowing the full length of the jet to be visible.”
“The new findings improve our understanding of particle acceleration in jets of microquasars, which also sheds light on jet physics in much larger and more powerful extragalactic jets in quasars,” said Hao Zhao, of Los Alamos National Laboratory’s Physics Division.
HAWC, located roughly 13,500 feet above sea level near the Sierra Negra volcano in Mexico, catches the fast-moving rain of particles with a detector composed of more than 300 tanks of water, each about 24 feet in diameter. When the particles strike the water, they produce a shock wave of blue light, called Cherenkov radiation. Cameras in the tanks detect this light, allowing scientists to compile the origin story of the gamma rays.
The HAWC collaboration examined data taken from more than 1,017 days of observation and saw evidence that gamma rays were coming from the ends of the microquasar’s jets, rather than the central part of the star system. Based on their analysis, the researchers concluded that electrons in the jets attain energies that are about 1,000 times higher than can be achieved using earth-bound particle accelerators, such as the Large Hadron Collider. The jet electrons collide with the low-energy microwave background radiation that permeates space, resulting in gamma ray emission. This is a newly observed mechanism for getting high-energy gamma rays out of this kind of system and is different from what scientists have observed when the jets are aimed at earth.
Until now, instruments have not seen such detailed information about SS 433 because, according to the existing sky maps, this microquasar is tucked up into a bright supernova remnant that also emits gamma rays. But HAWC’s wide field of view and long baseline looks at the whole sky every night. This feature enabled the detector, analogous to a camera with a long exposure and wide-angle lens, to resolve the microquasar’s distinct features, even though it is obscured by the surroundings.
Publication reference:
“Very high energy particle acceleration powered by the jets of the microquasar SS 433,” Nature (2018), DOI: https://doi.org/10.1038/s41586-018-0565-5.
Funding:
This work was supported by: the US National Science Foundation; the US Department of Energy Office of High-Energy Physics; the Laboratory Directed Research and Development program of Los Alamos National Laboratory; and Consejo Nacional de Ciencia y Tecnología, México.
About the Collaboration
The HAWC collaboration is funded by the US National Science Foundation (NSF); the US Department of Energy Ofﬁce of High-Energy Physics; the Laboratory Directed Research and Development program of Los Alamos National Laboratory; Consejo Nacional de Ciencia y Tecnología, México (grants 271051, 232656, 260378, 179588, 239762, 254964, 271737, 258865, 243290, 132197, and 281653) (Cátedras 873, 1563); Laboratorio Nacional HAWC de rayos gamma; L’OREAL Fellowship for Women in Science 2014; Red HAWC, México; DGAPA-UNAM (Dirección General Asuntos del Personal Académico-Universidad Nacional Autónoma de México; grants IG100317, IN111315, IN111716-3, IA102715, 109916, IA102917); VIEP-BUAP (Vicerrectoría de Investigación y Estudios de Posgrado-Benemérita Universidad Autónoma de Puebla); PIFI (Programa Integral de Fortalecimiento Institucional) 2012 and 2013; PRO-FOCIE (Programa de Fortalecimiento de la Calidad en Instituciones Educativas) 2014 and 2015; the University of Wisconsin Alumni Research Foundation; the Institute of Geophysics, Planetary Physics, and Signatures at Los Alamos National Laboratory; Polish Science Centre grant DEC-2014/13/B/ST9/945 and DEC-2017/27/B/ST9/02272; and Coordinación de la Investigación Cientíﬁca de la Universidad Michoacana. The content of this article does not necessarily reflect the views of these organizations.
Menu
Los Alamos
66°
Fair
5:48am8:24pm MDT
Feels like: 66°F
Wind: 8mph SW
Humidity: 32%
Pressure: 30.26"Hg
UV index: 0
SatSunMon
86/63°F
88/64°F
86/59°F
Weather forecast Los Alamos, New Mexico ▸