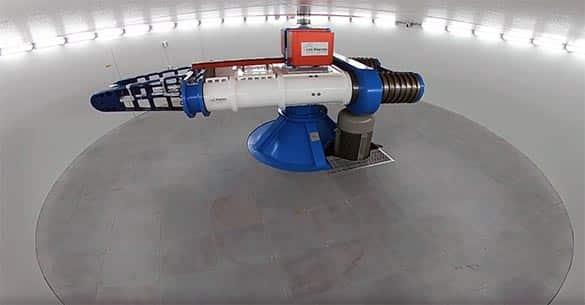 “The telemetry unit was designed and manufactured by Los Alamos’ Intelligence and Space Research Division,” Telemetry Program Manager Myles Fitzgerald said. “Telemetry is a data stream of information on temperature, acceleration, vibration, strain, all the conditions a system encounters during a test flight.”

Because a test missile flight ultimately ends with the test system completely destroyed, telemetry data from the flight must be collected by receiving stations along the flight path.

“The purpose of the centrifuge test is to subject the electronics to a high gravitational load (G-load) that’s representative of what the system will experience when re-entering the Earth’s atmosphere,” weapons test engineer Alex Cusick said.

You can see the centrifuge in action on the Laboratory’s YouTube Channel (https://youtu.be/gZ1e_N63W7E).

The development of the telemetry unit and its testing is a partnership between Space Electronics and Signal Processing (ISR-4) and Weapons Test Engineering (Q-14) and is a core mission program at Los Alamos.

The centrifuge is used to spin test articles at speeds faster than a full-throttle NASCAR racing vehicle, as high as 200 times the force of Earth’s gravity. A wide variety of sensors on the test articles record the effects on various components at high G-load to better understand the stresses of launch and re-entry.

What’s new and unique about this device is that it’s the first centrifuge facility that is capable of testing systems that include significant quantities of high-explosives.

The goal of this particular test is to put a very large gravitational force on the telemetry unit, greater than 100G, to confirm that it continuously and reliably transmits accurate data during the re-entry phase of the launch to target sequence.

“It’s one of many tests we run,” Fitzgerald said. “We do vacuum tests, thermal cycling, vibration, and shock loading, and all these tests can be thought of as testing to extremes. The centrifuge is of course the most dramatic, it’s fast, it’s loud, it’s visually interesting. To see the centrifuge in operation gives you much more a sense of the stresses that are seen throughout flight.”

The Laboratory has a long history of developing and delivering instruments, sensors, diagnostics, and power systems for space flight. A couple of the more famous systems include the VELA satellites that revolutionized nuclear treaty verification in the 1960s and the ChemCam laser spectroscopy system currently on the Mars Curiosity rover.