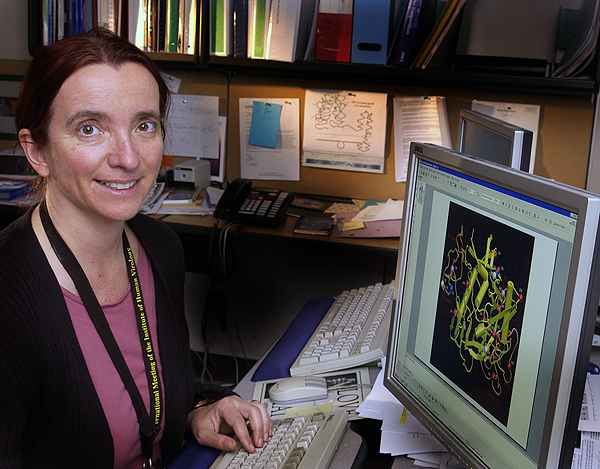 Bette Korber of Los Alamos National Laboratory, who developed a component of a new vaccine against HIV, now being tested in monkeys. Courtesy/LANL

The considerable diversity of HIV worldwide represents a critical challenge for designing an effective HIV vaccine. Now, it appears that that a vaccine bioinformatically optimized for immunologic coverage of global HIV diversity, called a mosaic vaccine and designed by Bette Korber and her team at Los Alamos National Laboratory, may confer protection from infection.

“This is the first time the mosaic antigen inserts were used in a challenge study. In a challenge study, vaccine-elicited protection from infection is tested, versus testing a vaccine for its ability to stimulate good immune responses,” says Bette Korber of Los Alamos.

These vaccines are specifically designed to present the most common forms of parts of the virus that can be recognized by the immune system. This new insight regarding a mosaic vaccine’s ability to protect from infection is the result of work by a scientific team led by Beth Israel Deaconess Medical Center (BIDMC), and including Los Alamos researchers. The study, which was conducted in monkeys, is newly published in the journal Cell.

“To our knowledge, this study represents the first evaluation of the protective efficacy of a candidate global HIV antigen strategy in nonhuman primates,” says lead author Dan H. Barouch, MD, PhD, the director of the Center for Virology and Vaccine Research at BIDMC and professor of medicine at Harvard Medical School. “In this study, we show for the first time that bioinformatically optimized HIV vaccine antigens can afford partial protection in rhesus monkeys against challenges with a stringent simian-human immunodeficiency virus.”

Barouch and his team studied the immunogenicity of HIV mosaic Env/Gag/Pol antigens administered to monkeys using viral vectors. (Env, Gag, and Pol are three major HIV proteins that help viruses “bind to” or enter host cells and infect them.) Mosaic proteins resemble these natural proteins, therefore increasing efficacy against the HIV diversity. After immunization, the monkeys were repetitively exposed to a simian-human immunodeficiency virus that carried the human Env (envelope, or binding) protein, and the investigators evaluated the ability of the vaccines to block infection by repeatedly exposing the vaccinated animals to the virus.

Although most animals immunized with the mosaic HIV vaccine became infected by the end of the study, the researchers observed an 87 to 90 percent reduction in monkeys’ probability of becoming infected each time they were exposed to the virus. In contrast, monkeys that received sham vaccines became infected quickly.

“These findings indicate that these optimized vaccine antigens can afford partial protection in a stringent animal model,” says Barouch.

The investigators found that the immunized monkeys mounted antibody responses against diverse strains of HIV noting, “Protection was dependent on several different types of antibody responses, suggesting that the coordinated activity of multiple antibody functions may contribute to protection against difficult-to-neutralize viruses.” The monkeys also mounted cellular immune responses to multiple regions of the virus.

The researchers note that most previous HIV vaccine candidates have typically only been tested for protection against easy-to-neutralize viruses rather than against a difficult-to-neutralize virus like the one used in this study. Also, the viral challenge in the study was approximately 100-fold more infectious than typical sexual HIV exposures in humans.

“These data suggest a path forward for the development of a global HIV vaccine and give us hope that such a vaccine might indeed be possible,” said Barouch. “We are planning to advance this HIV vaccine candidate into clinical trials next year,” he adds.

This work was supported by the U.S. Military Research and Material Command and the U.S. Military HIV Research Program; the National Institutes of Health; the NIAID Division of Intramural Research; the Ragon Institute of MGH, MIT, and Harvard; and the Bill and Melinda Gates Foundation.

Beth Israel Deaconess Medical Center is a patient care, teaching and research affiliate of Harvard Medical School and currently ranks third in National Institutes of Health funding among independent hospitals nationwide. BIDMC is clinically affiliated with the Joslin Diabetes Center and is a research partner of the Dana-Farber/Harvard Cancer Center. BIDMC is the official hospital of the Boston Red Sox. For more information, visit www.bidmc.org.