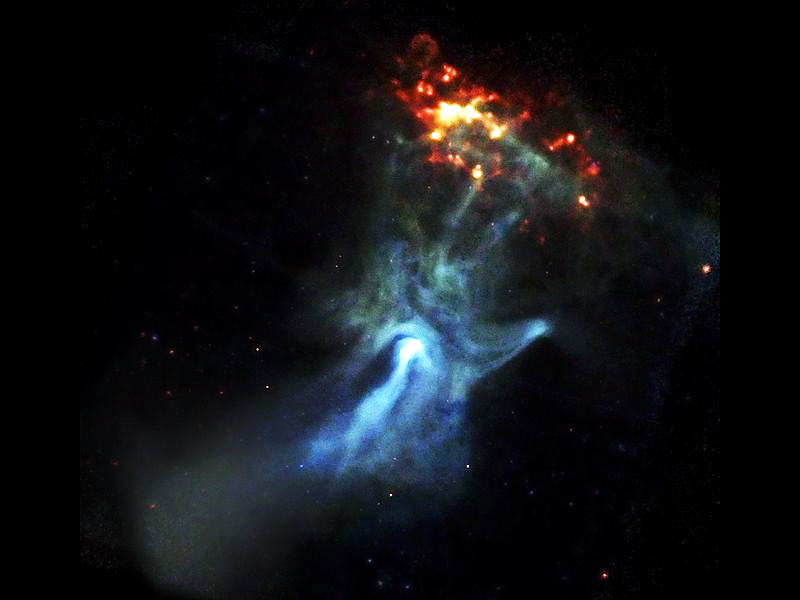 Massive X-ray superbursts near the surface of neutron stars are providing a unique window into the operation of fundamental forces of nature under extreme conditions.

“Scientists are intrigued by what exactly powers these massive explosions, and understanding this would yield important insights about the fundamental forces in nature, especially on the astronomical/cosmological scale,” said Peter Moller of Los Alamos National Laboratory’s Theoretical Division.

A neutron star is created during the death of a giant star more massive than the sun, compressed to a tiny size but with gravitational fields exceeded only by those of black holes. And in the intense, neutron-rich environment, nuclear reactions cause strong explosions that manifest themselves as X-ray bursts and the X-ray superbursts that are more rare and 1000 times more powerful.

Los Alamos researchers and former postdocs contributed to the paper “Strong neutrino cooling by cycles of electron capture and beta decay in neutron star crusts” that was published in Nature’s online edition of Dec. 1, 2013. (http://www.nature.com/nature/journal/vaop/ncurrent/abs/nature12757.html)

The importance of discovering an unknown energy source of titanic magnitude in the outermost layers of accreting neutron star surfaces is heightened by the unresolved issue of neutrino masses, the recent discovery of the Higgs boson and the fact that highly-neutron-rich nuclei with low-lying states enable “Weak Interactions,” prominent in stellar explosions. (The weak nuclear force is one of four fundamental sources, such as gravity, which interacts with the neutrinos; it is responsible for some types of radioactive decay.)

These hitherto celestially operative nuclei are expected to be within the experimental reach of the Facility for Rare Isotope Beams (FRIB), a proposed user facility at Michigan State University funded by the U.S. Department of Energy Office of Science.

“The terrestrial experimental study of Weak Interactions in highly deformed, neutron-rich nuclei that FRIB can potentially provide is lent support by this ground-breaking Nature letter, since Los Alamos has been one of the few homes to theoretical studies of deformed nuclei and their role in astrophysics, and remains so to this day,” said Moller, who coauthored the paper with a multidisciplinary team including former Los Alamos postdoctoral researchers Sanjib Gupta, now a faculty member at the Indian Institute of Technology (IIT), Ropar and Andrew Steiner, now a research assistant professor at INT, Seattle.

Previously a common assumption was that that the energy released in these radioactive decays would power the X-ray superburst explosions. This was based on simple models of nuclear beta-decay, sometimes postulating the same decay properties for all nuclei. It turns out, however, that it is of crucial importance to develop computer models that realistically describe the shape of each individual nuclide since they are not all spherical.

At Los Alamos scientists have carried out detailed calculations of the specific, individual beta-decay properties of thousands of nuclides, all with different decay properties, and created databases with these calculated properties.

The databases are then used at MSU as input into models that trace the decay pathways with the passage of time in accreting neutron stars and compute the total energy that is released in these reactions.

The new, unexpected result is that so much energy escapes by neutrino emission that the remaining energy released in the beta decays is not sufficient to ignite the X-ray superbursts that are observed. Thus the superbursts’ origin has now become a puzzle.

Solving the puzzle will require that we calculate in detail the consequences of shapes of neutron-rich nuclei, the authors said, and it requires that they simultaneously analyze the role played by neutrinos in neutron star X-ray bursts whose energetic magnitudes are exceeded only by explosions in the nova/supernova class.

The strong nuclear deformations that formed the basis for the neutrino cooling in neutron star crusts also play a role in a number of astrophysical settings, and have been taken into account in studies of supernovae explosions and subsequent collapses, funded by Los Alamos’ Laboratory Directed Research and Development (LDRD) programs.

The large databases compiled by use of these and other nuclear-structure models are also used in several other Los Alamos programs. For example in modeling nuclear-reactor behavior, researchers have had to take into account beta-decay both because delayed neutrons are emitted, which governs the criticality of the reactor, and because it generates heat, just as in the neutron star.

Another current application is in nuclear non-proliferation programs. One method for detecting clandestine nuclear material in cargo shipments is to bombard cargoes with a small number of neutrons. If emission of delayed neutrons is detected after neutron bombardment, scientists have a sure signature of fissile nuclear material. The theoretical databases compiled at Los Alamos are not just used internally but are also part of nuclear-structure databases maintained by the International Atomic Energy Agency.

The authors, an international team