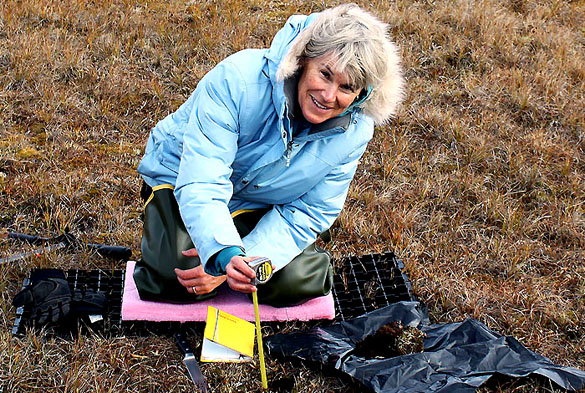 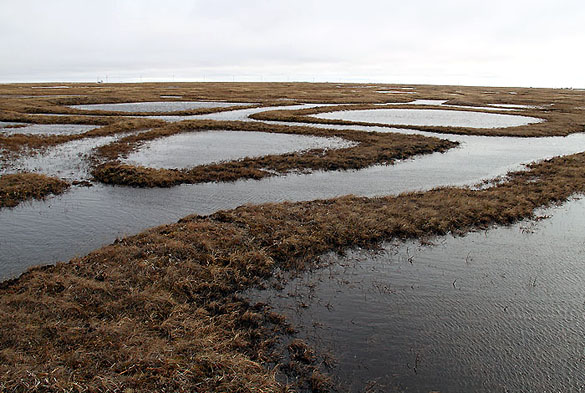 Ice wedge polygons impound snowmelt runoff at the DOE Next Generation Ecosystem Experiment field site near Barrow, Alaska. Thousands of square miles in the Arctic are covered by an interconnected network of ponds in polygon-shaped formations. Recent research reveals rapid and widespread degradation and melting. Courtesy/LANL

Permafrost covers a considerable part of the Arctic. Hundreds of meters deep in many places and frozen for millennia, it’s been thawing in recent decades, releasing greenhouse gases. New research reveals that similarly ancient ice wedges that form the prevalent honeycomb pattern across the tundra appear to be melting rapidly across the Arctic.

The ice wedges are quickly degrading, affecting runoff and amplifying the loss of permafrost. This melting ground ice greatly affects the storage and movement of water, either creating small ponds that absorb heat and increase thawing of soil across the tundra, or causing new connections between polygon troughs that can drain the landscape, according to a new study (http://www.nature.com/ngeo/journal/vaop/ncurrent/full/ngeo2674.html) published today in the journal Nature Geoscience.

Ice wedge degradation has been observed before, but this is the first study to determine that rapid melting of ground ice has become widespread throughout the Arctic. The research team predicts that the melting—already occurring at sub-decadal timescales—will expand and intensify across the region, and this could escalate global warming and create more feedbacks.

“The unique structure of ice wedge polygon landscapes promotes ponding of water and the accumulation of vast stores of soil carbon as wetland vegetation dies-off seasonally and is buried and frozen over thousands of years. When ice wedges melt the land surface collapses. These “thermokarsts” dramatically change hydrology by either creating a lot of new ponds, or by draining and drying polygon-shaped ponds by connecting them into a continuous drainage network.” said Cathy Wilson, the Los Alamos National Laboratory geomorphologist who coauthored the paper. Wilson heads the Atmosphere, Climate and Ecosystem Science team in the Earth and Environmental Sciences Division.

Nearly 24 percent of the Northern continental landmass is covered by permafrost, defined as continuously frozen ground for two-plus years, with most of it frozen for tens to hundreds of thousands of years. Permafrost stores nearly 1700 gigatons of organic carbon. This frozen carbon is far greater than the amount of carbon that is already in the atmosphere in the form of greenhouse gases: methane and carbon dioxide. Wilson and other Los Alamos scientists have been working to understand how changes in permafrost hydrology might severely alter the Arctic carbon cycle, including the possibility of a large-scale greenhouse gas release from thawing permafrost.

Wilson explained “When permafrost thaws, microbes get active and start decomposing the carbon in the soil. This generates greenhouse gases. We want to know how much gas will be produced, how fast it will be released from the soil, and if it will be methane or carbon dioxide. Hydrology is critical, because more thermokarst ponds results in more methane, but more drained land results in more carbon dioxide.”

The international team combined observations about the types of ice wedge polygons and how they changed over time across the Arctic, where they were already performing various permafrost studies. According to the paper, although these regions contain “cold permafrost,” with an overall average temperature of about minus-14 degrees Celsius, surface thawing still occurred at all of the 10 study sites across Alaska, Canada and Russia.

“It’s really the tipping point for the hydrology,” said Anna Liljedahl, a researcher from the University of Alaska Fairbanks and the paper’s lead author. “Suddenly you’re draining the landscape and creating more runoff even if the amount of precipitation remains the same. Instead of being absorbed by the tundra, the snowmelt water will run off into lakes and larger rivers. It really is a dramatic hydrologic change across the tundra landscape.”

Gradual warming of permafrost has been well-documented in the Arctic, but the polygon study indicates that a brief period of unusual warmth can cause a rapid shift in a short time period.

At the studied sites, ice wedge degradation occurred in less than a decade. In some cases, a single unusually warm summer was enough to cause over 10 centimeters of surface subsidence.

The team’s synthesis of field observations, remote sensing and hydrologic modeling documents trough formation (from melt and subsequent water movement) across the Arctic continuous permafrost domain. The ice-wedge degradation is a recent widespread phenomenon with major hydrological implications, according to the authors.

“Change is happening so fast. I never thought I’d see thermokarst occur over the course of a few years at our field site. It’s pretty exciting, but scary too.” Wilson said. “Even though the goal of the Los Alamos research is to improve the representation of permafrost hydrology in coupled climate models, I hope these findings will immediately help the general public and policy makers understand just how vulnerable the Arctic is to climate change.”

This research is funded by Department of Energy’s Office Science (Office of Biological and Environmental Research, Next-Generation Ecosystem Experiments, NGEE-Arctic).