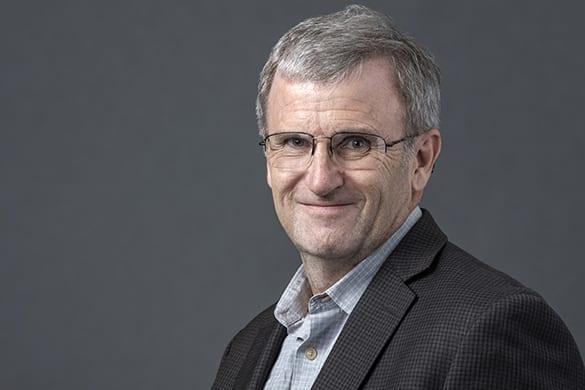 Los Alamos National Laboratory has named George “Andy” Erickson a senior fellow, one of only six senior fellows currently at the Laboratory. Erickson is an expert in emerging threats and serves as the Laboratory’s deputy principal associate director of Global Security and senior intelligence executive.

“I have known and worked with Andy for many years now,” said Laboratory Director Terry C. Wallace, Jr., who was principal associate director of Global Security prior to being named director. “He embodies the principles of honor, integrity, and service that define the mission of the Laboratory. Much of his work will never be known to the broader world, but has fundamentally improved national security. His boundless energy, dedication, and creativity when it comes to problem solving are invaluable.”

The designation of senior fellow is bestowed on staff for extraordinary service to the Laboratory and the nation. Often their contributions are invisible to the outside world, either because their contributions are classified or the service is not easily measured by metrics such as peer-reviewed publications or selection by scientific and engineering societies for honors.

Nancy Jo Nicholas, principal associate director of Global Security, said, “Andy excels at recognizing and fostering curiosity for innovative possibilities far beyond conventional practice. He is truly a strategic thinker in the area of emerging threats and is a recognized and respected leader within the Laboratory, the tri-lab enterprise (with Livermore National Laboratory and Sandia National Laboratories), the Department of Energy, and the Intelligence Community.”

Working with his counterparts at Livermore and Sandia, Erickson led the effort to build a new and enduring DOE program with stable funding that tapped tri-lab capabilities to provide the most advanced technical intelligence assessment of foreign nuclear weapons. The Foreign Nuclear Weapons Intelligence Initiative formalized the Laboratories’ relationship with the intelligence community for complex foreign nuclear weapons assessments, enabling coordinated planning for experimental verification and computational analysis of intelligence.

“An added benefit of Andy’s involvement was, and continues to be, his uncanny ability to promote and gain interagency support for technologies suitable to the task of addressing evolving needs such as noncompliance verification,” Nicholas said.

“The success of Andy’s efforts contributes directly to the strategic objectives of the Laboratory, supporting stockpile stewardship, nuclear nonproliferation, and counter-proliferation—the thrusts of our strategic deterrence mission,” Wallace said. “Andy not only enthusiastically provides outstanding technical expertise and leadership, but also demonstrates exceptional political savvy, professional conduct, and above all, personal integrity. This is precisely the kind of leadership upon which the Laboratory has built its reputation for public service for more than 75 years and why it is appropriate to name him a senior fellow.”