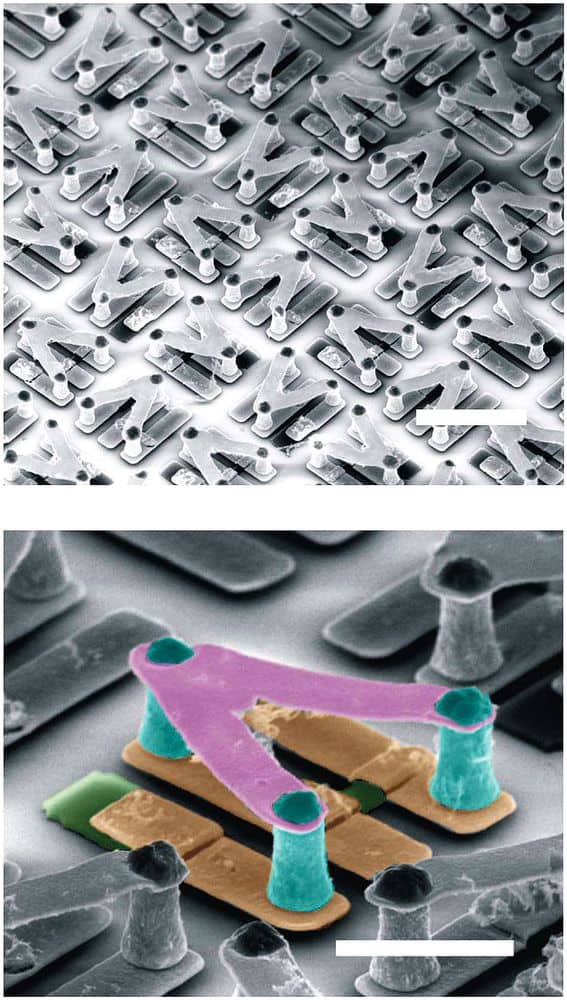 A multi-institutional team of researchers including scientists with Los Alamos National Laboratory has created the first artificial molecules whose chirality can be rapidly switched from a right-handed to a left-handed orientation with a beam of light on them.

Switchable molecules hold potentially huge possibilities for the application of terahertz technologies across a wide range of fields, including biomedical research, homeland security and ultrahigh-speed communications.

Chirality is the distinct left/right orientation or “handedness” of some types of molecules, meaning the molecule can take one of two mirror image forms.

The right-handed and left-handed forms of such molecules, called “enantiomers,” can exhibit strikingly different properties.

For example, one enantiomer of the chiral molecule limonene smells of lemon, the other smells of orange.

The ability to observe or even switch the chirality of molecules using terahertz (trillion-cycles-per-second) electromagnetic radiation is a much-coveted asset in the world of high technology.

“Natural materials can be induced to change their chirality but the process, which involves structural changes to the material, is weak and slow. With our artificial molecules, we’ve demonstrated strong dynamic chirality switching at light-speed,” says Xiang Zhang, one of the leaders of this research and a principal investigator with Berkeley Lab’s Materials Sciences Division.

Antoinette Taylor of Los Alamos and her co-authors say that the general design principle of their optically switchable chiral THz metamolecules is not limited to handedness switching but could also be applied to the dynamic reversing of other electromagnetic properties.

Working with terahertz (THz) metamaterials engineered from nanometer-sized gold strips with air as the dielectric, the team fashioned a delicate artificial chiral molecule that they then incorporated with a photoactive silicon medium.

Through photoexcitation of their metamolecules with an external beam of light, the researchers observed handedness flipping in the form of circularly polarized emitted THz light. Furthermore, the photoexcitation enabled this chirality flipping and the circular polarization of THz light to be dynamically controlled.

“In contrast to previous demonstrations where chirality was merely switched on or off in metamaterials using photoelectric stimulation, we used an optical switch to actually reverse the chirality of our THz metamolecules,” Zhang says.

The other corresponding authors are Shuang Zhang of the University of Birmingham in the United Kingdom, and Antoinette Taylor of DOE’s Los Alamos National Laboratory.

The optically switchable chiral THz metamolecules consisted of a pair of 3D meta-atoms of opposite chirality made from precisely structured gold strips. Each meta-atom serves as a resonator with a coupling between electric and magnetic responses that produces strong chirality and large circular dichroism at the resonance frequency.

Silicon pads were introduced to each chiral meta-atom in the metamolecule but at different locations.

The silicon pads broke the mirror symmetry and induced chirality for the combined metamolecule. The pads also functioned as the optoelectronic switches that flipped the chirality of the metamolecule under photoexcitation.

“Our scheme relies on the combination of two meta-atoms with opposite properties, in which one is functional while the other is inactive within the frequency range of interest,” says corresponding author Shuang Zhang. “ With suitable design, the two meta-atoms respond oppositely to an external stimulus, that is, the inactive one becomes functional and vice versa.”

THz electromagnetic radiation – also known as T-rays – falls within the frequency range of molecular vibrations, making it an ideal none-invasive tool for analyzing the chemical constituents of organic and non-organic materials.

Being able to flip the handedness of chiral metamolecules and control the circular polarization of THz light could be used to detect toxic and explosive chemicals, or for wireless communication and high-speed data processing systems.

Most biological molecules are chiral, including DNA, RNA and proteins, so THz-based polarimetric devices should also benefit medical researchers and developers of pharmaceutical drugs among others.

“The switchable chirality we can engineer into our metamaterials provides a viable approach towards creating high performance polarimetric devices that are largely not available at terahertz frequencies,” says corresponding author Antoinette Taylor. “This frequency range is particularly interesting because it uniquely reveals information about physical phenomena such as the interactions between or within biologically relevant molecules. It may enable control of electronic states in novel material systems, such as cyclotron resonances in graphene and topological insulators.”

This research was primarily supported by the DOE Office of Science.