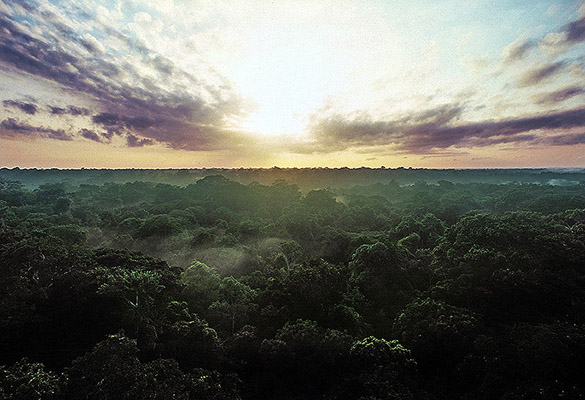 Overhead view of Amazon forest, at risk from a warming climate. Photo by Hugo Glendinning

Tropical forests play a major role in the planet’s carbon cycle, but there are large uncertainties over how they will respond over the next 100 years as the planet’s climate warms.

An expansive new project called Next Generation Ecosystem Experiments-Tropics, or NGEE-Tropics, aims to bring the future of tropical forests into much clearer focus.

“Los Alamos National Laboratory scientists are playing a major role in the project, specifically in relation to quantifying, understanding, and modeling drought impacts on tropical forests, and improving the next-generation of models” said scientist Nate McDowell, project leader of the Los Alamos components.

The project’s goal is the development of a model that represents how tropical forests interact with Earth’s climate in much greater ecological detail than ever before. This will help scientists explore, more accurately than is possible today, how rising temperatures, shifting precipitation patterns, increasing greenhouse gas levels, and other natural and human-induced changes affect tropical forests’ influence on Earth’s climate.

Scientists know less about the flux of carbon, water, and energy between tropical forests and the atmosphere than about most other biomes. These processes are also poorly represented in climate models. Because of this, tropical forests are among the biggest sources of terrestrial uncertainty in projections of Earth’s future climate. NGEE-Tropics plans to dramatically reduce this uncertainty and thus improve future climate projections.

“One of the biggest identified threats to the pan-tropical carbon sink is drought-induced reductions in forests’ ability to acquire and use water to capture CO2, which during severe drought can cause forest mortality,” McDowell said.

“Both observational and modeling evidence are strongly supporting that the pan-tropical forest carbon storage from the atmosphere (the carbon sink) may already be declining in response to climate change-induced reductions in precipitation and increases in temperature.”

Because of Los Alamos’ international leadership in the study of drought-induced mortality, its scientists are leading the sub-component of NGEE-Tropics focused on quantifying, understanding, and modeling historical and future drought-impacts on pan-tropical forest stress and death. With Los Alamos’ strengths in both empirical (measurement) and modeling science, Los Alamos’ connection with this project is a strong one, McDowell said.

“In addition to improving our fundamental understanding of the processes that control the pan-tropical carbon sink,” McDowell said. “Los Alamos is providing model uncertainty quantification to identify and subsequently improve existing model weaknesses.

“Furthermore, LANL’s strong modeling skills are being employed to develop the next generation of a multi-physics modeling framework that allows models to become more flexible so that researchers may develop, test, and evaluate model components with greater fidelity.”

During the first phase of the project, which spans the next three years, scientists will assess what’s known about tropical forest ecosystems and how well these processes are represented in models. Several pilot field studies will also be developed in phase one that link modeling advances with field observations.

The scientists will apply the lessons from these pilot studies to the field studies that will start in phase two and continue into phase three. During the third and final phase, NGEE-Tropics researchers will also explore interactions between tropical forests and the climate system by using their new tropical forest model fully coupled in an Earth system model.

Ultimately, the developments in modeling and understanding achieved by NGEE-Tropics will become a foundational component of both the process-rich model that NGEE-Tropics will develop and the coarse-scale Earth system model that is an ultimate product of the project, said McDowell.

“The modeling developments are critical to the success of NGEE-Tropics because of both the understanding, and the modeling skill, that feed into the ultimate goal of NGEE-Tropics: That is to develop a model that can predict with high accuracy the future fate of the pan-tropical carbon sink,” he said.