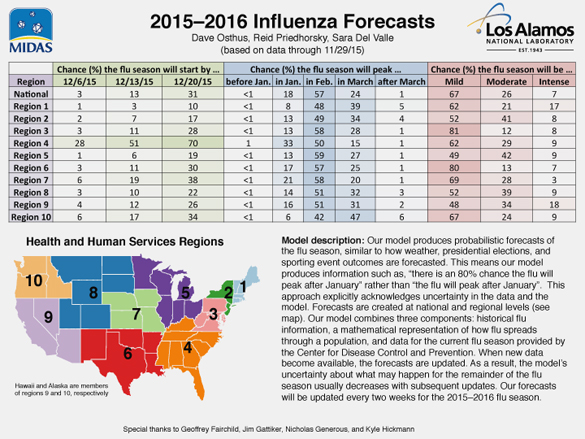 The flu season will likely peak in February in most parts of the United States, according to a model developed by scientists at Los Alamos National Laboratory. Using historical data, a mathematical representation of how flu spreads through a population, and data for the current flu season provided by the Centers for Disease Control and Prevention, the scientists were able to create a probabilistic model forecasting the flu season.

“There’s no crystal ball when it comes to predicting disease outbreaks,” said Sara Del Valle, the Los Alamos scientist who leads the project. “Holiday travel and the rate at which people get flu shots can change the forecast, so we’ll continue to update the model as new information becomes available. But as of now, there’s a less than 5 percent chance the peak will hit before 2016 in all parts of the U.S. This makes it a relatively mild start to the flu season compared to recent years.” Last season, flu incidence peaked in late December.

The Los Alamos team’s model is an ongoing research project that forecasts the current flu season probabilistically, similar to best-practice forecasts of weather, presidential elections, and sporting events. In the coming months, the model will also incorporate Wikipedia searches to refine its forecasts.

Del Valle and her team have learned that Wikipedia article access logs are shown to highly correlate with historical influenza-like illness (ILI) records and allow for accurate prediction of ILI data several weeks before it becomes available. Previous results showed that prior to the peak of the flu season, their forecasting method accurately projected the actual outcome.

According to the CDC, seasonal influenza affects up to 20 percent of people in the United States and causes major economic impacts resulting from hospitalization and absenteeism. Understanding influenza or other infectious disease dynamics and forecasting their impact are fundamental for developing better prevention and mitigation strategies.

“Each year, annual flu epidemics with variable timing and intensity occur in the United States and around the world,” said Matt Biggerstaff, epidemiologist with the Flu Division of the CDC. “Early insights into the timing and intensity of the flu season could be very useful to public health officials for vaccination campaigns, communicating to the public, allocating resources, and implementing strategies to combat the spread of flu disease.”