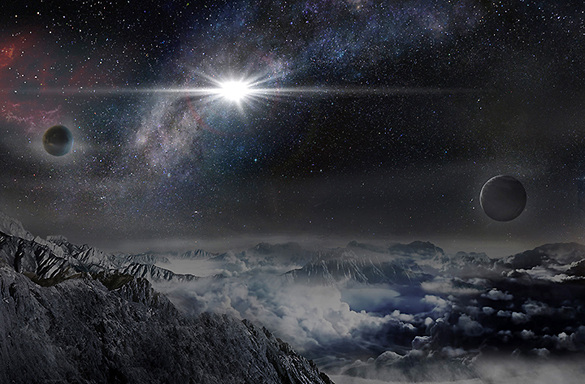 An artist’s impression of the record-breaking superluminous supernova ASASSN-15lh as it would appear from an exoplanet about 10,000 light years away in the host galaxy of the supernova. Courtesy/Beijing Planetarium – Jin Ma 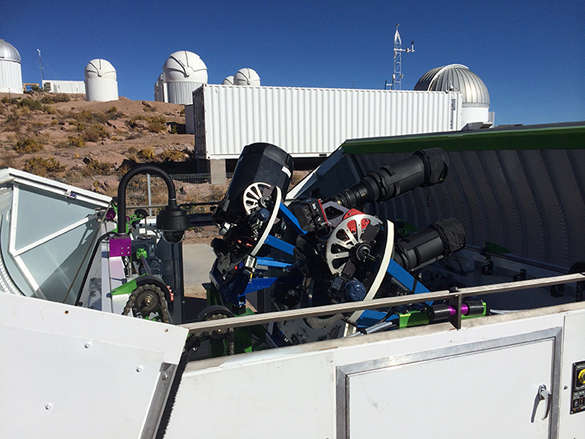 Two of the 14-centimeter diameter lens telescopes in use for the All Sky Automated Survey for SuperNovae (ASAS-SN) that discovered ASASSN-15lh. Since this photo was taken, two more telescopes have been added to the ASAS-SN station in Cerro Tololo, Chile. Courtesy/Wayne Rosing

Machine-learning technology developed at Los Alamos National Laboratory played a key role in the discovery of supernova ASASSN-15lh, an exceptionally powerful explosion that was 570 billion times brighter than the sun and more than twice as luminous as the previous record-holding supernova.

This extraordinary event marking the death of a star was identified by the All Sky Automated Survey for SuperNovae (ASAS-SN) and is described in a new study published today in Science.

“This is a golden age for studying changes in astronomical objects thanks to rapid growth in imaging and computing technology,” said Przemek Wozniak, the principal investigator of the project that created the software system used to spot ASASSN-15lh. “ASAS-SN is a leader in wide-area searches for supernovae using small robotic telescopes that repeatedly observe the same areas of the sky looking for interesting changes.”

ASASSN-15lh was first observed in June 2015 by twin ASAS-SN telescopes, just 14 centimeters in diameter, in Cerro Tololo, Chile. While supernovae already rank among the most energetic explosions in the universe, this one was 200 times more powerful than a typical supernova. The event appears to be an extreme example of a “superluminous supernova,” a recently discovered class of rare cosmic explosions, most likely associated with gravitational collapse of dying massive stars. However, the record-breaking properties of ASASSN-15lh stretch even the most exotic theoretical models based on rapidly spinning neutron stars called magnetars.

“The grand challenge in this work is to select rare transient events from a deluge of imaging data in time to collect detailed follow-up observations with larger, more powerful telescopes,” Wozniak said. “We developed an automated software system based on machine-learning algorithms to reliably separate real transients from bogus detections.”

This new technology will soon enable scientists to find ten or perhaps even hundred times more supernovae and explore truly rare cases in great detail. Since January 2015 this capability has been deployed on a live data stream from ASAS-SN.

Los Alamos also is developing high-fidelity computer simulations of shock waves and radiation generated in supernova explosions. As explained by Chris Fryer, a computational scientist at Los Alamos who leads the supernova simulation and modeling group, “By comparing our models with measurements collected during the onset of a supernova, we will learn about the progenitors of these violent events, the end stages of stellar evolution leading up to the explosion, and the explosion mechanism itself.”

The next generation of massive sky monitoring surveys is poised to deliver a steady stream of high-impact discoveries like ASASSN-15lh. The Large Synoptic Survey Telescope (LSST) expected to go on sky in 2022 will collect 100 Petabytes (100 million Gigabytes) of imaging data. The Zwicky Transient Facility (ZTF) planned to begin operations in 2017 is designed to routinely catch supernovae in the act of exploding. However, even with LSST and ZTF up and running, ASAS-SN will have a unique advantage of observing the entire visible sky on daily cadence. Los Alamos is at the forefront of this field and well prepared to make important contributions in the future.

The development of the machine-learning technology was funded through LANL’s Laboratory Directed Research and Development program.

More information is available from the ASAS-SN webpage: http://www.astronomy.ohio-state.edu/~assassin/index.shtml. All Sky Automated Survey for SuperNovae (ASAS-SN) is an international collaboration headquartered at The Ohio State University. Based on a study led by Subo Dong, an astronomer at the Kavli Institute for Astronomy and Astrophysics (KIAA) at Peking University.