LANL Looks To Community For Next Generation Workforce 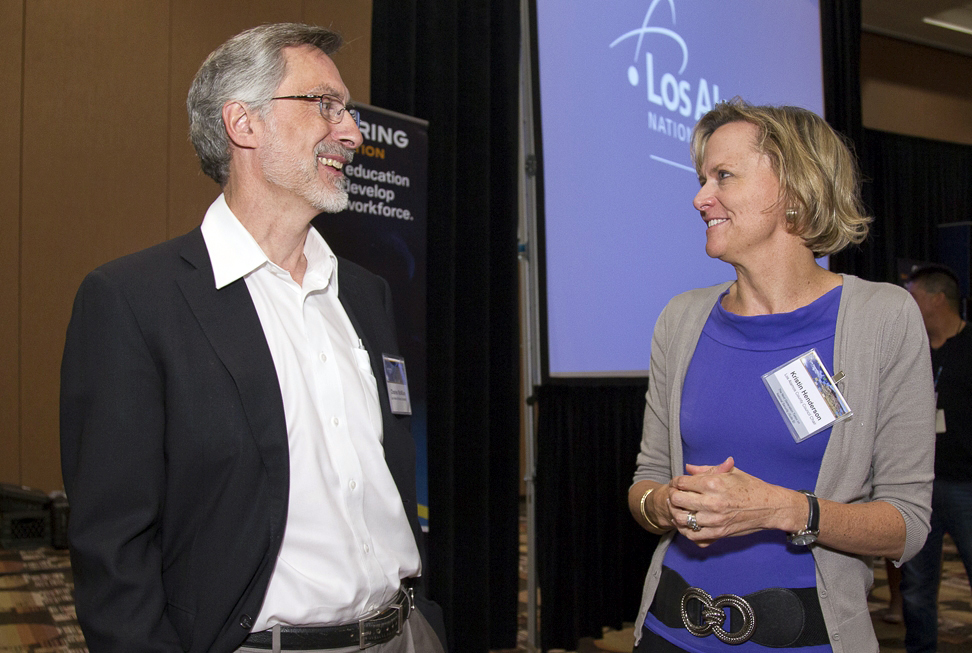 Ohkay Owingeh – An implicit theme of a community breakfast meeting at the pueblo conference center Wednesday had to do with work, workers and the variables that make employment attractive and possible at Los Alamos National Laboratory.

Current concerns include the federal budget, the pace of laboratory projects and priorities, the race between recruitment and retention, and the ongoing tussle between jobs available and attracting and preparing the best people possible.

For Los Alamos National Laboratory employees, the work year rises and sets with the federal budget, which is due to be passed or at least extended by the end of September. Sept. 30 of every year is the end of the line unless there is a ticket forward, just as Oct. 1 is the first day of a brand new cycle. So far, there has not been agreement on any of the 12 national appropriation bills next year.

LANL Director Charlie McMillan said the distribution of types of work at the laboratory has been “relatively stable” for the last six years. Although the number of jobs declined in 2012 with a Voluntary Separation Program, he expects the percentage of job types at the lab to stay about the same under steady funding:

If funding remains stable, the lab will need to replace workers of all these types who leave over the next five years.  Relying on its partners, the institutions of higher learning and the New Mexico State government, the laboratory’s goal is to have 36 percent of early career employees in its workforce that have graduated from New Mexico institutions.

“We’re going to need some highly skilled R&D folk,” McMillan said. “We’re clearly going to be bringing in technicians and there’s going to be a broadband in the middle that involves our business and operations folks that we’re going to need long into the future. It may vary a few percent from one way or another, but this is what the lab is going to be looking for.” 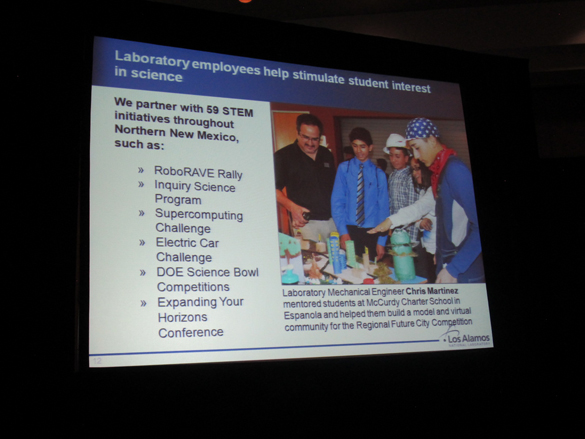 To maintain that commitment, the lab engages with the community with a variety of in-school training and enrichment programs that emphasize science, technology, engineering and mathematics (STEM), while stimulating extracurricular interests through a variety of competitions, conferences and student challenges.

One of the programs the laboratory uses to attract technical talent has been the Laboratory Directed Research and Development Program. LDRD Program Director William Priedhorsky warned that the budget for this program has been “cut back about 20 percent in the last few years,” but the program continues to support many early career employees and postdocs in new research projects. Break-out sessions later in the morning focused on a number of individual “Stories of Science in New Mexico: People, Passions and Pathways.”

In one of the sessions, “From Plato to Einstein: An Unconventional Path to a Scientific Career,” Bruce Carlsten of the lab’s Accelerator and Operations Technology Division,” was asked about the programfor students. “The laboratory has a high school coop program. Then it has a UGS program for undergraduate students,” he said.“Then it has a post-bac (post-baccalaureate)program which is a one year program for people who have graduated but are not yet in grad school. Then it has a graduate program. Sometimes it takes work, but all students at all levels can contribute.”

Kim Davis Lebak,field office manager for the National Nuclear Security Administration that supervises the laboratory contract, said NNSA’s budget request for FY2016 was $12.66 billion, which is $1.2 billion more than this year and would represent a 10.2 percent increase. LANL’s portion of the request would increase from $1.87 billion this year to $1.95 billion, not quite a 4 percent increase.

As investments demonstrating NNSA commitments to the lab’s future, she pointed to a $1.8 billion to $2.5 billion construction program including the Transuranic Waste Facility project, Technical Area 55 Reinvestment project and the Radiological Low Level Liquid Waste Facility Upgrade and the Low Level Liquid Waste project. These are projects that will extend into the early 2020s.