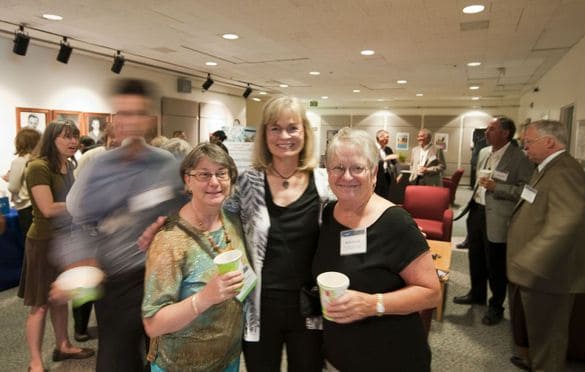 LANL community breakfast events are held periodically. The focus of this event was LANL’s partnerships with industry and governments.

Presenters at the breakfast meeting described how LANL is perfectly setup to do groundbreaking basic research. By applying unique know-how, advanced knowledge and training to basic industrial problems, the Lab is positioned to prosper by partnering with industry and governments in order to solved critical problems that affect the nation’s national security.

Wallace noted that the Lab had specialized skills and was especially adept at “predictive capabilities.”  In fact, Wallace went on to predict that “the monsoon would start tomorrow” … He was off by a day as it soon began to pour rain.

Wallace noted that the Lab employs approximately 10,700 people, which is a reduction in workforce from the mid 2,000 highs and nearer to the Lab’s employment levels of the late 90’s.

MBA student Ronnie Bell asked about the future of the Lab. Bell expressed concern about reductions in workforce. Bell noted that he personally had multiple employment opportunities other than at LANL and wanted to know what the future held for Interns like himself at the Lab.

Wallace noted that the Laboratory relies heavily on the Intern student and Post Doc “pipeline” to staff LANL, hiring 83 percent from this pipeline.

Wallace predicted this source of hiring would not change significantly in the future.

LANL Director Charlie McMillan stood up and said, “yes, the Lab has a great future ahead … will it look the same as now, no.”

McMillian noted that the deterrents responsibility of the Lab would extend beyond “my career and yours.”

Wallace noted that if congress allows the national budget sequestration procedure to go into effect, without any mediation, that a 10 percent across the board U.S. budget cut would reduce staffing levels at the Lab.

Wallace also noted that the lab was uniquely positioned for the future with the largest Post Doc work force of all the national laboratories. Post Docs are 448 of the approximately 10,700 LANL employees.

Santa Fe Mayor David Coss asked about the effect the delayed or cancelled CMRR-NF building would have on the work force, if production was to move to other facilities.

The answer was that LANL could lose jobs to other facilities. Wallace noted that if the Mixed-Oxide Plutonium Fuel MOX facility were moved to the Savanna or Livermore labs, there would be a loss of perhaps $100 million to $150 million in funding at LANL, which would cost jobs.

McMillan said that LANL is the NNSA nuclear complex center of excellence for plutonium science and manufacturing and that status is not changing.

A question about LANL procurement levels brought a response saying changes in procurement patterns had brought them down by more than $100 million. (Reductions in procurements hurt LANL contractors and suppliers financially.)

San Ildefonso Gov. Terry Aguilar questioned LANL leadership about creating a better partnering relationship between the pueblo and the Lab. Aguilar noted that communities around the pueblo are growing and the activities at the Lab affect the pueblo as well as the entire region.

Aguilar asked how the pueblo and Lab could work together better on long range planning as the Lab’s activities are impacting growth in the region.

Wallace replied that the success of LANL required better synergy with all of Northern New Mexico.

Wallace committed to better planning to communicate where LANL is headed. He said that in the past, a high of 72 percent of Laboratory employees lived in Los Alamos County. Now that figure is below 50 percent.

Wallace said that the issue of roads and transportation were important between the pueblo and the Lab, pointing out that the Pueblo of San Ildefonso owns the property that the road to White Rock sits on.

NNSA Los Alamos Site Office Deputy Manager Juan Griego admitted that long range planning had not been very effective in the past. He noted that the Lab is doing a much better job with environmental planning now.

Griego committed to better communications in the future and to work better as a team with regional partners.

When asked about an expansion of research disciplines at the Lab, McMillian stated that LANL is a “National Security” Lab – period.

McMillian went on to say that national security is a broad topic.  He said that the United State must double its energy production in 20 years, at the current rate of growth in consumption.

The director also discussed issues of water quality and access. He said that future wars may be fought over these water issues.

McMillian said that he sees the Lab as having the right resources, the right educational backgrounds and the right information gathering capabilities to tackle the broad range of national security issues in today’s rapidly changing world.

To sum up the bottom line takeaways from the speakers:

Wallace also announced that on Aug. 5, the NASA Curiosity Rover would touch down on Mars. A few days later the Rover would begin exploring the chemical make-up of the planet’s surface using the LANL developed ChemCam laser. (Read more about Curiosity and ChemCam HERE.)

After the morning’s formal presentations were completed, community guests were divided into four groups for specialized Lab tours.

Editor’s note: Part two of this report will explore in greater detail the fuel cell and Chevron partnership tour.