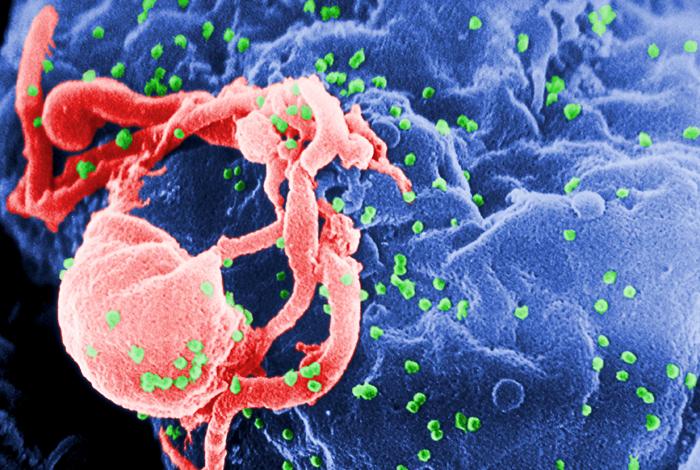 Researchers at Los Alamos National Laboratory are investigating the complex relationships between the spread of the HIV virus in a population (epidemiology) and the actual, rapid evolution of the virus (phylogenetics) within each patient’s body.

“We have developed novel ways of estimating epidemics dynamics such as who infected whom, and the true population incidence of infection versus mere diagnoses dates,” said Thomas Leitner, principal investigator. “Obviously, knowledge about these things is important for public health monitoring, decision making and intervention campaigns, and further to forensic investigations.”

The team models the uninfected population using traditional differential equations on the computer; this is done for computational speed, because an agent-based component is much more demanding. Once a person is infected, he/she becomes an “agent” in computer modeling terms, and the model starts following their behavior individually, as well as the viral HIV evolution within the person.

This new modeling approach distinguishes between susceptible and infected individuals to capture the full infection history, including contact tracing data for infected individuals. The uninfected individuals are modeled at a population level and stratified by transmission risk and social group. The social network in this model forms – and can change – during the simulation. Thus, the model is much more realistic than traditional models.

The advantage of this epidemiological model, Leitner said, is that “it allows us to simulate many possible outcomes of epidemics with known parameters of human interactions, where social networks form as part of the agent interactions. It is a flexible system that has the ability to describe realistic human populations.”

Within a National Institutes of Health-supported project “Reconstructing HIV Epidemics from HIV Phylogenetics,” the team has published 10 papers describing new mathematical models and results from real data addressing these issues. Most recently, they published a Nature correspondence on the limitations of HIV forensics and the need for better standards.

A key question is on the fundamental limitations to the inference of who infected whom, based on a concept known as the pre-transmission interval (which this group first described back in 1999). Another publication, published in Epidemics, developed a new hybrid model to simulate and analyze the spread of HIV or other pathogens spread in a human population. The work also appeared in PLoS-ONE Public Library of Science online publication.

As an example, the team modeled a Latvian HIV-1 epidemic, and they showed that injecting drug users fueled the heterosexual population, thereby sustaining the overall epidemic. The researchers are now expanding this hybrid model to also include HIV genetic evolution, which occurs in every infected individual.

The researchers have shown that in fast HIV epidemics – such as among individuals injecting themselves with drugs – HIV viral evolution is slow, resulting in little diversification at the population level. Meanwhile, slower-spreading epidemics display more HIV evolution over the same amount of time.

The team also has developed a new mathematical model that facilitates estimation of when a person was infected with HIV based on a previously used biomarker (BED IgG).

“This is important because most HIV infected persons are not discovered shortly after infection rather, they are often discovered long after, often years after infection, said Leitner. “Thus, to estimate true incidence, that is when infections actually occurred, cannot be done based on diagnosis dates.”

Using Swedish surveillance data, the team has shown that the common assumption that infection occurred on average half way between last negative test and first positive test, is wrong. Instead, the actual infection is strongly skewed towards the first positive sample.

This finding should have large impact on epidemiological models used worldwide by public health organizations, Leitner says. “Currently, we have further developed this model to also correct for unknown cases, such as infected people not yet discovered but who contribute to new infections and thereby the true incidence of the disease.”

The Team Behind the Insights