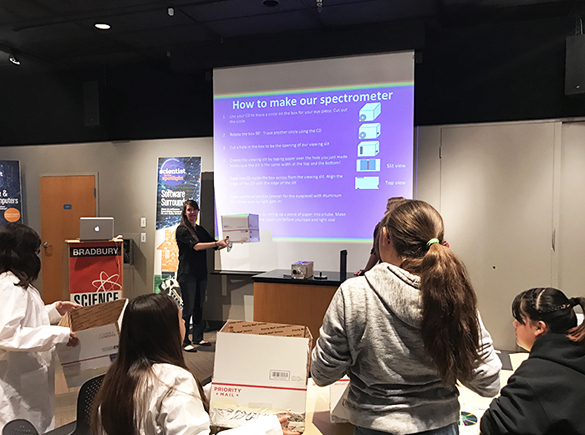 Girls from a Northern New Mexico school look on as Amanda Madden, of LANL’s Space Science & Applications group, demonstrates how to build a spectrometer. Courtesy/LANL

“Our hope is that as attitudes improve, girls will be more likely to pursue challenging STEM coursework in secondary and post-secondary schools, and that they might pursue a career in STEM whether it is at the Lab or elsewhere,” Coronado said. “We aim to put the Laboratory on the map outside of the hard sciences and show the effect that merging technical and social sciences can have on our community.”

According to the National Science Foundation, there are more men in STEM fields than women. While most STEM education programs begin at the middle or high school levels, Coronado and Neal believe that engaging girls in STEM earlier will be more effective.

As part of the project, Coronado and Neal will be working with a team of scientists from the Laboratory to create and implement fun and exciting STEM projects designed to pique girls’ interest in the many fields represented at Los Alamos. Some of these projects include making silly putty, learning about drones, creating a solar system and making spectrometers.

Abiquiu Elementary was awarded a grant to host a one-week summer seminar on STEM for sixth-grade girls; it will be one of the first to host an event for the Girls in STEM project. The week-long seminar begins June 5.

In addition, a special Girls in STEM Summer Session event will be held at Ghost Ranch on June 8, where girls will apply what they have learned in the project.

The LANL Foundation fully funded the Girls in STEM summer seminar series with a $2,500 grant.

Since 1997, the Los Alamos National Laboratory Foundation, a 501(c)(3) nonprofit, has worked to inspire excellence in education and learning in Northern New Mexico through innovative programming, collaboration and advocacy. By investing in human potential, the Foundation’s vision is that all New Mexicans have the skills and confidence they need to be self-sufficient, lifelong learners who are engaged in their communities. Programs in early childhood education, STEM inquiry learning, scholarships and small grants serve Northern New Mexico communities primarily in Los Alamos, Mora, Rio Arriba, San Miguel, Sandoval, Santa Fe and Taos counties.