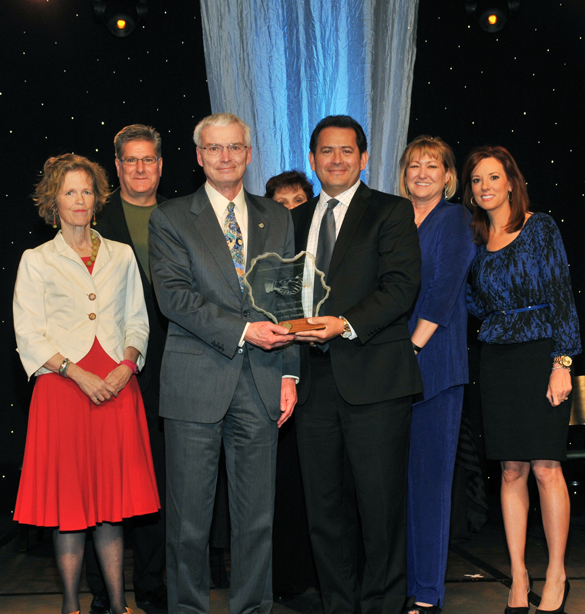 ESPANOLA— The Los Alamos National Laboratory (LANL) Foundation is please to announce that it is the recipient of the 2015 Dennis J. Woywood Compañero Recognition from Quality New Mexico (QNM).

LANL Foundation was nominated by Gene Schmidt, former superintendent of Los Alamos Public Schools (LAPS), for the work of Foundation Board Chair Dr. Bill Wadt in assisting the district with its continuous improvement process and application to the New Mexico Performance Excellence Awards.

Quality New Mexico provides tools for businesses and organizations to successfully accomplish their mission and vision by driving performance excellence. The Dennis J. Woywood Compañero Recognition is awarded by QNM to organizations that partner with others to assist and guide them on hteir performance improvement journey.

“We are proud to receive this award from Quality New Mexico. Many have helped the LANL Foundation on its journey toward excellence, and we are happy that Bill Wadt and his technical expertise could guide the Los Alamos Public Schools with their continuous improvement process,” LANL Foundation CEO Jenny Parks said. “Bill’s volunteer work with the district aligns with the Foundation’s ‘pay it forward’ spirit. We hope to continue to lead by example and assist other organizations in a similar way in the future.”

Wadt’s collaboration with Schmidt and LAPS began in 2011 with strategic planning, during which time a Continuous Improvement Team was formed within the district. The team oversaw and supported Schmidt and the School Board with development and implementation of the strategic plan. Also involved was Terry Holliday, Commissioner of Education for the State of Kentucky and a former superintendent who led the Iredell-Statesville School District in North Carolina to the 2008 Malcolm Baldrige National Quality Award.

“It is always an honor and a pleasure to work with and support educational leaders, such as Gene Schmidt, who are passionately committed to learning and improving the opportunities for their students, teachers and staff,” Wadt said.

Previously, Wadt and Schmidt worked together on advancing the educational system in New Mexico through their service on the Board of Quality New Mexico and support of its New Mexico Excellence in Learning initiative. A key focus area was sharing strategic planning and best practice experiences with other superintendents.

In addition to extensive internal review of the organizational profile required by the Performance Excellence Awards application, feedback from the QNM review team serves as a guide for further process improvement opportunities.

The LANL Foundation also has received three Piñon Recognitions from QNM in 2007, 2011 and 2013, highlighting continuous improvement efforts in service delivery, operational procedures and response to customer and stakeholder needs.

The LANL Foundation is a 501 (c)(3) nonprofit created in 1997 in recognition of the interdependence of Los Alamos National Laboratory and Northern New Mexico communities. The vision for the Foundation is to serve as a catalyst and leader for successful innovation in community and educational endeavors, engaging the region in creating excellence in education.