LANL: Flipping the Switch on Magnetism in Strontium Titanate 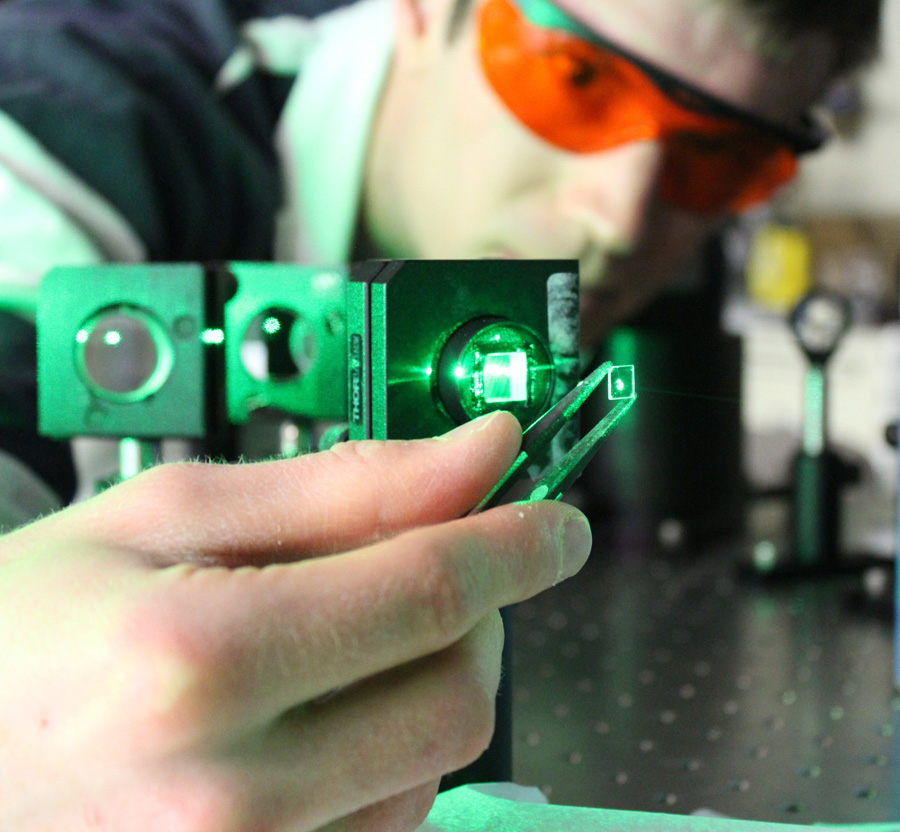 Los Alamos postdoctoral fellow William Rice holds a crystal of strontium titanate up to the light. This crystal, previously thought to be nonmagnetic, turns out to have surprising magnetic features when treated with special “circularly polarized” light. Courtesy/LANL

One of the most important materials in this burgeoning field is strontium titanate (SrTiO3), a nominally nonmagnetic wide-bandgap semiconductor, and researchers at Los Alamos National Laboratory have found a way to magnetize this material using light, an effect that persists for hours at a time.

“One doesn’t normally think of this material as being able to support magnetism. It’s supposed to be useful – but magnetically uninteresting – stuff. So when we started shining light on it and saw what appeared to be extremely long-lived magnetic signals – that persisted for hours even after we turned the light off – it came as quite a surprise,” said Scott Crooker, lead scientist on the project at Los Alamos.

Studies of strontium titanate’s electrical and optical properties abound, it’s not a new material – in fact it was marketed in the 1950s and ‘60s as a “faux diamond” product before cubic zirconium gained popularity. Though often used in industry for its robust dielectric properties, its potential magnetic properties were less well understood. A renewed interest in SrTiO3 was recently sparked by observations of an unexpected and emergent magnetization in strontium titanate-based structures.

“There’ve been tantalizing hints in recent years that there might be more to SrTiO3 than originally thought. When layered with other ‘nominally non-magnetic’ oxides, a handful of recent experiments around the world have shown not only superconductivity but also an unexpected magnetism. So that piqued our interest in this material,” Crooker said.

“This is really something completely new in oxide materials like these – the ability to write permanent magnetic patterns into an otherwise non-magnetic material. The challenge will be to properly understand how and why this works, and to increase the temperature at which it can be done. The exciting possibility is to potentially use this to store data in some way,” said collaborator Chris Leighton of the University of Minnesota.

In a paper published this week in Nature Materials, Crooker and collaborators illustrated a new aspect to the nature of magnetism in strontium titanate, reporting the observation of an optically induced and persistent magnetization in crystals of SrTiO3 when they are slightly oxygen-deficient.

These signals appear below 18 Kelvin, persist for hours below 10 K, and can be controlled in both magnitude and sign via the circular polarization and wavelength of blue/green light in the range spanning 400-500 nm. As such, magnetic patterns can be “written” into SrTiO3, and subsequently read out, using light alone. These effects occur only in crystals containing oxygen vacancies, revealing a detailed interplay between magnetism, lattice defects and light in an archetypal complex oxide material.

This work was funded by Laboratory Directed Research and Development Exploratory Research at Los Alamos National Laboratory under the auspices of the US DOE Office of Science.