LANL: First Detection Of Boron On Surface Of Mars 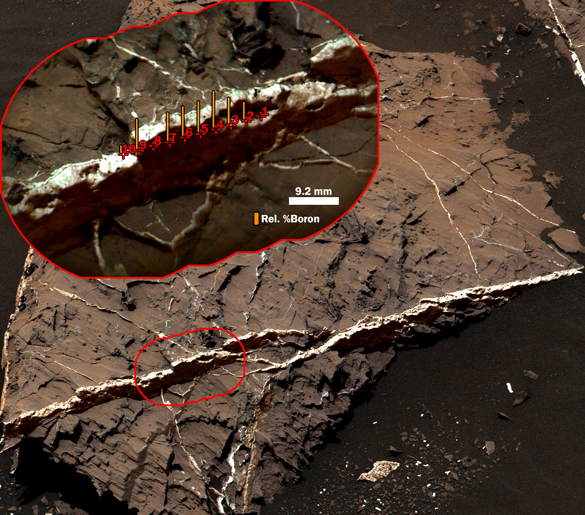 ChemCam target Catabola is a raised resistant calcium sulfate vein with the highest abundance of boron observed so far. The red outline shows the location of the ChemCam target remote micro images (inset). The remote micro images show the location of each individual ChemCam laser point (red crosshairs) and the B chemistry associated with each point (colored bars). The scale bar is 9.2 mm or about 0.36 inches. Courtesy/JPL-Caltech/MSSS/LANL/CNES-IRAP/William Rapin

Boron has been identified for the first time on the surface of Mars, indicating the potential for long-term habitable groundwater in the ancient past. This finding and others from NASA’s Curiosity rover science team will be discussed in a press conference today in San Francisco during the American Geophysical Union conference.

“No prior mission to Mars has found boron,” said Patrick Gasda, a postdoctoral researcher at Los Alamos National Laboratory. “If the boron that we found in calcium sulfate mineral veins on Mars is similar to what we see on Earth, it would indicate that the groundwater of ancient Mars that formed these veins would have been 0-60 degrees Celsius [32-140 degrees Fahrenheit] and neutral-to-alkaline pH.” The temperature, pH, and dissolved mineral content of the groundwater could make it habitable. (Watch video here.)

The boron was identified by the rover’s laser-shooting Chemistry and Camera (ChemCam) instrument, which was developed at Los Alamos National Laboratory in conjunction with the French space agency. Los Alamos’ work on discovery-driven instruments like ChemCam stems from the Laboratory’s experience building and operating more than 500 spacecraft instruments for national defense.

Boron is famously associated with arid sites where much water has evaporated away—think of the borax that mule teams once hauled from Death Valley. However, environmental implications of the boron found by Curiosity are still open to debate. Scientists are considering at least two possibilities for the source of boron that groundwater left in the veins: It could be that the drying out of part of Gale lake resulted in a boron-containing deposit in an overlying layer, not yet reached by Curiosity. Some of the material from this layer could have later been carried by groundwater down into fractures in the rocks. Or perhaps changes in the chemistry of clay-bearing deposits and groundwater affected how boron was picked up and dropped off within the local sediments.

The discovery of boron is only one of several recent findings related to the composition of Martian rocks. Curiosity is climbing a layered Martian mountain and finding rock-composition evidence of how ancient lakes and wet underground environments changed, billions of years ago, in ways that affected their favorability for microbial life.

As the rover has progressed uphill, compositions trend toward more clay and more boron. These and other variations can tell us about conditions under which sediments were initially deposited and about how later groundwater moving through the accumulated layers altered and transported ingredients.

Groundwater and chemicals dissolved in it that appeared later on Mars left its effects most clearly in mineral veins that filled cracks in older layered rock. But it also affected the composition of that rock matrix surrounding the veins, and the fluid was in turn affected by the rock.

“There is so much variability in the composition at different elevations, we’ve hit a jackpot,” said John Grotzinger, of Caltech, Pasadena, Calif. As the rover gets further uphill, researchers are impressed by the complexity of the lake environments when clay-bearing sediments were being deposited and also by the complexity of the groundwater interactions after the sediments were buried.

“A sedimentary basin such as this is a chemical reactor,” Grotzinger said. “Elements get rearranged. New minerals form and old ones dissolve. Electrons get redistributed. On Earth, these reactions support life.”

Whether Martian life has ever existed is still unknown. No compelling evidence for it has been found. When Curiosity landed in Mars’ Gale Crater in 2012 the mission’s main goal was to determine whether the area ever offered an environment favorable for microbes.

Four recent drilling sites, from “Oudam” this past June through “Sebina” in October, are spaced about 80 feet (about 25 meters) apart in elevation. This uphill pattern allows the science team to sample progressively younger layers that reveal Mount Sharp’s ancient environmental history.

“Variations in these minerals and elements indicate a dynamic system,” Grotzinger said. “They interact with groundwater as well as surface water. The water influences the chemistry of the clays, but the composition of the water also changes. We are seeing chemical complexity indicating a long, interactive history with the water. The more complicated the chemistry is, the better it is for habitability. The boron and clay underline the mobility of elements and electrons, and that is good for life.”