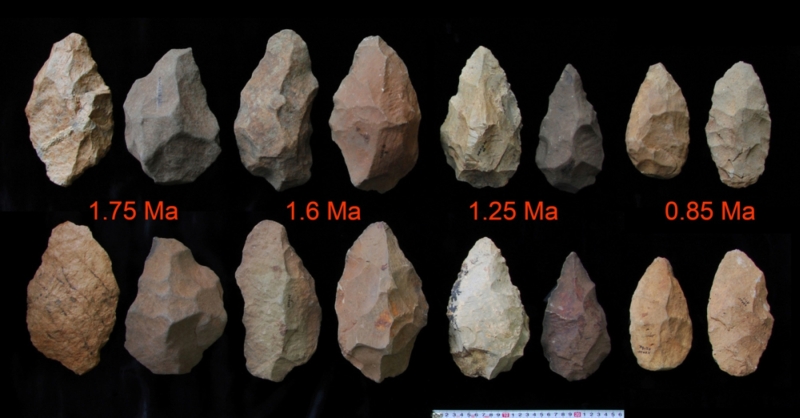 Stone Age man’s gradual improvement in tool development, particularly in crafting stone handaxes, is providing insight into the likely mental advances these early humans made a million years ago.

Better tools make for better hunting, and better tools come from more sophisticated thought processes. Close analysis of bits of chipped and flaked stone from across Ethiopia is helping scientists crack the code of how these early humans thought over time.

Their observation of improved workmanship over time indicates a distinct advance in mental capabilities of the residents in the entire region, with potential impacts in tool-development skills, and in overall spatial and navigational capabilities, all of which improved their hunting adaptation.

“Even though fossil remains of the tool makers are not commonly preserved, the handaxes clearly archive the evolution of innovation in craftsmanship, acquired intelligence and social behavior in a pre-human community over a million-year interval,” WoldeGabriel said.

The scientists determined the age of the tools based on the interlayered volcanic ashes with the handaxe-bearing sedimentary deposits in Konso, Ethiopia.

Handaxes and other double-sided or bifacial tools are known as the first purposely-shaped tools made by humanity and are closely associated with Homo erectus, an ancestor of modern humans.

A paper in a special series of inaugural articles in the Proceedings of the National Academy of Sciences USA, “The characteristics and chronology of the earliest Acheulean at Konso, Ethiopia,” described their work.

Some experts suggest that manufacturing three-dimensional symmetric tools is possible only with advanced mental-imaging capacities.

Such tools might have emerged in association with advanced spatial and navigational cognition, perhaps related to an enhanced mode of hunting adaptation.

Purposeful thinning of large bifacial tools is technologically difficult, the researchers note. In modern humans, acquisition and transmission of such skills occur within a complex social context that enables sustained motivation during long-term practice and learning over a possible five-year period.

Making the right tools for the job

Researchers observed that the handaxes’ structure evolved from thick, roughly-manufactured stone tools in the earliest period of Acheulean tool making, approximately 1.75 million years ago to thinner and more symmetric tools around 0.85 Ma or megaannum, a unit of time equal to one million years.

The Acheulean is a stone-age technology named after a site in France where handaxes from this tradition were first discovered.

The chronological framework for this handaxe assemblage, based on the ages of volcanic ashes and sediments, suggests that this type of tool making was being established on a regional scale at that time, paralleling the emergence of Homo erectus-like hominid morphology.

The appearance of the Ethiopian Acheulean handaxes at approximately 1.75 Ma is chronologically indistinguishable from similar tools recently found west of Lake Turkana in northern Kenya, more than 125 miles to the south.

“To me, the most intriguing story of the discovery is that a pre-human community lived in a locality known as Konso at the southern end of the Ethiopian Rift System for at least a million years and how the land sustained the livelihood of the occupants for that long period of time.

In contrast, look at what our species has done to Earth in less than 100,000 years – the time it took for modern humans to disperse out of Africa and impose our voracious appetite for resources, threatening our planet and our existence,” WoldeGabriel said.

WoldeGabriel is a specialist in field and volcanic geology and geochronology, and together with his research collaborators examined the scattered geologic sections in which early hominid fossils and tools are found.

Through geological fieldwork, volcanic ash chemistry and geochronology, he helps to rebuild the time and space framework of the paleo landscape.

In addition to the Konso research project, WoldeGabriel is also co-leader and lead geologist of the Middle Awash project, a collaborative research project in Ethiopia of the Institute of Geophysics, Planetary Physics and Signatures and University of California, Berkeley, which has recovered the fossil remains of at least eight species, including some of the earliest hominids, spanning the past six million years.

The Institute of Geophysics, Planetary Physics and Signatures provided partial funding for the Los Alamos research.