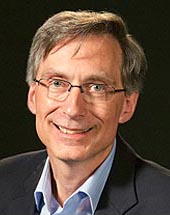 McMillan was the guest of honor at the annual alumni awards banquet held in Bethesda, Md., April 13.

In a brief address to the gathering, McMillan paid tribute to WAU’s emphasis on service as a valuable part of the learning experience. He said he was pleased to note that the Gateway, the University’s iconic emblem of service, remains on the campus. His graduating class, the class of 1977, replaced it after it was destroyed by fire in 1970.

“Service of the highest level requires education of the best quality,” McMillan said. “Education is not just about the acquisition of knowledge; it is about asking the right questions and how to know if the answers make sense.”

Integrity, quality and a strong STEM (Science, Technology, Engineering and Mathematics) education are increasingly critical to students’ success in the world today, he said.

McMillan graduated from Washington Adventist University, then Columbia Union College, in 1977, with a Bachelor of Arts in Mathematics and Physics. Upon graduation, he taught for a year at Rusangu Secondary School in Zambia after which, he earned his doctoral degree in physics from the Massachusetts Institute of Technology (MIT).

He began his career in 1983 as an experimental physicist at Lawrence Livermore National Laboratory (LLNL) in California. He later moved into computational science and management at LLNL before joining Los Alamos in 2006 as associate director for weapons physics. In that capacity, he oversaw the safety, reliability and performance of the U.S. nuclear deterrent, which is the lab’s main mission.

McMillan has earned two Department of Energy Awards of Excellence; one of them for developing an innovative holographic tool that enhances the ability of scientists to predict nuclear performance.

Washington Adventist University is a private liberal arts institution located in scenic Takoma Park, Md. Founded in 1904, it is owned by the Seventh-day Adventist Church and offers a Christian education to nearly 1,500 students of all faiths, through eight graduate and 32 undergraduate programs. Its vision is to produce graduates who bring competence and moral leadership to their communities. The University has been ranked among the best regional colleges in the northern region and as one of the most diverse by U.S. News and World Report.