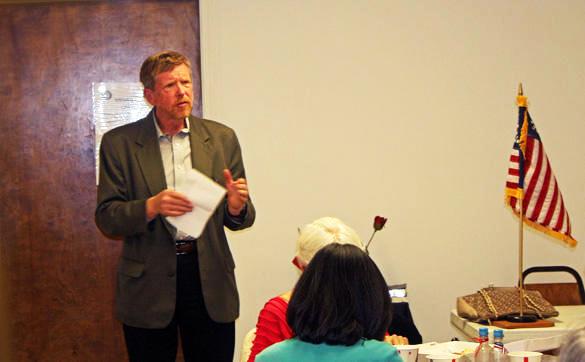 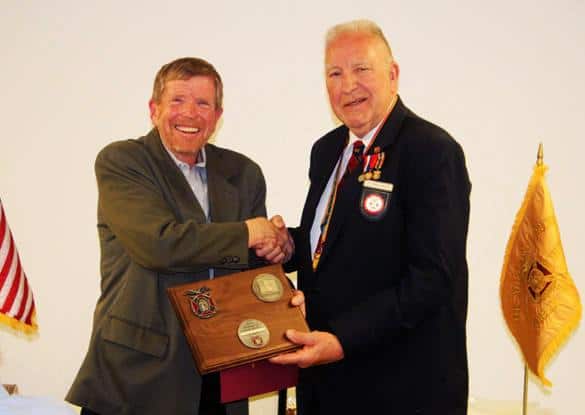 LTC Gregg Giesler, USA (Ret), Commander of the  Major General Franklin E. Miles Chapter 229 of The Military Order of the World Wars Companions presents Dr. Terry C. Wallace, Jr., Director Emeritus of Los Alamos National Laboratory with a plaque and certificate to express the group’s appreciation of Wallace’s talk on the future of war based on his years of distinguished service at LANL in many roles. Photo by Bonnie J. Gordon/ladailypost.com
By BONNIE J. GORDON
Los Alamos Daily Post
bjgordon@ladailypost.com

One of the perks of living in Los Alamos is getting to hear from some of the best minds in the country in an informal setting. Wallace has an especially close relationship will the local MOWW chapter. His father was a member. He was warmly welcomed by Chapter members as an old friend. His topic Tuesday was the future of warfare.

Wallace is well suited to discuss this topic. Before becoming Laboratory Director, Wallace was LANL’s Principal Associate Director for Global Security and the Senior Intelligence Executive, leading national security programs. He has traveled the world representing LANL, meeting with scientists and political leaders from many countries.

He began his talk with some history of the Lab’s national security mission, beginning with the post-war years when the U.S. was the sole nuclear power and into the years of the arms race with the Soviet Union.

“President Eisenhower came up with the idea of deterrence,” Wallace said. “The concept is, we’re going to have a threat that is so serious that no one will attack us.”

Throughout the 1990s, the U.S. sought technological superiority to stay ahead of its enemies, and for a time, achieved it, but other countries, especially China were hot on our heels, Wallace said.

In 2015, by the time Wallace was part of a group at LANL formed to discuss the future of war, the world had changed dramatically, bringing about new challenges to national security quite different from those facing the scientists and politicians of the past, he said.Wallace outlined some of the major threats the U.S. now faces.

He first discussed cyber warfare. Pointing to the catastrophic outcome, if financial markets were interrupted for even one day, and the vulnerability of our power grid. Wallace said a major challenge is making our infrastructure unhackable. Although fiber optics has helped with this, technology is constantly catching up and surpassing attempts at protecting our infrastructure.

The use of large analytic data sets to solve problems and seek solutions has complicated matters, he said.

“We hate it when we see an effect and not know the cause,” Wallace said. “We can see effect in a complex data set, but we don’t know how the answer came about.”

For example, we see a certain pattern and we’re likely to get an earthquake, but the why is a mystery, Wallace said.

Even if we remain on top of the heap, advanced manufacturing has its own problems, Wallace said. It relies on exotic materials the U.S. doesn’t produce.

“Ninety percent of the world’s lithium comes from Bolivia and is controlled by China,” Wallace said, as an example.

There’s also the trade war and the currency war to think about. One of the most troubling to Wallace is the discussion war.

“Our biggest conflict is about truth,” he said.
With people relying on “self selected news” and on social media (73 percent of people in the U.S. get their news from this source) alternate facts need not be considered in one’s analysis, Wallace said. Not only that, technical advances now mean you can’t see it and believe it’s necessarily true.

“Fake video you can’t tell is fake is here,” Wallace said. “You can’t guarantee anything on media has not been changed.”

Economic security is important to us as a nation, but the economy is no longer national, but global, Wallace pointed out. The five largest tech companies that make up the fifth largest economy in the world pay taxes in lots of countries. Are they loyal to any one nation or any nation at all, he asked? Since the mapping of the human genome, China has made a big investment into genetic research, Wallace said. He pointed out that genetic testing services 23&Me and Ancestry.com are partially owned by China.

“Something as simple as the flu can be weaponized to target a specific population,” he said.  “…China does research the U.S. won’t touch.”

The high cost of medical care for an aging population may not be a weapon used against us, but those costs compete with the costs of defending ourselves, Wallace said.

Another problem is that we’re “married to the military industrial complex,” he said. Politics, moneyed interests and inertia in government keep us producing things like tanks that we hardly use instead of using our resources on what we need now.

“Los Alamos National Laboratory is at a crossroads,” Wallace said. “We are in a bigger cusp of change than we’ve ever been in.”